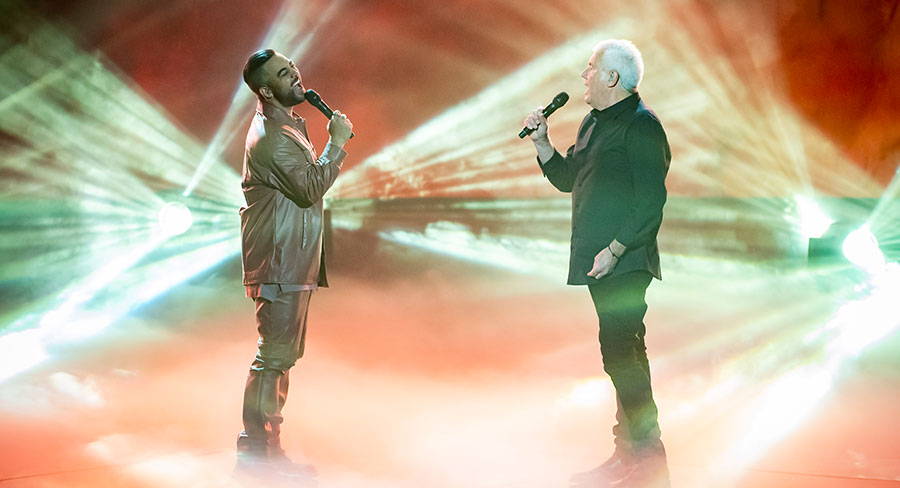 Nine Network is looking to dump some of its more pricey television shows such as The Voice and squeeze more sports rights savings as part of a cost-cutting drive, reports News Corp’s Lilly Vitorovich.

With the free-to-air television market struggling in the wake of a double digit drop in advertising revenue during the coronavirus crisis, the broadcaster’s parent Nine Entertainment is focused on slashing costs.

On an investor call after Nine delivered full-year results on Thursday, chief executive Hugh Marks singled out its singing competition show The Voice, featuring singers Delta Goodrem and Boy George, saying it was a “$40m cost in the schedule”.

“As you go forward those shows just, you know, get a little bit more difficult to hold onto,” Marks said Thursday, adding that Nine is working through its TV program slate for the next couple of years.

Marks later told The Australian that Nine’s long-running renovation competition reality show The Block is “a third of the cost per hour of something like The Voice”, yet delivered an equivalent audience.

“If you look at news and current affairs, it delivers a higher audience than The Voice at significantly reduced cost,” he said.

Nine Entertainment Co boss Hugh Marks has pledged to drive a hard bargain in talks with the NRL over the extension of a key rights deal as he looks to trim more costs from the company’s core television business, reports SMH‘s Zoe Samios.

While Nine was able to secure a reduction in the amount it currently pays the NRL it did not extend its deal with the code beyond 2022.

“Everything needs to pay its way,” Marks said. “What we’d hope is that maybe we can lift NRL performance and maybe that will justify the price. But if it doesn’t perform for us, then everything has to pay its way. That’ll be part of the negotiations when they happen.”

Earnings at the company’s biggest segment, broadcast, which includes its television and radio operations, fell by 35 per cent to $197.3 million.

‘We’re out’: Nine chief says T20 World Cup deal off due to postponement

The volatile atmosphere around sports rights during the COVID-19 pandemic has taken another twist, with Nine arguing its deal to televise cricket’s Twenty20 World Cup in Australia is no longer valid because of the postponement of the tournament, reports SMH‘s Chris Barrett, Andrew Wu and Zoe Samios.

The news comes as a defiant Cricket Australia stood its ground in its high-stakes feud with free-to-air partner Seven West Media, adamant it will not follow in the footsteps of the country’s major football codes by reducing its broadcast riches.

Nine was to be the free-to-air broadcaster of the 16-nation men’s event in October and November but last month it was postponed until 2022.

The way Nine CEO Hugh Marks sees it, the television rights can’t simply be kicked down the road because of the unforeseen events that have pushed the Australian tournament back and led to the World Cup organising committee being disbanded. He has previously questioned the value of one-off sports events but indicated he was open to bidding again for the T20 World Cup in 2022.

“So we will talk to all relevant parties about those rights when they become available again but at this point there is no concrete details, so for the moment we are out.”

Kevin Mayer, the chief executive of the Chinese-owned video app TikTok, said on Wednesday that he was resigning after the company came under sustained pressure from the Trump administration over its ties to China, reports the New York Times Mike Isaac.

In a note to employees, which was reviewed by The New York Times, Mayer said that a series of changes to TikTok’s structure prompted him to leave. The app, which is owned by the Chinese internet company ByteDance, has been ordered by the White House to sell its U.S. operations by mid-September. Mayer, 58, did not address the specific timing of his departure.

“In recent weeks, as the political environment has sharply changed, I have done significant reflection on what the corporate structural changes will require, and what it means for the global role I signed up for,” he wrote in the email. “Against this backdrop, and as we expect to reach a resolution very soon, it is with a heavy heart that I wanted to let you all know that I have decided to leave the company.”

The leading caravan and touring magazine celebrates 50 years of publishing amid the backdrop of a changing industry which is set to be reshaped again post-COVID.

First published in 1970 and having produced over 600 issues, Caravan World has played a critical role in shaping the RV and camping industry in Australia with a loyal readership which has helped the title thrive in the toughest of times for publishing. Retail sales and digital audiences for Caravan World have been strong through the COVID period with sell through rates at 50% (up from 39% for the last 12 months) and web traffic up 60%.

“The ability to continue publishing throughout the COVID-19 pandemic is testament to the strength and value that the Caravan World brand has in the market,” Emprise Group CEO, Rob Gallagher commented.

While many other titles have gone into hibernation or closed over the past six months, the touring magazine is seeing some positive growth in reader numbers and advertising support coinciding with its birthday celebrations.

“It has been a tough time for businesses and consumers over this past year with bushfires, floods and now COVID. We have been buoyed by the support we have received from our industry partners and consumers who love the brand like their own,” Gallagher added.

“No doubt there is going to be some attrition or rationalisation within the caravan manufacturing market as businesses grapple with the financial impact of the pandemic, however, we see a positive future for the market and its consumers.”

“Some businesses will be looking over the precipice with trepidation, we are looking over the edge and seeing a booming domestic touring market and an energised manufacturing base. The brands might just look slightly different to what they do today.”

Published by content and marketing agency, Adventures Group Holdings (AGH), Caravan World will run a series of editorial focused on the changing shape of the industry over the past 50 years. 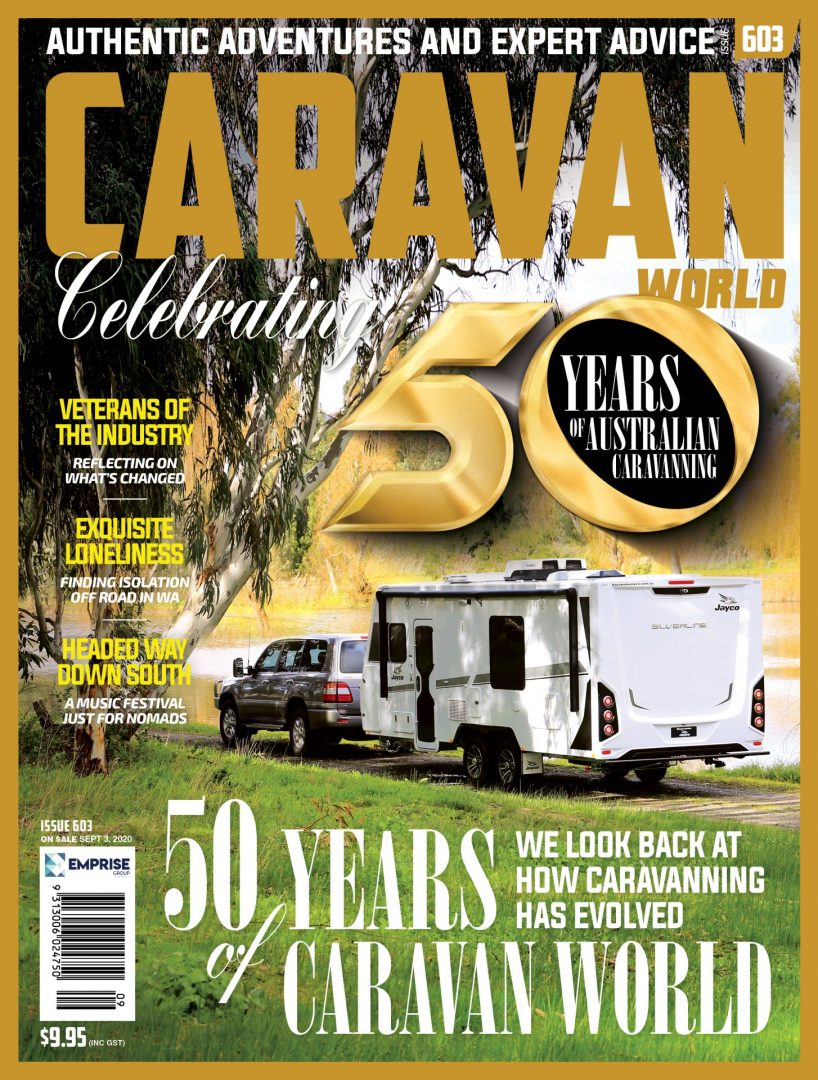 Gerry Ryan, founder of Jayco, commented, “When I first started, the only buyers were the holiday market. Then came the retiree market when people had the money to travel for long lengths of time and wanted to travel around Australia and wanted bigger caravans. Now in the last few years people are into the adventure market where they want to go off road and take loads of gear with them.”

“The issue is that the industry is so fragmented at the moment. You could be building a couple a week or bringing them in from China and putting a fridge in it and call it Australian made. The industry needs to make sure that the companies that do a great job are supported.”

CEO of the Campervan and Motorhome Club of Australia, Richard Barwick said, “On behalf of CMCA, I would like to take this opportunity to congratulate Caravan World on 50 years of publication. To reach such a milestone is such an achievement, especially in this environment.”

“CMCA members now have the opportunity to access the online version of the magazine as a part of its membership which has been very well received. The RV industry has evolved so much over the years and now it encompasses more lifestyle opportunities than ever before.”

“A big congratulations to Emprise Group on producing such an informative, professional publication which gives a fantastic recognition of the lifestyle available to consumers.”

Stuart Lamont, Chief Executive Officer of the Caravan Industry Association of Australia said, “The continuation of Australia’s love affair with caravanning shows no sign of slowing. In today’s digitally connected world there is nothing better than escaping from the troubles of the world and reconnecting physically with family and loved ones through a caravanning and camping experience in the great outdoors.”

“A big driver of the current success of the industry is the specialised industry publications which provide information and inspiration to those looking to go caravanning and camping. The fact that Caravan World is now celebrating its 50th Anniversary is testament to the enduring nature of the industry, and the relevance that our consumers place on Caravan World. Well done, and we look forward to the next 50 years.” 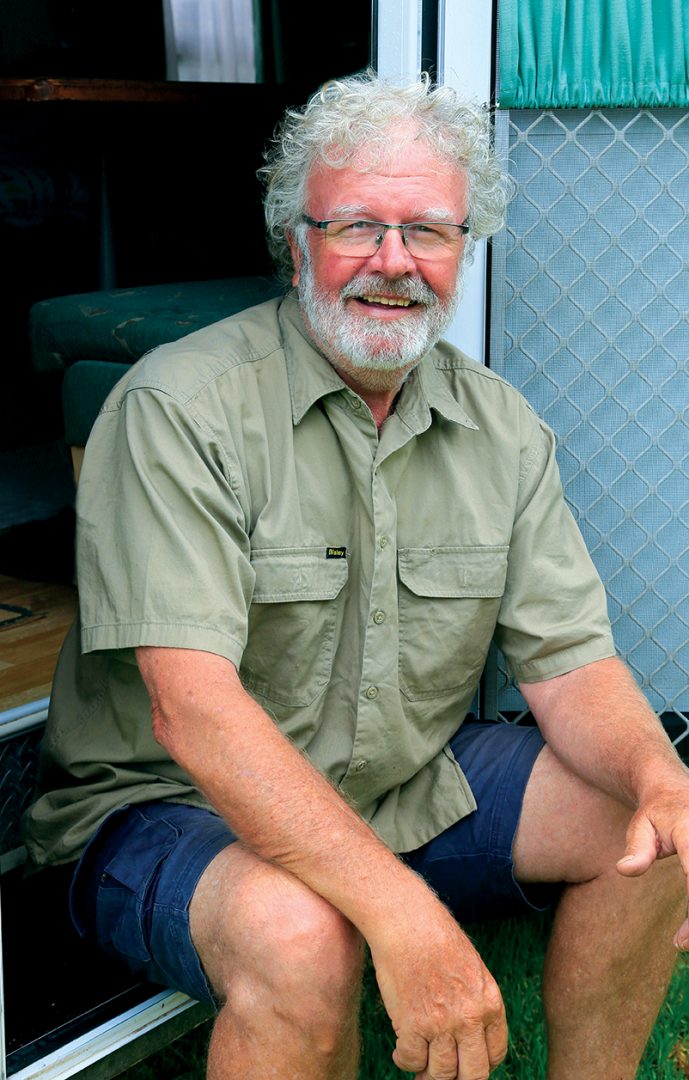 “Even though it’s a difficult time for both publishing and the caravan industry at present, heading up Caravan World during this anniversary year has been a real privilege,” said Caravan World Editor at Large John Ford.

“With overseas travel curtailed, caravanning is spearheading local travel in a way that we haven’t seen for decades. It’s important that our magazine continues to inform the new breed as well as long time owners with an authority backed by 50 years of know-how.”

Caravan World‘s 50th anniversary issue is on sale on the 3rd of September.

Rugby Australia boss Rob Clarke has hit back at accusations the code’s broadcast offering is a confused “show bag” of competitions as Nine refused to rule out bidding for the rights, reports SMH‘s Georgina Robinson.

With only a week to run before RA’s September 4 deadline for broadcast bids, Clarke retaliated against News Corp columnist Alan Jones‘s characterisation of the code’s proposal as “rubbish”, saying he had been encouraged by feedback from broadcasters.

“I’m more than happy for the rugby ‘show bag’ to be put to broadcast partners because, just like the Easter Show bags, it’s full of great goodies that people love and that’s what we’re putting in our show bag,” he said.

Clarke’s comments came as Nine chief executive Hugh Marks was cool about the free-to-air broadcaster’s appetite for rugby but did not rule out a tilt at the sport.

Foxtel and Optus are still considered the main contenders for the bulk of the sport’s 2021 offering, which includes a national club championship, a Super Rugby competition that will be a trans-Tasman or domestic affair, a Champions League-style ‘Super 8’ tournament to be played at the end of Super Rugby, Wallabies Tests and a State of Union series pitting Queensland against NSW.

Optus has made no public comment on its appetite for the game but industry sources suggested the telco had gone far enough down the road with Castle that it might be reluctant to throw away the work put into those negotiations. The code’s political stability and leadership will be under the microscope, as will the quality of its Super Rugby replacement and the ongoing impact of travel restrictions on Test fixtures next year.

Foxtel will still see rugby as key to stabilising its declining subscriber base but is under severe financial pressure and will be limited in what it can offer to pay.

Current free-to-air broadcast partner Ten is believed to be interested in renewing, and there are suggestions Seven could also be looking over the tender documents.

The game’s main challenge will be convincing potential partners of its value in an era where almost all networks are re-negotiating their rights deals at substantial discounts.