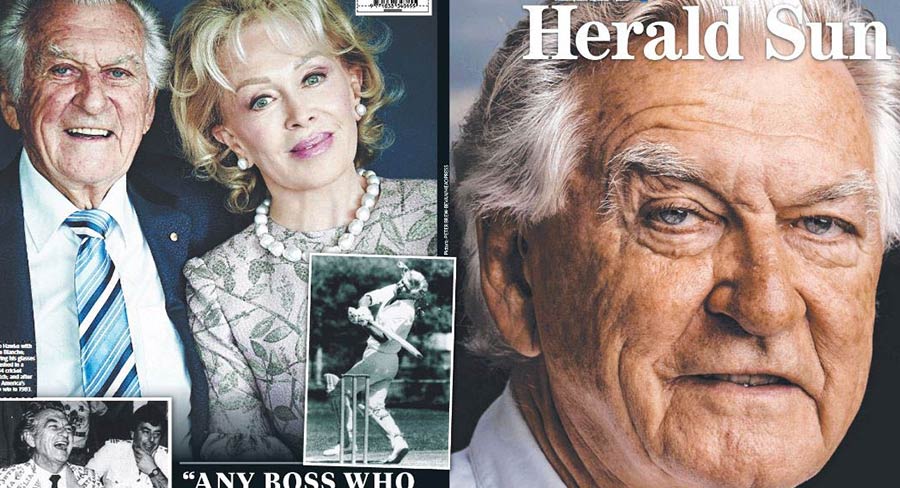 On election eve just one big story: The passing of Bob Hawke

Here are some of the front page tributes newspapers are paying to Australia’s 23rd Prime Minister, Robert James Lee Hawke 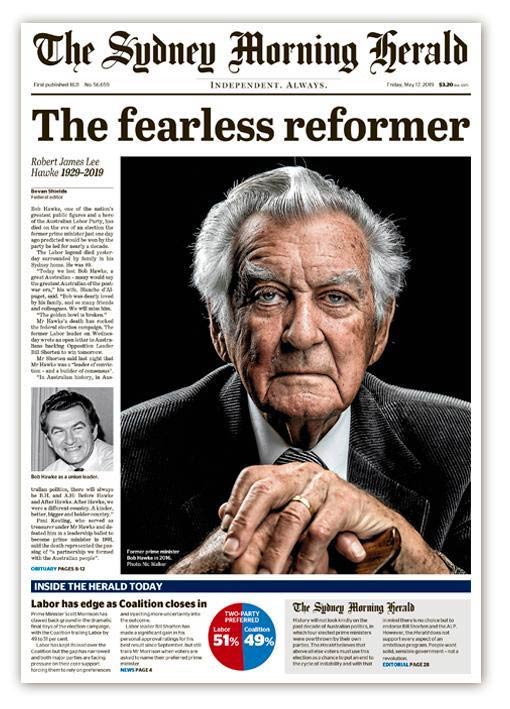 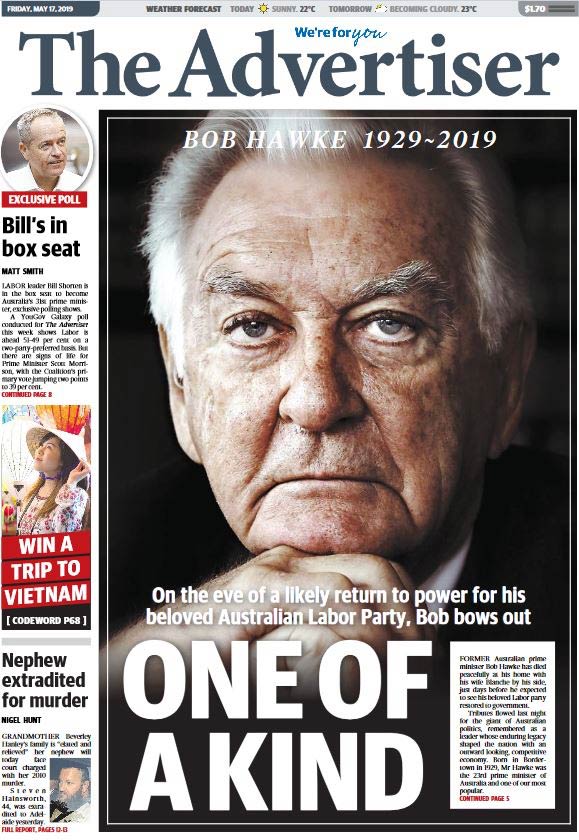 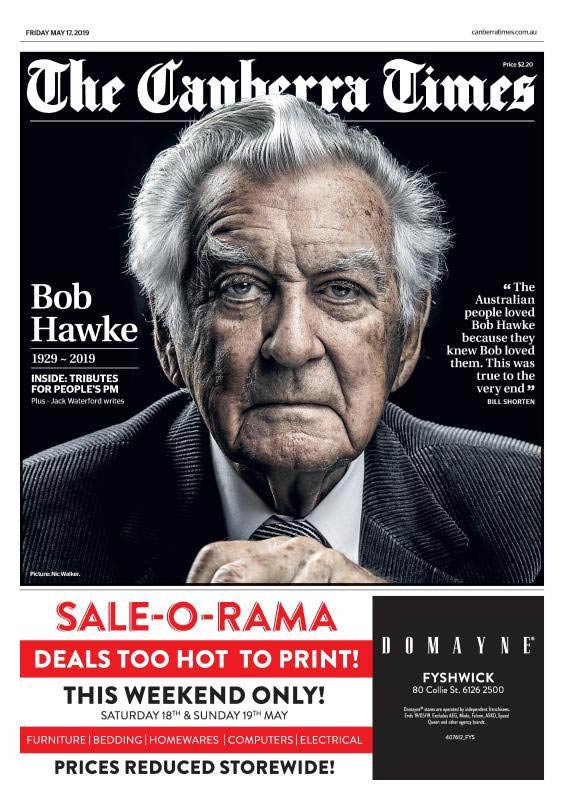 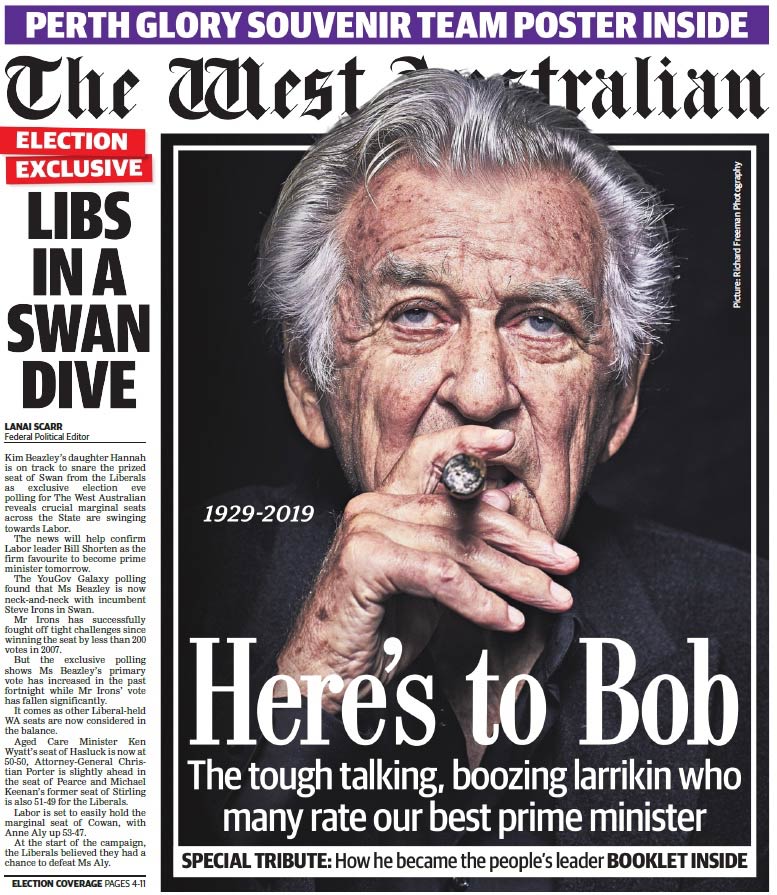 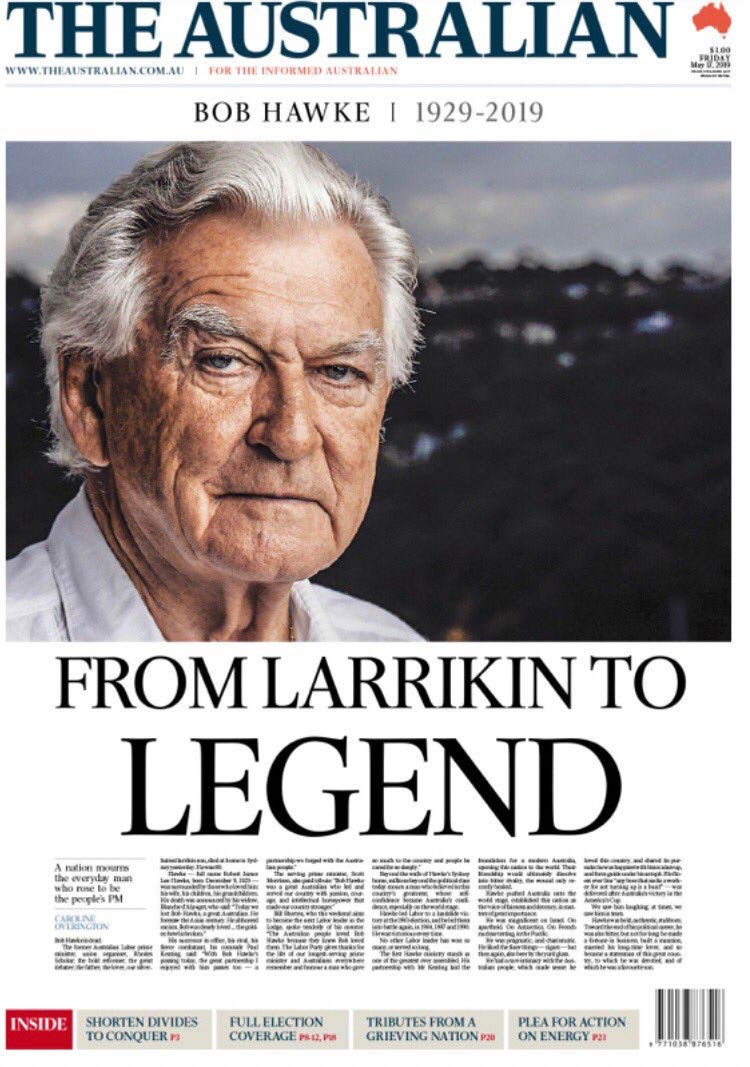 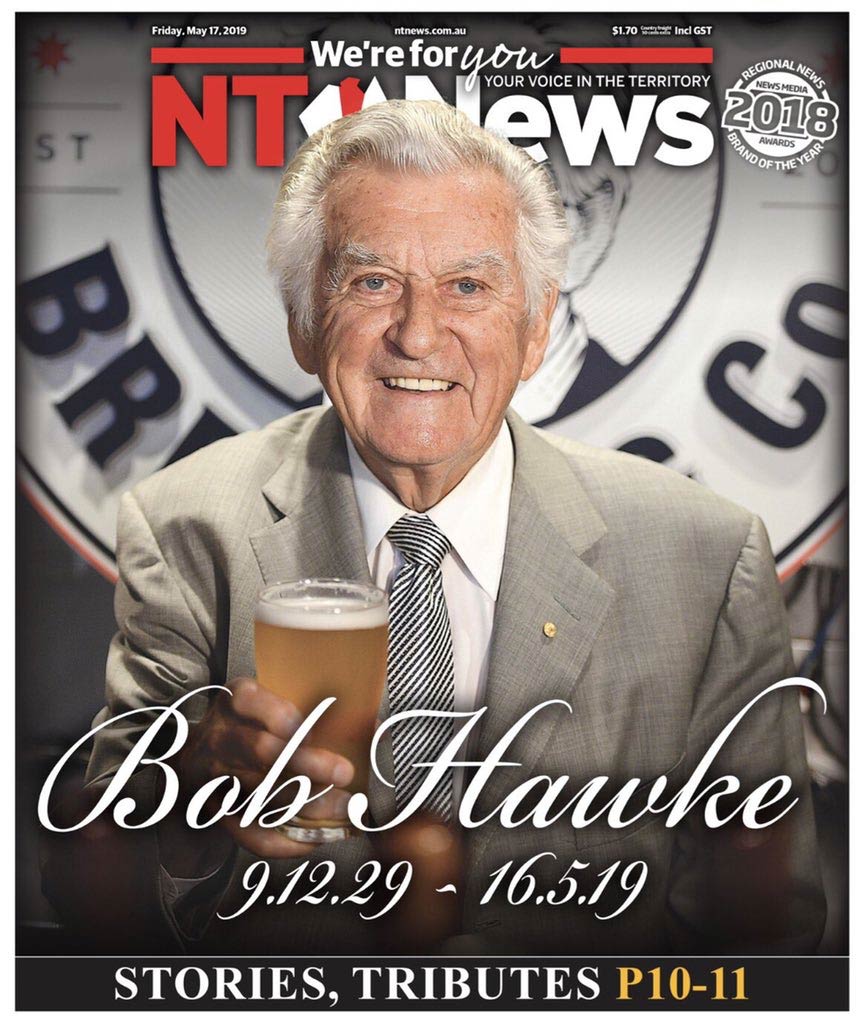 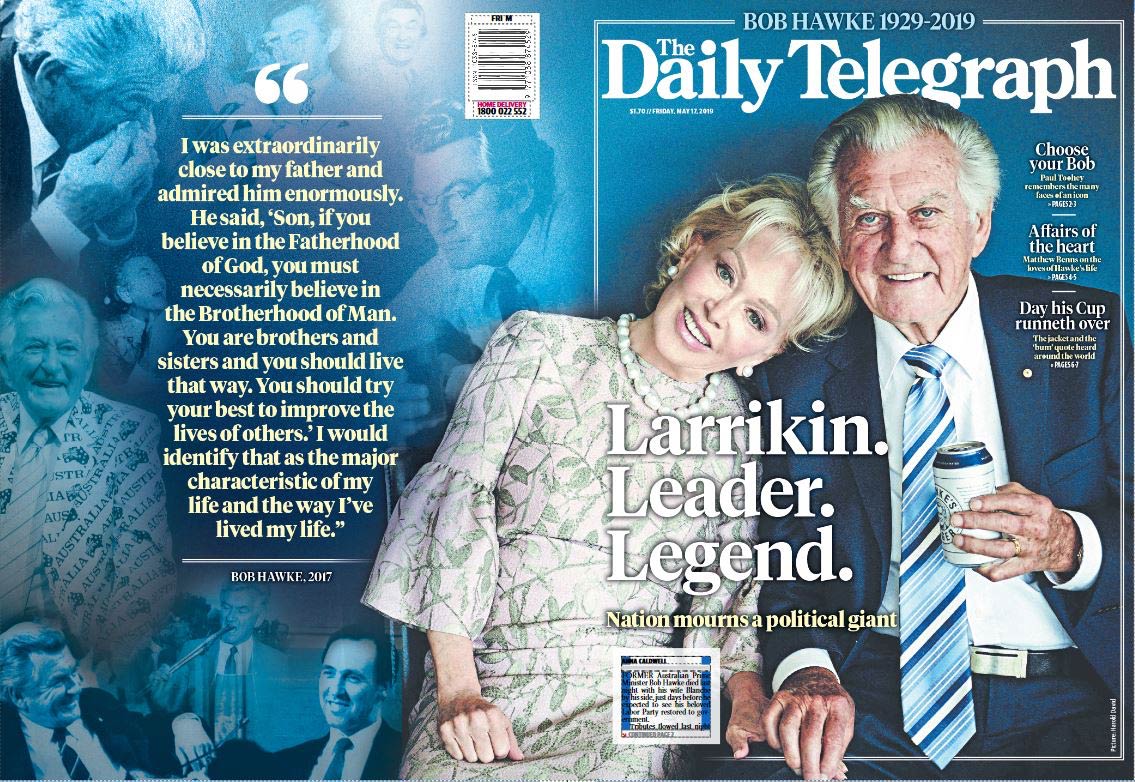 US President Donald Trump has signed a full pardon for former media mogul and one-time business partner Conrad Black, who was convicted in 2007 of fraud and obstruction of justice and spent three-and-a-half years in prison, the White House said, reports Reuters.

“Lord Black’s case has attracted broad support from many high-profile individuals who have vigorously vouched for his exceptional character,” the White House said in a statement announcing the pardon.

Lord Black has written books and columns expressing his conservative views. Last year, he wrote the book, Donald J Trump: A President Like No Other.

The guidance was first issued in February, along with its 2018 financial results, which wasn’t well received by investors and led to a share sell-off. At the time, chief executive Brendon Cook defended the guidance, saying the benefits from its $570m acquisition of outdoor advertising group Adshel would take time to flow through.

Cook will tell shareholders at its annual general meeting today that the guidance excludes “any integration costs incurred during 2019” and the impact from the compulsory change in accounting standards. It also takes into consideration the expected market softening in second quarter to the end of June.

Former general manager of marketing for APN Outdoor, Charlotte Valente, has been appointed GM for the B2B division of the Big Red Group (BRG).

Valente will head up Marketics, the exclusive distributor of Albert AI marketing technology in Australia and New Zealand, and the group’s workplace experiences product Redii from Monday May 20. 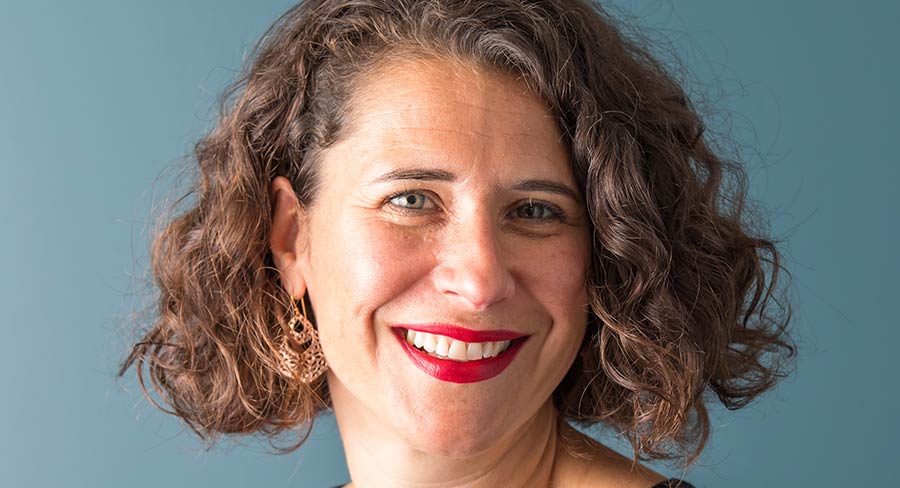 The Big Red Group is also the parent company to marketplace brands RedBalloon and Adrenaline (acquired in November 2018).

The group was formed in July 2017 by Naomi Simson and business partner and CEO David Anderson, and less than two years on is a $100m enterprise with eyes on further local and global growth and acquisition. 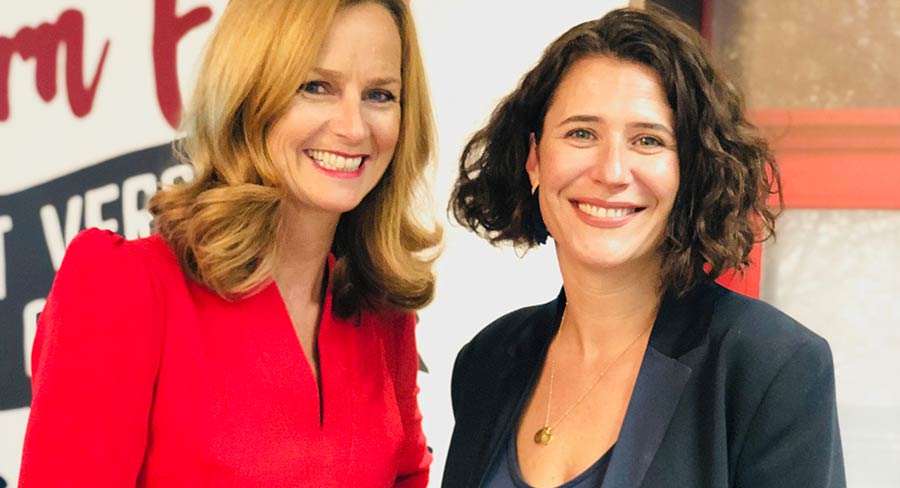 Valente has spent her career in media and BRG said she comes to the group with a strong data pedigree.

“I love getting under the skin of businesses and aligning solutions to their challenges, and that is exactly what this role is about. Ultimately what we’re selling at the Big Red Group is engagement – and engagement is the key to all growth,” Valente said.

“B2B brings with it a whole host of challenges and opportunities, and I am genuinely excited to lead the team as we deliver world-class marketing and employee engagement solutions to businesses across Australia and New Zealand.”

Big Red Group co-founder Naomi Simson (pictured with Valente) said the appointment of Valente was a nod to the enormous opportunity ahead for both AI marketing technology and the continued focus businesses are putting on their most valuable assets – people.

“I’m pleased to have a GM on board of the calibre of Charlotte to help deliver more meaningful programs to Australian businesses,” Simson said.

Rupert Murdoch has a couple of small quibbles with Ink, the British play about his rise as a media mogul, which he saw Tuesday night on Broadway, reports The New York Times.

Murdoch was at the Samuel J. Friedman Theatre with an entourage of past and present editors of The Sun, the British tabloid at the heart of the play. Other attendees included Rebekah Brooks, the chief executive of Murdoch’s News UK, who was embroiled in the infamous phone hacking scandal; David Dinsmore, another News UK executive; and Tony Gallagher, the editor-in-chief of The Sun. Also there was Col Allan, a former editor of The New York Post who was recently brought back to help run the paper.

A spokeswoman for the production said on Wednesday that a representative from News Corporation, Murdoch’s media company that publishes The New York Post and The Wall Street Journal, had reached out to Rupert Goold, the play’s director, to say they were buying tickets to the play and wanted to meet the cast.

After the show on Tuesday, Murdoch and the other editors met with many of the performers – including Bertie Carvel, the actor who plays him – onstage. Carvel was unavailable for comment on Wednesday, but in a statement he thanked Murdoch for being “generous with his time.”

The AFR: Australia’s next PM needs plan for growth. Luck not enough

Neither party’s plans will deliver the productivity overhaul that Australia needs, says an editorial in The Australian Financial Review. That must encompass tax, energy, education, industrial relations, and Australia’s place in the wider world.

Morrison barely has an agenda worthy of the challenge, but at least faces in mostly the right direction. Shorten has raised expectations that his economic plan, such as it is, cannot meet. Whichever side governs, the danger is that this will be exposed in another shock from the world economy when our choices will be less in our own hands.

The Daily Telegraph: Steady hand on the tiller beats rhetoric

The editorial in The Daily Telegraph advocates no change of Government:

Labor, having gone through the wrenching process of acknowledging the Coalition was right all along on border protection, now approaches tomorrow’s election without telling voters who will be the next Labor immigration and border protection minister.

Labor has no costings for potentially its most expensive policy and no name on the door of its most crucial minister.

Against that, the Coalition’s economic and border performances are both known and impressive.

Prime Minister Scott Morrison and his able and united team need to continue their work.

The Advertiser: Our state’s safest bet at key turning point

In an election campaign dominated by negativity and the leaders’ personalities, The Advertiser has chosen to focus strongly on policy settings. We pledged our coverage would be fair and ensure a contest of ideas. It has.

Today, we conclude that a re-elected Coalition Government is in South Australia’s best interests.

History will not look kindly on the past decade of Australian politics in which four elected prime ministers have been overthrown by their own parties, says The Sydney Morning Herald editorial.

The knifings of Kevin Rudd, Julia Gillard, Tony Abbott and Malcolm Turnbull have undermined faith in politics, damaged Australia’s international reputation and wasted time that should have been spent dealing with urgent problems such as climate change.

The Herald believes that above all else voters must use this election as a chance to put an end to that cycle of instability and with that in mind there is no choice but to endorse Bill Shorten and the ALP.

The Australian: Nation needs stability now, growth for the future

Politicians antagonise voters when they promise in poetry and govern in helter-skelter. Scott Morrison’s plan errs on the side of being safe but deliverable; his policies, consistent with traditional values, do not unduly raise expectations as Bill Shorten has done, says an editorial in The Australian.

The Coalition offers prudent fiscal consolidation and debt reduction, a mechanism to reduce tax and control spending, a plan to ease cost-of-living pressures on families, modest and costed emissions cuts in line with global deals, successful border protection and a disciplined approach to our foreign relations. This newspaper recommends a vote for the Coalition because it has a better, more practical and affordable plan than Labor to address the nation’s future challenges.

The Age: Shorten has made a compelling case for change

On the eve of the 2016 federal election, The Age advocated the return of the Turnbull government, says the newspaper in its editorial.

Opposition Leader Bill Shorten, while three years in the role and performing credibly, had not yet offered sufficient reason to justify the rare and economically disruptive dumping of a first-term administration. We believed the Coalition deserved more time.

Three years on, Shorten has presented, for the most part, an economically consistent and socially progressive reform agenda driven by a comprehensive review of taxation and spending priorities. This, combined with the Coalition’s infighting and lack of a comprehensive vision over the past six years, means that for Shorten and what appears to be a disciplined and united Labor Party, the time has finally come.

Bob Hawke on TV: From A Country Practice to Comedy Company

TV Tonight notes Bob Hawke was on once A Country Practice and it has a link to the clip.

Following the passing of former Prime Minister Bob Hawke, TV Tonight also has a flashback to when he appeared on A Country Practice circa 1986.

Hawke also appeared alongside Con the Fruiterer in The Comedy Company and played himself as a trade union leader on 1970s sitcom The Last of the Australians.

Richard Roxburgh starred as Hawke in the 10 telemovie.

Hell hath no fury like a Game of Thrones fan scorned – or Daenerys Targaryen, evidently – and now a quarter of a million of them are demanding the entire eighth season of the epic TV series be remade, reports The Sydney Morning Herald’s Genevieve Rota.

A change.org petition by fan Dylan D calls on cable network HBO to “Remake Game of Thrones season eight with competent writers”. At the time of writing, it had been signed by more than 500,000 people.

In the petition’s description, Dylan specifically criticises showrunners, creators and writers David Benioff and D.B. Weiss for the way they’ve developed the story beyond what was written in George R. R. Martin’s A Song of Ice and Fire books, which spawned the series.

“David Benioff and D.B. Weiss have proven themselves to be woefully incompetent writers when they have no source material (i.e. the books) to fall back on,” Dylan writes. “This series deserves a final season that makes sense. Subvert my expectations and make it happen, HBO!”