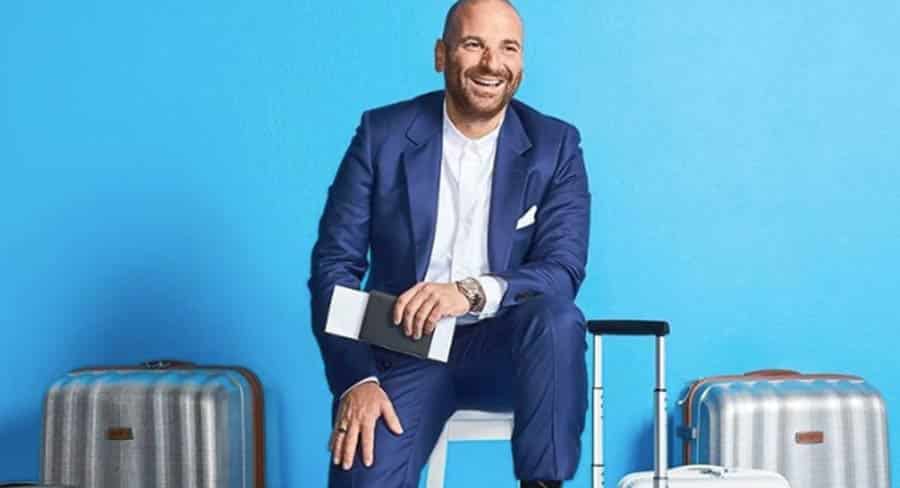 Tonagh left Foxtel in January last year ahead of the completion of its merger with Fox Sports.

Recently he has been running the Australian Visa Processing consortium, which is bidding to run Australia’s visa processing systems. He also headed an efficiency review of the ABC and SBS last year.

Tonagh joins the Village board as an independent non-executive director. He will serve on the audit, risk, remuneration, corporate governance and nomination committees.

Network 10 stands by Calombaris amid calls to axe MasterChef judge

Network 10 has declared its support for celebrity chef George Calombaris after unions demanded his dumping from MasterChef over the $7.8 million underpayment of 515 workers, reports The Australian’s Ewin Hannan.

“George and MAdE Establishment have reached an agreement with the Fair Work Ombudsman in relation to this matter,’’ a Network 10 spokeswoman said. “George has the support of Network 10. We will not be making any further comment.”

Calombaris’ restaurant empire backpaid $7.8 million in unpaid wages and superannuation to 515 workers and was fined $200,000 under a deal with the Fair Work Ombudsman.

ACTU president Michele O’Neil told The Australian that Calombaris should be removed from MasterChef.

“Channel 10 and the sponsors of the MasterChef program need to consider the damage to their brand caused by their continued support for a serial wage thief,” she said.

Under-fire MasterChef host and celebrity restaurateur George Calombaris has pleaded for Australians to understand he is not a wage thief, after his food empire had to fork out almost $8 million to underpaid workers, reports Jeff Whalley.

Speaking exclusively to the Herald Sun as the hefty bill was revealed, Calombaris rejected claims that years of underpayment were deliberate. He said he had tried to do the right thing at all times.

“I am deeply sorry for what has happened, and have apologised to our affected team members, past and present,” he said.

“There are two important things for Australians to know. The first is that when we discovered there were incorrect payments to members of the team, we self reported to the Fair Work Ombudsman and co-operated with their investigation,” he said.

“The second is that our team members, past and present, have been back-paid in full, and the vast majority repaid before October 2017 in consultation with Fair Work.”

Google has suspended controversial ticket reselling platform Viagogo from its paid-for search results, following persistent claims the platform continues to mislead consumers and is in contempt of court for not changing its practices, reports The AFR’s Max Mason.

Google’s decision came after the UK’s Competition and Market Authority announced it was taking Viagogo to court, alleging the ticketing website was in contempt of court earlier this month. The UK competition regulator has alleged Viagogo ignored warnings to comply with consumer law.

“When people use our platform for help in purchasing tickets, we want to make sure that they have an experience they can trust,” a Google spokeswoman said.

“This is why we have strict policies and take necessary action when we find an advertiser in breach.”

The Google spokeswoman confirmed the Viagogo suspension was worldwide.

In Australia, Viagogo also has been pursued by the Australian Competition and Consumer Commission for misleading and deceptive conduct.

When NBN Co issued a consultation paper for a review of its pricing last month it ignited a storm of controversy and criticism in the specialist telecommunications media. It appeared to be preparing the ground for a “Netflix tax”, comments The Age’s Stephen Bartholomeusz.

As it happens, that wasn’t its intention but even canvassing the possibility of differential pricing for video streaming made NBN Co the focus of a very sensitive and politically-charged debate about “net neutrality”.

That’s a conviction that internet service providers should treat all users and all communications equally, not using pricing or “bandwidth-shaping” to discriminate in favour or against particular customers or services.

The issue is a vexatious one. Data consumption of telecom networks keeps rising inexorably and rapidly. On the NBN it is doubling every few years, driven mainly by video streaming.

The letters warned both media organisations not to breach suppression orders as they launched a new documentary and book on the controversial story of Melbourne gangland Lawyer turned police informer Nicola Gobbo.

The story broken by Herald Sun journalists Anthony Dowsley and Patrick Carlyon is now the subject of a Royal Commission.

“Victoria Police notwithstanding it is a brilliant piece of broadcast journalism. We got a letter from Victoria Police today,” said Sky News CEO Paul Whittaker.

“I’ve had a few letters from Victoria Police over the years, in my previous incarnation as a newspaper editor…you can Google it, in 2009…and all I will say about that is this is an extraordinary story. It’s quite unbelievable how the wheel turns.”

Former Nine star Peter Stefanovic has opened up about the network’s dramatic “clearing of the decks” at the Today show in a candid new interview with Kyle and Jackie O, reports News Corp’s Nick Bond.

Dubbed the “troublemaking brother” of the Stefanovics by Kyle Sandilands, Peter copped quite the introduction:

“I still to this day think it’s terrible they wiped out the entire news team at the Today show … because of you,” the shock jock said.

“You must’ve copped some sh*t. Your brother went. Your wife went. You went. Fifteen years of your life …” Sandilands said.

“(Sports reporter) Timmy Gilbert too. Someone likened it to the Red Wedding from Game of Thrones, and it was probably pretty close to it,” said Peter, referencing that show’s most infamously violent scene.

It was the hottest ticket at this year’s Comic-Con. Literally.

The producers of Game of Thrones, David Benioff and Dan Weiss, were to be locked in a convention centre auditorium with 6500 of the show’s most rabid fans in the wake of incendiary criticism of the show’s final, controversial season, reports The Sydney Morning Herald’s Michael Idato.

Alas, it will never come to pass.

Comic-Con organisers have confirmed Benioff and Weiss, as well as director/co-producer Miguel Sapochnik, will not appear as scheduled at the world’s biggest film, television and comic book convention after all.

The Game of Thrones panel will still be held in Comic-Con’s largest venue, Hall H, and is scheduled for Saturday, Australian time.

In many respects, the cancellation of the show’s two producers is unsurprising; the final episodes of the series were widely criticised online, and a fan petition calling on HBO to remake the final season with “competent writers” has drawn 1.68 million signatures.

AFL greats say they wish the sport had done more to stand up for booed Swans legend Adam Goodes, as a documentary on the final years of his football career was broadcast for the first time, reports The Age’s Rachel Eddie.

The Final Quarter aired on Channel 10 on Thursday, and was met on social media with admiration for the two-time Brownlow medallist, and shame for the way he was treated before his retirement from AFL in 2015. 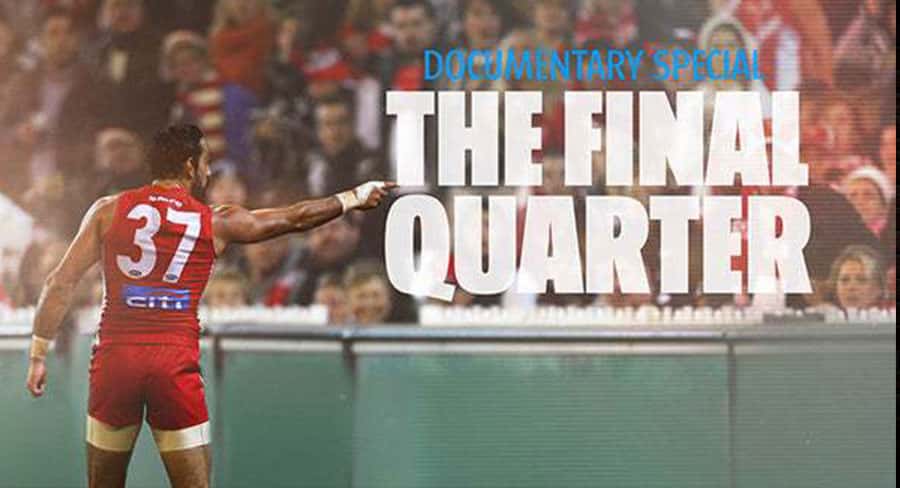 After the film, made up solely of archival footage and directed by Ian Darling, players spoke out to say the AFL did not do enough to stand against racism at the time.

“The overarching sort of feelings and emotions during that film was just the immense sadness, but then just the extreme anger,” Bolton said in a The Project special hosted by Waleed Aly after the documentary.

Another film on Goodes, The Australian Dream, from Stan Grant, will air at the Melbourne International Film Festival next month.

In that documentary, Goodes revisits the incident some believe sparked the campaign against him, when he called out a 13-year-old Collingwood fan after she labelled him an “ape” during the 2013 Indigenous round.

With the courage that was his trademark as a captain and batsman, Ian Chappell is staring down a more deadly foe – cancer, reports News Corp’s Ben Horne.

The Test cricket legend has just completed five weeks of intense radiation therapy after he had skin cancers removed from his shoulder, neck and underarm.

Chappell, 75, will meet with specialists for a full report on Monday, but at this stage the pathology has come back all clear and the commentary icon is putting his hand up to be part of Nine’s Ashes coverage next month.

A lifetime of summers in the sun has taken its toll, and the master pragmatist says he’s confronted his own mortality and has his head around the road ahead — whatever that might hold.

Melbourne will host the Australian Grand Prix until at least 2025 after the race owners inked a contract extension with the Andrews Government, reports News Corp’s Matt Johnston.

Formula 1 chairman and chief executive Chase Carey said the two-year deal was based on the event being a resounding success in Victoria, adding that organisers “plan to make the Australian Grand Prix even more exciting and spectacular” as it continues to grow.

The new deal paves the way for a 30th anniversary celebration at the iconic Albert Park track, and also fends off a bold bid by NSW to snatch the international event.

Carey said “we cannot wait to be back in Melbourne”.

“The decision to extend the current relationship for a further two years stems from the fact this event has proved to be a resounding success for the capital of Victoria, for Australia and indeed around the world, proving immensely popular with fans and those who work in Formula 1,” he said.