Mining magnate Andrew Forrest is urging the Morrison government to treat Facebook and other technology companies as publishers and make them more accountable for fraudulent advertising on their platforms, reports The AFR’s Max Mason.

Fortescue Metals founder and chairman has recently been used to facilitate cryptocurrency scams.

“I’m saying they must be regulated like a normal publisher. They’re no different to the Fin Review, a television station or a radio station. They are responsible for the truth; well, so should these huge publishing houses (be),” Forrest told The Australian Financial Review.

“This is the absolute wild west where there’s no sheriff in control and I’m saying to governments across the world ‘stop falling for the biggest scam of all; that they’re just a billboard’.”

A Facebook spokeswoman said the social media giant was investing in a scaled technology to prevent these types of scams.

“We now have more than 35,000 people working on safety and security, and our security budget today is greater than the entire revenue of our company at the time of our IPO,” she said.

It’s not the first time News Corp has been rated harshly, this time a stock recommendation from a US analyst:

News Corp is a dying legacy media organisation that in my opinion has no real potential to create an additional shareholder value in the long run, comments Aleksey Razdolgin, CEO of the proprietary trading firm Arbitrage Trades and a financial blogger at Seeking Alpha.

The rise of disruptors such as Google and Facebook pushed News Corp to the edge, as the company doesn’t have as much leverage with advertisers as it had two decades ago when Rupert Murdoch was fully in charge of his company. Ruthless competitive environment, negative profit margins and declining revenues are the main reasons why I believe that News Corp stock should be avoided.

At the beginning of November, News Corp reported Q1 earnings results that disappointed a lot of investors, as revenues for the three months’ period were down 7.1% year-over-year to US$2.34 billion. In addition, the company lost money, as its net loss in Q1 was $211 million. A year ago, News Corp made $128 million in net income for the same time period. What’s even worse is the fact that the company’s current profit margin is negative, which means that its costs outweigh the profit.

To improve the current situation, News Corp recently signed a partnership agreement with Apple to include its UK and Australian newspapers in the Apple News+ app. The management of News Corp also plans to optimise the company’s overall portfolio and is looking for a possible sale of some of its assets.

However, I don’t see any real long-term solution to the current problem.

Beecher told staff at a lengthy meeting this week that Inq, a new investigative outlet launched by the Crikey publisher this year, had failed to hit its targets. But in a subsequent interview with The SMH he said he had a long history of trying new models for journalism and was not backing away from the project.

“We always knew that we were in an exploratory period and we have to iterate and test and learn,” Beecher said.”We are still incredibly committed to Inq and our journalism not just at Crikey but across the business.”

Clive James, an expatriate Australian writer and broadcaster who wrote incisively and often hilariously about television, literature and current affairs, has died aged 80, his agents said on Wednesday, reports Reuters.

James, a big name in British television and radio in the 1980s, was influential in media circles and won awards for journalism and broadcasting.

His often coarse, dead-pan style peaked in popularity in the 1980s with the show “Clive James on Television”, in which he lampooned clips of absurd international television shows, in particular a Japanese contest called “Endurance”.

He wrote a newspaper column titled “Reports of My Death” in The Guardian after being diagnosed with leukemia in 2010. In 2016 he said his longevity after announcing his illness was “embarrassing”.

James acted as informal adviser to Britain’s Prince Charles and his ex-wife Diana, something he wrote about in a searingly honest portrayal of their friendship and the phenomenon of Diana’s popularity after her death in a car crash in Paris in 1997.

Vivian Leopold James was born in Sydney in 1939, changing his name to Clive as a child. He moved to England in 1962 and, after graduating from Cambridge University, remained there for the rest of his life.

Michael Mucci, a beloved member of The Sydney Morning Herald more than three decades has died at the age of 57 after a battle with brain cancer, reports the paper’s Matt Bungard.

The talented illustrator worked in the art department at The Australian Financial Review and The Sydney Morning Herald for 31 years before leaving in 2015.

“Michael’s engaging, thought-provoking illustrations were a much-loved addition to the Herald’s journalism over 30 years. His large Herald family will miss him,” editor Lisa Davies said on Wednesday.

Tributes from former colleagues immediately began pouring in. “So talented, way too soon, such a lovely guy,” one said.

He was the 2006 winner of the Archibald’s Packing Room prize, for his portrait of builder and television personality Scott Cam, entering the competition more than a dozen times.

Mucci was born in Italy in 1962, and moved to Australia as a child. He was a finalist in the 1989 Blake Religious Art Prize and the 1994 Doug Moran Portrait Prize.

Away from the world of media, Mucci taught graphic design, illustration and sculpture at the University of Wollongong.

Sources with knowledge of the sales discussions at the radio network said there had been a campaign planned to run in September, which was delayed until October and then pushed back again until November. It has since been cancelled altogether.

A spokesman for Subaru Australia said the business did not advertise on the 2GB show or on the network, repeating a statement made in August when Jones initially made the controversial comments.

“We do not comment on commercial in confidence issues, including broadcaster and publisher negotiations,” the spokesman said.

The longest-running is Sydney Weekender hosted by Mike Whitney at some 25 years.

Queensland Weekender and The Great Day Out also have 19 seasons and Creek to Coast ends at 10 seasons. 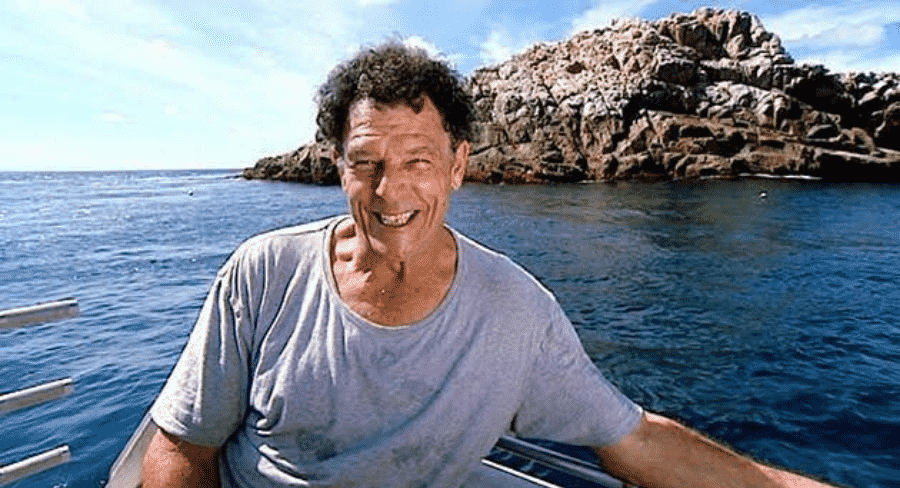 Seven chief executive officer James Warburton said: “The programs that are not continuing have all made a valuable contribution to Seven, particularly Sydney Weekender which has been a Sydney weekend institution for 25 years.

“However, we will continue to make decisions that support our content-led growth strategy and focus resources where they will make the most impact.”

Tim Minchin and Chris Taylor have just collaborated on Upright, an eight-part Foxtel show in which Minchin plays Lucky, a desperate man making the long trip from east to west across the Nullarbor to see his dying mother. The catch? He’s towing an upright piano and has a mouthy 16-year-old runaway, Meg (Milly Alcock), in the passenger seat, reports The Sydney Morning Herald’s Louise Rugendyke.

It’s a road-trip comedy with a heart as big as the desert it crosses – flashing between drama, thriller, heartbreak, comedy and the downright delightful as the odd couple navigate each other and the demons driving them towards and away from family.

The show marks Minchin’s first major starring role on Australian TV – he was part of the ensemble cast of another vehicle-based comedy, Squinters, in 2018 and played the murderous Smasher in 2015’s The Secret River– while for Taylor, who came up with the concept and is one of the writers and producers, it’s a dramatic change from the satire he is most well-known for as a member of the Chaser.

The idea came to Taylor in 2016 , when he was at Los Angeles International Airport with bad Wi-Fi. Scrolling through news stories on his phone, he started reading about a man who was travelling across the US with nothing but an upright piano for company.

The pair first met when Taylor was co-hosting the Triple J drive show in 2004 and Minchin was a musical guest. Taylor remembers being a “bit overawed” because “Tim was the first person, and this was before you were really big, and you just knew what you wanted. You had very set ideas, particularly about the sound and all of that, and that impressed me a lot.”

But it wasn’t until Taylor began throwing ideas around for Upright with Lingo Pictures’ Jason Stephens, that Minchin came to mind again.

There’s something about Kiwis. Whether it’s the accent, the natural friendliness, or the calm, phlegmatic response to basically any situation no matter how disturbing, Kiwis seem born to make us laugh, writes The Age’s Ben Pobjie.

Anyone who’s ever watched the strangely addictive cops-on-the-beat documentary series Police Ten 7 knows the kind of comedy gold that flows from the average New Zealander. But Police Ten 7 is, ostensibly, only an accidental comedy: press the humble Kiwi copper into service in a deliberate one, and the laughs become supercharged. That’s where Wellington Paranormal comes in.

WP is a spin-off of the masterful vampire mockumentary What We Do In The Shadows, which was the brainchild of Flight of the Conchords’ Jemaine Clement and director Taika Waititi, whose spectacularly oddball talents have since been embraced by Hollywood (Thor: Ragnarokamong others). That movie featured, in a couple of memorable scenes, a pair of utterly oblivious Wellington police officers, whose investigations into the private lives of vampires led to the discovery of nothing more sinister than an absence of smoke detectors. Clement and Waititi saw the potential in this dedicated but clueless pair, and Wellington Paranormalwas born.

The ABC is standing behind its decision to axe its long-running Olympics radio coverage after crunch talks with the Australian Olympic Committee’s president and boss, citing budget pressures despite widespread outrage from sporting bodies, reports The Australian’s Lilly Vitorovich.

However, following the crisis meeting the ABC maintained it would not broadcast next year’s Tokyo Olympics.

Matildas and Socceroos ranked high for emotional pull on fans

It’s the double-edged sword for football in Australia – the emotional links that explain why the Matildas are our favourite team, but the A-League clubs are struggling for fan engagement, reports News Corp’s Tom Smithies.

The Matildas and the Socceroos are the most popular and third-most popular national teams according to new research which explores the emotional connection between fans and a host of sports teams at club and national level.

The second most connected national team is the Australian Women’s Rugby 7s team and fourth is their full-sided equivalent, the Wallaroos.

The Wallabies are sixth, while the men’s cricket team is seventh – up from bottom of 13 national teams a year ago in the wake of the sandpaper scandal.

In rugby league, meanwhile, this year’s State of Origin win has helped the NSW team to climb one place above Queensland.