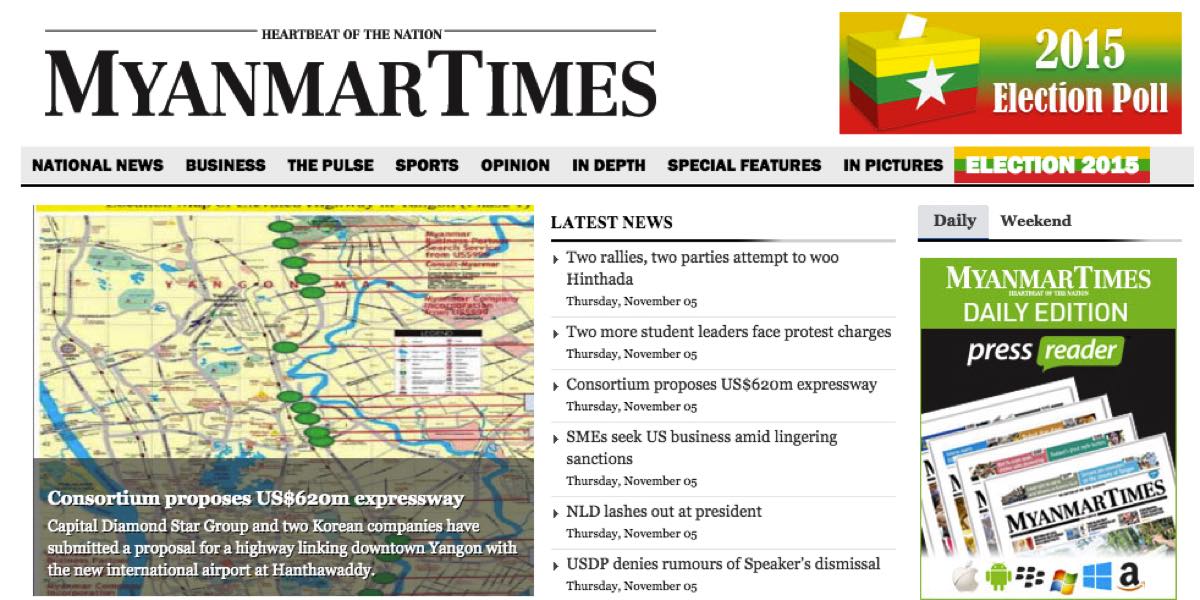 
The hunt is openly on for a new CEO for the Myanmar Times to replace former UK banker Tony Child who was installed on 1 October last year when co-founder and 30% owner Ross Dunkley was deposed and removed from office as managing director.

Thai resident David Armstrong, a former editor-in-chief of The Australian and editor of both the Canberra Times and The Bulletin, is a consultant in the search for a new CEO and several candidates were recently interviewed in Bangkok.

Tipped as a lead contender is Paul Myers, who in the mid-1990s launched Outback Magazine, followed by a three-year stint as publisher of The Bulletin. He is now based in Bangkok where he manages and part-owns Asian Travel Media, billed as, “The only dedicated golf tourism PR/media company in Asia/Pacific”.

Dunkley recently sold his share of the Myanmar Times to majority owner, Yangon businessman Thein Tun, for a rumoured $2 million.

Thailand’s financially struggling digital TV operator Thai TV Co took the preemptive move this week of going off air ahead of the regulator’s deadline for the payment of unpaid auction fees of about 1.6 billion baht.

Thai TV simply wanted to return its two licensees but was ordered by the NBTC to pay an auction fee that was originally due in late May. Other fees were also mounting.

This week the company abruptly pulled the plug on its two terrestrial-based digital TV stations, Thai TV and MVTV Family.

The company also sent letters to the Thai Public Broadcasting Service demanding the cancellation of its lease of Thai PBS’s digital-transmission network.

The company said it halted broadcasting because of its failure to find new partners prepared to share the hefty auction fee. It also noted that it could not finalise a partnership deal with Chalermchai Mahagitsiri, heir to the Thai Nescafe coffee empire.

Springnews TV last week became another victim of Thailand’s over supply of 24 digital TV channels. The company announced that it would cut 40 staff, mainly cameramen and their assistants and reporters

Watanya Wongopasi, vice chairwoman for business management of Springnews Corporation, told The Nation that she did not regard the staff cuts as significant as the company still had 400 employees.

But she did acknowledge that oversupply remained the big challenge for the industry.

She added that her company had set a new business direction to become a multiplatform provider. She told The Nation, “We had to cut some costs as well as jobs that are not related to our key direction. In the near future, we will recruit new staff for our new businesses like radio, and other new media business.”

Bangkok’s Line TV has formed partnerships with content providers such as GMM Tai Hub, GMM Channel, The One Enterprise (One channel), MCOT’s NineEntertain and Woody World.

Those content producers will rerun their TV programs via Line TV immediately after the shows are telecast on free-TV channels.

The programs range from TV series and entertainment news to variety shows.

Ariya Banomyong, managing director of Line Thailand told The Nation that after launching the video-on-demand service via the Line TV application last year, the company had been witnessing strong growth in viewers. In the third quarter, the number of Line TV viewers surged by 118% from the previous quarter and he added that video consumption is still on the rise in Thailand.

An Indonesian court Tuesday gave short jail terms to two British journalists for trying to make a documentary without the correct visas, instead using only tourist visas.

But Neil Bonner, 32, and Rebecca Prosser, 31, were able to walk free after the verdict due to time spent in custody awaiting trial – they had been detained since May.

The duo arrived in Indonesia to make a documentary about piracy for production house Wall to Wall with funding from National Geographic.

Foreign journalists wanting to report in Indonesia must get a special visa.

The BBC continues to increase its presence in Japan, with a new website featuring translated stories and video from BBC.com.

The BBC said the new website is commercially funded and not paid for in any way by the UK TV licence fee. If the site is fully ad funded as hoped, it will be the first time the BBC has used that commercial model for a non-English website.

Singapore’s Heart Media has acquired Luxuo.com which will enable Heart to “capture and engage more affluent readers and luxury brands with this move”.

Heart Media’s CEO and publisher, Olivier Burlot, said, “The acquisition of Luxuo provides us with a strong foothold in the online luxury vertical space.”

The remaining 23.9% stake will be acquired in a call option deal also for 500 billion won in three years’ time.

The planned entry of Netflix next year helped prompt the move.

• Thailand’s out-of-home media ad spend is estimated to see zero growth again in 2016, after expected flat growth to Bt9.75 billion (AU$384m) this year, mainly due to ongoing weak consumption and the slow economy, according to Kinetic Worldwide (Thailand) .

• Malaysians will get free digital television broadcast next year through the Digital Terrestrial Television Broadcasting service, to be managed by MYTV Broadcasting. Two million sets of decoders will distributed free to eligible households.

• A Los Angeles-based research institute founded by Oscar-winning actress Geena Davis has published a report about gender diversity in films which shows that China featured the highest number of gender- balanced movies, followed by Korea, Britain, Brazil and Germany.

• Former Supreme Court chief justice Bagir Manan, now the Chairman of Indonesia’s Press Council, has criticised National Police for ordering a crackdown on hate speech, saying it could be used to curb democracy and freedom of speech. He noted that similar laws during Dutch rule led to the closure of local press associations believed to be “spreading hatred” of the colonial government.