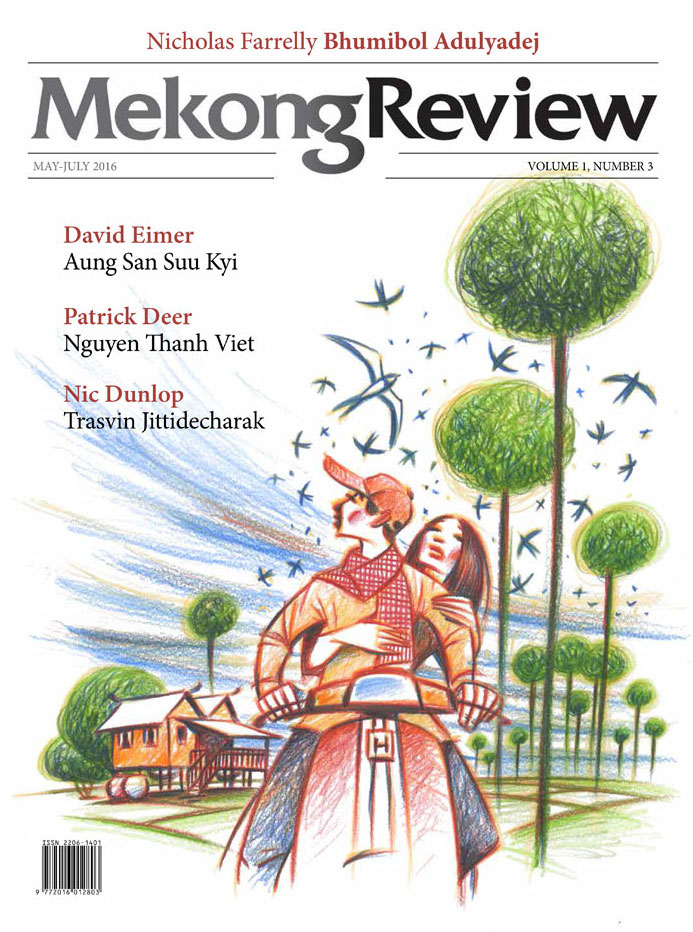 The publication was launched in Cambodia in November last year when Jones was living there. He returned with his family to Sydney in January and oversees the publication from there.

The publishing team – associate editor, designer and sales manager – is in Phnom Penh as is the printer.

Monument Books distributes it in Cambodia and Laos and, from the next edition, Myanmar as well.

Friends of the publication also distribute it to cafes in Ho Chi Minh City, Hanoi and Yangon.

From the August issue, Mekong Review will be sold in Bangkok through Riverbooks. Jones said, “We are also in discussion with a bookshop in Hong Kong and Singapore, so slowly, in somewhat unorthodox ways, we are getting around.”

Both silver and one bronze awards were given to Channel 5, and Channel 8 also won a bronze.

This year the PromaxBDA awards had the largest participation from more than 280 networks and TV stations around the world and a record 6,000 entries.

MediaCorp’s Singapore newspaper Today also won a Society of Publishers in Asia (SOPA) award for Excellence in Information Graphics. The paper is sub-edited under contract by Australia’s Pagemasters.

South Korea’s digital signage market will create 10.1 trillion won (A$11.7 billion) worth of production and create 3.2 trillion won in added value by 2020, according to the Korea Economic Research Institute.

The Institute noted that transit shelter ads fitted with digital have been getting a lot of attention in the ad market, and recommended that the Korean government relax regulations on the smart ad sector using digital signage.

Singapore’s MediaCorp this year celebrates 80 years in radio and the latest Nielsen Radio Diary Survey conducted between March and May 2016 adds lustre to its celebration with its radio stations claiming eight of the top 10 spots.

Mediacorp’s three Chinese stations continue to be the top three most-listened-to stations with Love 97.2FM holding the number one position for the third survey in a row with a listenership of 19.4%. Yes933 was second with listenership of 18.5% and Capital 95.8FM third with 17.3% listenership.

Singapore’s number one English radio station Class 95 was fourth in the survey.

Catcha Group’s TV streaming business, iflix, is planning to expand into the frontier markets in Africa and the Middle East, according to a report in The Australian.

But in March iflix ventured out of its Southeast Asian territory and launched in Pakistan.

CEO Mark Britt told The Australian, “For us, Nigeria, Ghana, Iran, Morocco are just as interesting from a business model point of view as Korea or Singapore.”

Founded in 2013, VS Media “is experiencing explosive growth in the mobile world”, according to Li Ruigang, chairman of CMC Capital.

For years the Myanmar government made mobile phones so expensive they were inaccessible to the general public.  For example, six years ago a sim card in Myanmar cost as much as $1,500, but after 2011 a sim card could be bought for about $1.50.

Korea’s ad market is the sixth largest among member nations of the OECD, according to a report by the Korea Advertisers Association and Media Audit Korea.

Total advertising spending was 13.8 trillion won last year, only less than what is spent in the US, Japan, Germany, Britain and France.

Digital media’s growth was noticeable but TV still took the lion’s share of the market. Korea has 378 TV channels, higher than Germany’s 373 and Japan’s 211.

The Korea Cable TV Association called on the government to finalise its decision over the controversial takeover of South Korea’s largest cable television company CJ HelloVision by SK Telecom, to end market uncertainties in the industry.

The Association said, “The cable TV industry faces market uncertainties due to the delayed decision, which could cause a backlash from the broadcasting sector as well.”

Opponents of the merger say it may speed up the decline of the cable TV industry.

•  By 2021, smartphone subscriptions in Vietnam will triple from around 30 million in 2015, according to Ericsson’s Mobility Report. Myanmar, Indonesia, Bangladesh and the Philippines will also lead Southeast Asian growth in mobile broadband subscriptions.

•  The Philippine Long Distance Telephone Company said it is open to raising its investment in iflix to support the expansion of internet TV service company. “Well, we’re always open to it,” PLDT chairman and president Manuel Pangilinan told reporters in Manila when asked if the company was willing to increase its investment in iflix. Fresh funds already raised by iflix will be used to accelerate growth in Malaysia, Thailand and the Philippines and for expansion into new markets.

•  Bursa Malaysia Securities has queried digital out-of-home transit TV company Asia Media Group over the sharp rise in price and volume of the company’s shares recently. It directed the company to find out the reasons for the unusual market activity.

•  China Daily reports that China has officially announced plans to strengthen regulations on imports of overseas content starting 1 July. All television stations have to cancel shows based on foreign formats if they do not meet the proposed standards set by the government. Networks that wish to air licensed foreign programs must earn approval of both state governments and the media regulator two months prior to broadcast.

•  World wrestling’s WWE has signed a multiyear content distribution agreement with China’s PPTV to stream on demand its flagship shows, the three-hour Raw and two-hour SmackDown, in Mandarin starting 28 June. The deal will include a live show in Shanghai on 10 September and the emergence of Bin Wangas the first Chinese wrestler signed to a developmental contract.