Aussie social media maven Nicole Warne was in Singapore on Wednesday to celebrate the launching of Harper’s Bazaar Singapore’s June issue which focuses on social media and features her as cover girl. She engaged in an “intimate dialogue session” with HB editor-in-chief Kenneth Goh and was the special guest at the opening party of the HB’s Asia NewGen Fashion Awards 2016 Exhibition. 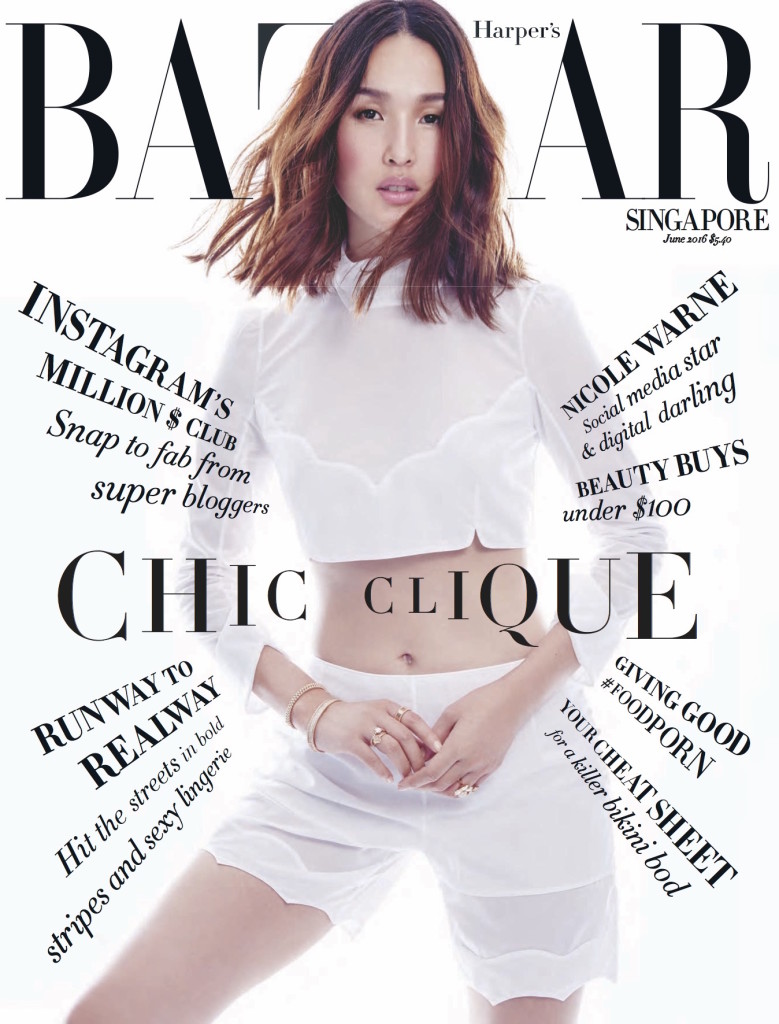 Warne was chosen to grace the cover because her “impeccable style and strong business acumen has grown Gary Pepper from a small online store, to an internationally renowned fashion, beauty, travel and lifestyle website.”

Warne set up an eBay store called Gary Pepper Vintage seven years ago at age 20. She scoured op shops and garage sales near her home on the NSW Central Coast to find items to sell online. Gary Pepper is now a global fashion and lifestyle brand.

The June cover and spread was styled by senior fashion editor Windy Aulia, and shot by renowned photographer Yu Tsai.

The countries include Hong Kong, the Philippines, Singapore, Indonesia, Malaysia and Thailand.

Singapore-based Asia Media Exchange co-founder and chief executive officer Basil Chua told Thai newspaper The Nation that the company, which already operates in Thailand providing cross-media advertising management, plans to operate throughout the region to capitalise on the continuing popularity of TV advertising whether terrestrial, digital, online streamed or whatever.

“We aim to be the ‘Alibaba’ in the regional advertising industry that provides a programmatic TV advertising exchange for advertisers, TV networks and online publishers,” he said, adding that the “ecosystem” of the Thai TV business was ready for a new method of ad trading.  He said the launch of digital TV in Thailand two years ago was a game-changer.  In Thailand AsiaMX has already worked with BEC-Tero Entertainment and Nation Broadcasting Corporation, the operator of Nation TV, Asia Satellite TV and Dek-D Interactive.

Singapore Press Holdings claims a first in Southeast Asia with the launch of SPH Variable Print which it says will “ take personalised marketing to a whole new level.”

SPH says the cutting-edge technology allows changeable information on the same ad without the need to change plate or stop presses.

Elsie Chua, executive vice-president, head of SPH Marketing Division, said, ” Brand owners can now communicate different messages and promotions to consumers on the same day.”
An in-paper Variable Print promotion kicked off last Saturday and Sunday and will continue this weekend with Carlsberg the official sponsor of UEFA EURO 2016 advertising in The New Paper.

Over last weekend and this weekend, the promotional ad  features four teams, each made up 10 players from England, France, Germany and Spain.

Media Prima Television Network’s initiatives in home shopping and video on demand services are expected to generate such streams.

The revamped “tonton”, Malaysia’s #1 video streaming portal with over 5.6 million registered users, and the redirection of 8TV’s entire urban content into Studio8, accessible exclusively online via YouTube, are expected to solidify MPTN’s dominant position amongst the free-to-air local television channels.

The recently launched Kool FM allows Media Prima Radio Networks to expand into the mature Malay radio segment. The network has a large social media presence with over 6.2 million users on digital applications for its four radio stations.

The Group also offers news and content through its digital interactive magazines ZIP, Tech Kingdom, Speed and Wheels and Premium BH Plus.

The company’s digital TV Channel 8 accounted for 45% of total revenue, with 35% from music, events and others, and the remainder from satellite TV and radio.

But overall advertising spending in the quarter shrank 8.6% due to the economic downturn, but the company tips the economy will improve this quarter.

The company said that of the 4.5 billion baht expected in revenue this year, 65% will come from TV and media, which includes Channel 8 – which now has 300,000 viewers per minute – and two satellite channels, Sabaidee TV and Channel 2, as well as radio station FM 93 Cool Fahrenheit. The remaining 35% will come from music, entertainment and events.

Tencent-affiliated China Music Corp, which backs Chinese online music services Kugou and Kuwo, hopes to conduct a NASDAQ IPO in the US before year’s end. It’s estimated that the IPO will raise between US$300 (A$408 million) and US$600 million.

This comes as Beijing enforces censorship on music services and seeks to control online music piracy.

In January CMC entered a syndication deal with QQ Music, Tencent’s music streaming service, which permits its companies the rights to more than one billion songs exclusively distributed by QQ Music within China.

Singapore Exchange Catalist-listed mm2 Asia, a film and TV content producer, has now signed a sale and purchase agreement for a 51% stake  for S$26 million (A$25.8 million) in the UnUsUaL group of companies.

This follows mm2’s announcement of its intentions in February and the signing of a non-binding term sheet. UnUsUaL is a Singaporean event and concert production business

Philippines broadcaster ABS-CBN said its net income rose 34% in the first quarter of the year and it posted a net profit of P761 million (A$22.3 million), up from P569 million in the same period last year.

The company posted consolidated revenue of P9.79 billion, up 18% year-on-year.

The company also credited earnings to a new airtime pricing scheme called Cost Per Individual Rating Point system, where advertisers pay based on the company’s ratings performance. It will be the first full year of its implementation in 2016.

Indonesia’s Movie Censorship Agency admits it is confused about how to censor Netflix. Agency chairman Ahmad Yani Basuki told the Jakarta Post, “Honestly, we are confused. Those movies are broadcast in Indonesia by a foreign company using servers located in foreign countries. Common movie media such as celluloid, CDs and DVDs are clear enough, but Netflix is not.”

He expects the Communications and Information Ministry and the Culture and Education Ministry to soon issue new regulations on internet-based movie providers soon.
“Hopefully, there will be a clear category regarding Netflix,” he said adding, “If we are assigned to censor Netflix contents, we probably will have to add more resources.”

• Thailand’s SET-listed GMM Grammy has posted a first-quarter net loss of 144 million baht (A$5.6 million) with revenue falling 12% to 1.99 billion baht. Ongoing investment in two digital channels accounted for much of the loss. Music accounted for 47% of the company’s revenue for the quarter, while home shopping TV and satellite TV accounted for 27%. Media including GMM25 Channel, radio and film, contributed 24%.

• The Cambodian Information Ministry will start reviewing the operating licences of media outlets that fail to abide by a recent order that they refer to Prime Minister Hun Sen by his royally bestowed title of “samdech”. Media groups have been given to the end of June to comply.

• Research commissioned by CCN International into audience demand for its US election coverage shows that in the Asia-Pacific region 52% of respondents select CNN as the number one news source, ahead of BBC at 16%, Reuters at 7% and CNBC at 5%.