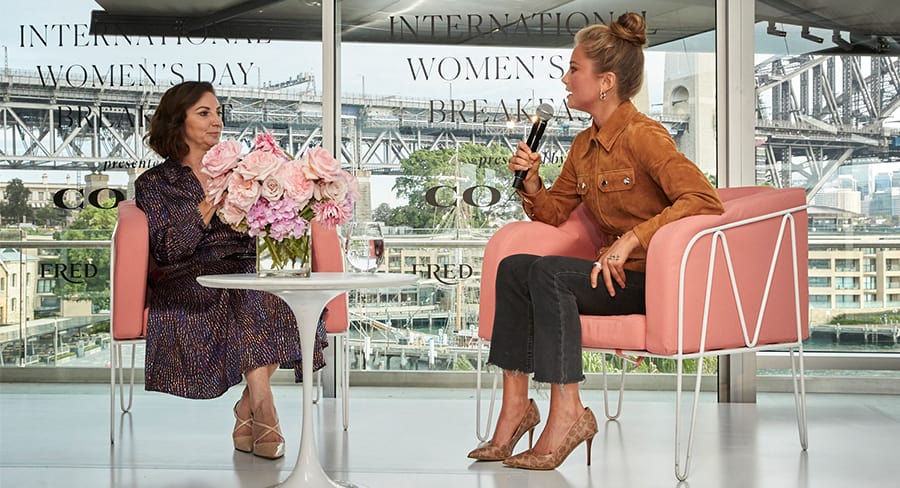 • “We need to address this culture. We all have the capacity to be a leader”

A diverse mix of women shared their experiences about ‘what women want’, evoking an important conversation about sexism in politics, empowering survivors of trauma, and championing female storytelling.

Each represented a unique voice and perspective, the five speakers united to draw attention to women’s rights, gender equality, and the power of speaking out.

The speaker line up included:

Grace Tame, a committed advocate for women and sexual assault survivors, who was recently named as the 2021 Australian of the Year.

One of the longest serving and most respected leaders in politics, The Honourable Tanya Plibersek, who has focused her career on initiating policies for social housing, addressing violence against women, and pushing for gender equality.

Singer and philanthropist Jessica Mauboy, who also appears on the cover of the current issue of marie claire.

Bruna Papandrea, known as one of the hardest working women in Hollywood, having carved out one of the most impressive careers in Australian film to date and championing women in front of and behind the camera every step of the way.

Jess Hill, an award winning investigative journalist and author, who has been writing and researching about domestic violence since 2014.

The breakfast event was moderated by editor of marie claire, Nicky Briger.

Reflecting on 2020, Mauboy said “It was hard because I just changed music labels and new management. What happened was that I’d fallen into this space of kind of manipulation and…. the environment was, although it looked pretty and great, it was pretty scary, I felt trapped”.

Mauboy also spoke about her life growing up, her relationship with her mother, and how music became a safe space for her.

In reference to speaking out, Tame called for everyone “to think of it as a domino…  just be that one domino as your contribution has enormous catalytic potential”.

“I’m a representative of a community of people who’ve been stigmatised for too long… We need to address this culture. We all have the capacity to be a leader,” she said.

When asked what her future looked like, Tame said “I don’t have any plans on stopping any time soon, I won’t stop until child sex abuse is irradiated.”

Plibersek spoke about “making a structural change to politics in 2017 when the Me Too movement was taken on globally, we said we better take a look at our sexual harassment policy and make sure it’s up to date”. She found that there were no real structures or protocols in place to protect anybody who was making a bullying or sexual harassment complaint in parliament.

Plibersek also said, “It’s not women’s responsibility to change culture, but when you have women in an organisation culture changes almost inevitably”.

“I am sick of women being told the reasons that they don’t have an equal say in this country and I am not prepared to put up with it” Plibersek continued.

Despite describing herself as the “fluff” of the morning, Papandrea spoke about the work that went into moving film sets from Los Angeles to Australia and the effect that the stress of her job can have on her physical wellbeing.

She also made it very clear that nobody should ever refer to work from her company, Made Up Stories, as “chick flicks.”

Hill spoke openly about the toll that her year of investigating the family courts had on her. After dealing with so many traumatic cases, she almost turned down the offer to write a book on the topic until she thought “if not me, then who?”

Her book See What You Made Me Do, which put domestic abuse, and the need to criminalise coercive control on the national agenda, won a Stella Prize.

“For 25 years marie claire has championed and celebrated the lives of extraordinary women and today’s event is a highlight in our calendar. We are so privileged to welcome women of this calibre to our stage, influential women who are unafraid to speak up and champion change.”