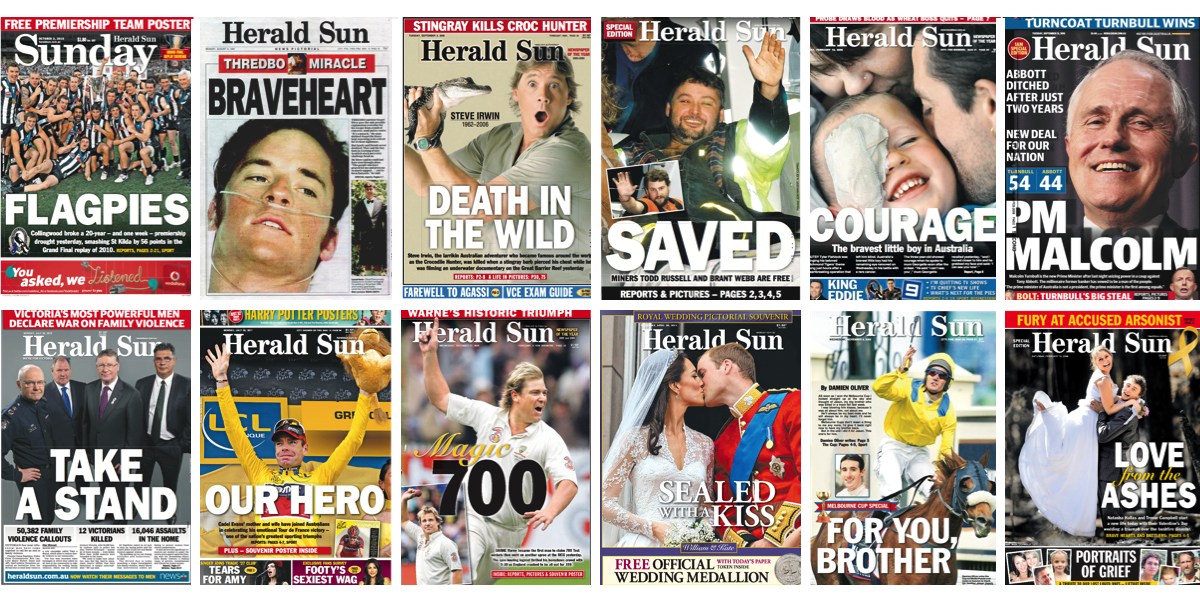 The youthful-looking editor of Australia’s biggest-selling newspaper the Herald Sun is not too young to remember the merging of the Melbourne daily newspapers that led to its birth in 1990.

“I joined the Herald Sun in early 1992,” its now editor Damon Johnston told Mediaweek. He has been there for 23 of its 25 years. And he wasn’t far away when The Herald and the Sun News-Pictorial combined to form the Herald Sun. “When the papers were merged I was in the old building at 44 Flinders Street housing the two newspapers, but I was working as the Melbourne correspondent for the Perth Daily News and the Adelaide News. I was based in the building, but working in an interstate bureau of reporters.

“I remember the day quite vividly. While it didn’t affect me directly, I was in the office that affected the people working around me.”

Rupert Murdoch had taken control of the two newspapers several years prior, and Johnston remembered there had been some speculation about the future of the two papers. “It was a fairly well kept secret until the news officially broke.

“It was one of the biggest shake-ups in Melbourne media history. Both newspapers were institutions and to merge them into a 24-hour newspaper was a significant gamble by Rupert Murdoch that has paid off over time.

“When the papers were first merged there were four editions – two editions being published in the afternoon.”

The afternoon editions were phased out around the time of the introduction of the commuter daily mX over a decade after launch. It was also a time when the internet started to have a significant effect on newspapers.

“The best of both newspapers was combined – The Herald had a proud history of investigative journalism and covering serious public policy issues. The Sun was cheeky, with news breaking as part of its DNA with a strong pictorial focus – from cute animals to courageous children to the best news and sporting photography.

Johnston noted they were two very different newspapers, but they have tried to keep all the things that were important to each newspaper.

“We are proud we continue to cover serious public policy debates such as issues around family violence which has seen us undertake probably the most significant campaign in its modern history. We have been raising awareness for three years and we were the first major news organisation in Australia to identify it and commit to it. Most other organisations have since come on board which is terrific.

“Football, sport and crime are as important as they were to The Herald and the Sun as they are to the Herald Sun.

“Look at the amount of space we have devoted to the footy in the last month. You would struggle to find a front page in the past five weeks that didn’t have some football reference on it. There might have been one edition when we got a new prime minister.

“We are also very proud when we reflect the city. It is a city built around sport, robust debate and multiculturalism.”

The newspaper publishes strong opinion pages with Johnston identifying Andrew Bolt as one of his marquee commentators. “We have a great diversity of opinion writers and we like to think we cover off all aspects of major debates. We don’t want to become an echo chamber for one section of society. I like to think our opinion pages are pretty diverse and offer opinions that may not be seen as typical of a paper like ours. Freedom of speech is important and we publish plenty of pieces that challenge prevailing views and get debate going.”

Johnston explained the average reader is aged in the mid-40s. “It is slightly younger online, but not much. We sell 350,000 or better newspapers most days and it is still three times more than The Age.

“We now have close to 70,000 people who pay for their content for their mobile device or online. Some of those people also get the paper, but others are digital only. That number has grown significantly in the past 12 months because we are now getting the mix right online and the journalism right.

“People are getting used to the fact that if they want great journalism they will have to pay for it whether it is on paper or online. It is not an easy space to be in because there is so much free competition. It’s something we see as important and we aim to build a profitable digital side to our business.”

The editor of the newspaper and his colleagues are continually learning, he told us. “Every day we are. You never stop whether it be in print or online. And it’s more competitive than it’s ever been. There’s never been a better time to be a journalist at the Herald Sun because of the ability to break stories on many different mediums.”

Johnston remembered it wasn’t that long ago that journalists would sit on a story, only having to consider if it might break on television that night before they published the next morning. “Now we make very quick decisions about the best way to publish promptly, at the same time trying to make it profitable. That is something all media companies are learning about almost on a daily basis and we are no different.

“There is no hard and fast rule about what gets published and when. The bulk of the court stories and the police round stories go online immediately. Sometimes we might hold a story back from online until the newspaper is published if it is exclusive. It is also important that the paper looks fresh and the best of doing that is starting the day with an exclusive.

The Sun continues to publish special editions when they warrant. “We have put out a number of 7am editions in the past 18 months. The shooting down of MH17 saw us publish 15,000 newspapers at 7am.” Other events that triggered an updated morning edition included the executions of the Bali nine members, the Lindt Café siege and an afternoon edition was published the day of the death of Crows coach Phil Walsh.

“That underscores our commitment to print and it also reflects all the values we hold dear. Those papers sell well too.

“Although journalism has changed dramatically in 25 years, at its core it is no different.”

Johnston said they are proud to mark 25 years, “but the best is in front of us, I reckon”.

Surviving quarter of a century

One newspaper column still going which moved across from The Herald is In Black and White although Johnston reminded it was rested once before making a comeback.

There are a number of journalists who continue with more than 25 years starting at one of the two merged newspapers. “It is a very different-looking newsroom to what it was in both personnel and technology. Some of the reporters predate me including Keith Moor, Ron Reed, Chris De Kretser and quite a few others.

“One of the reasons we have had such a stable workforce is that it is a special thing to work for the Herald Sun in Melbourne. We remain the state’s biggest-selling newspaper and we have a very popular website. It’s a great place to be a journalist and we value investigative and entertaining journalism.”

How the Herald Sun feeds other news sites

“We recently had the first interview with Kelli Stevens and it was a big football story in Melbourne. The Daily Mail and The Age ripped it off – they embarked on wholesale thievery. They had just a couple of references to News Corp but nothing more. They published bucket loads of quotes.

“Similarly with the Daniel Chick story a little later The Age did the same thing without adding any journalism initially with large tracts of our quotes.

“What it does tell us is that you can’t assume our competitors will operate ethically or morally.”

As to what Johnston would like to see, he told Mediaweek: “Proper attribution and a link. Both stories were behind our paywall and our competitors ripped them off and flogged them to their readers for free.” 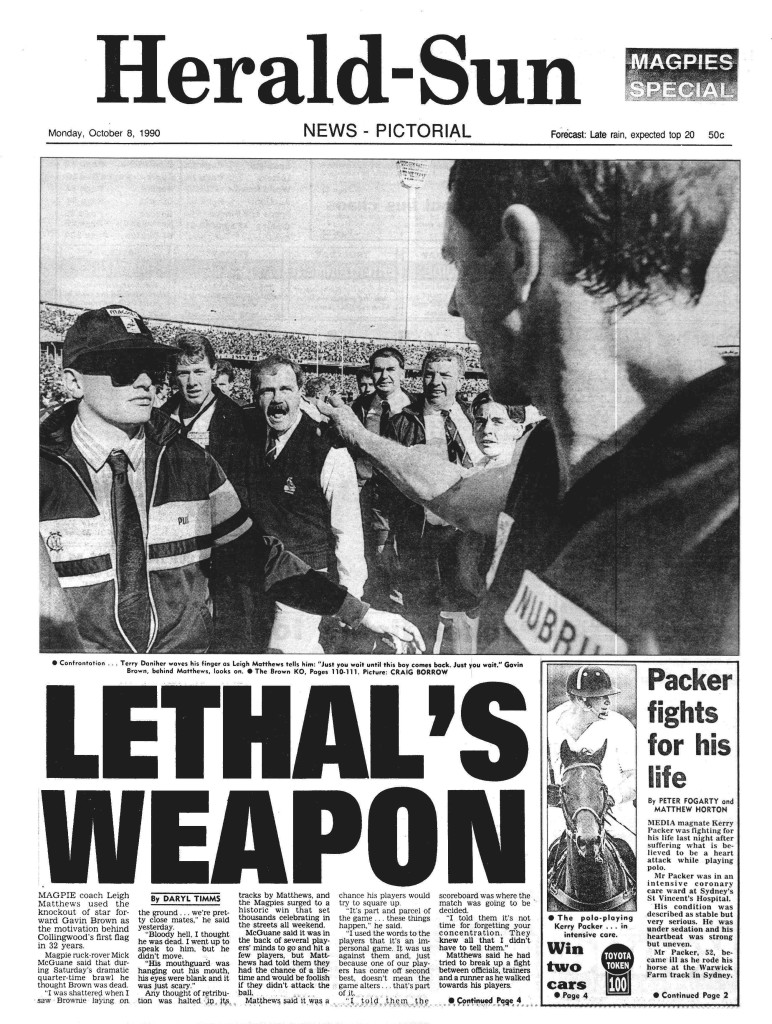 On October 7 1990 Kerry Packer suffered a near fatal heart attack on the polo field and was left fighting for life. And so the front page was set. A day earlier, on Saturday October 6, Collingwood had claimed victory in the re-run premiership clash with Essendon. But just as the pages were being laid, Rupert Murdoch reportedly arrived and ordered a redesign saying that Melbourne was a football town and the first edition must have footy on page one. Packer was bumped to a single column strip, and the headline “Lethal’s Weapon” took over the majority of the front page, at Murdoch’s request.

A birthday party was held on Wednesday night with staff members and prominent Melburnians who have shared the journey with the newspaper. There was also a 24-page lift-out covering the big stories over that quarter of a century. There is also an online picture gallery.