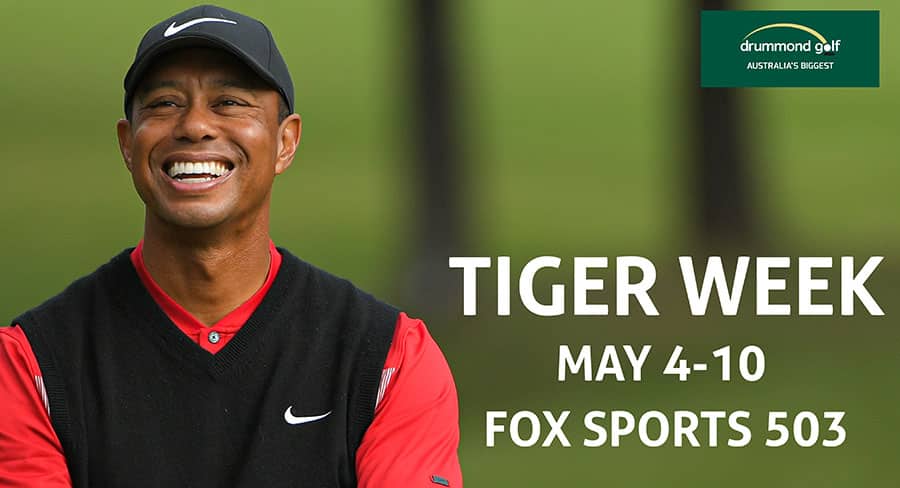 • The week of broadcasting will be sponsored by Drummond Golf

During COVID-19 Fox Sports will dedicate a week to focusing on Tiger Woods re-living 70 of his victories from Monday, May 4 to Sunday, May 10.

The week of broadcasting will be sponsored by Drummond Golf as Tiger Week will give golf fans the opportunity to re-live some of Woods’ greatest moments from his amateur days, first professional win, famous venues plus dramatic shots and finishes.

In October 2019 Tiger won the ZOZO Championship and in doing so equaled the great Sam Snead with 82 PGA Tour wins, while worldwide Tiger has won over 100 tournaments and has amassed prize money of more than $120 million.

Drummond Golf’s Tiger Week will begin on Fox Sports 503, Foxtel and Foxtel NOW, on Monday, May 4.

Fox Sports have prodived a preview for each day of Tiger Week:

Monday, May 4
From 7.00pm, we look back at two of the greatest of all time, Tiger and Jack and 1999 where Tiger dominated Jack’s tournament for 3 consecutive years

Tuesday, May 5
From 1.00pm, whether it was the Open or the Invitational, Tiger certainly took to it when it was in reference to Buick. Catch all six of Tigers Buick Invitational wins.
From 7.00pm, see Tiger at the peak of his powers with his “four peat” at Arnie’s Bay Hill Club, a course which suited Tiger’s eye and was the scene of eight of his victories.

Wednesday, May 6
From 6.00pm, Tiger burst onto the professional scene in 1996 on the back of his third consecutive US Amateur. What made this even more astonishing was the fact that Tiger won the US Junior Amateur the three years preceding.
We go back in time and sit down with the six players that Tiger defeated over his six-year Amateur championship run as they take us through what it was like going head to head with a young Tiger.

Thursday, May 7
From midday, we look at how Tiger closed out the end of the century with arguably one of his best seasons, 1999. Here we look back at seven of Tiger’s wins.
From 7.00pm, we look at Tiger’s blowouts, the tournaments he dominated. We start with the record breaking 1997 Masters and follow with two more of Tiger’s blowout victories.

Friday, May 8
From 3.00pm, we focus on the streak, Tiger’s incredible run in 2006/2007, winning seven straight tournaments that he competed in, starting with the 2006 Open Championship.

Saturday, May 9
From Midday, we look at Tiger in playoffs. Tiger has one of the most impressive playoff records (11 wins-1 loss) on tour, and today we bring you nine of Tiger’s wins by means of a playoff.
Tiger had only played a handful of tournaments as a professional before his first win, the 1996 Las Vegas Invitational. He finished tied first on 27 under par with good friend Davis Love III, the rest is history!

Sunday, May 10
From 1.00pm, we head to Arnie’s place. Tiger Woods and Bay Hill have become synonymous on the PGA Tour. Tiger has played 18 times at Arnie’s place and has won the tournament a record eight times, having lived close to the course for the first 10 plus years of his professional career would no doubt have helped. Here we take a look back at all 8 of Tigers wins at Arnie’s place.

Drummond Golf’s Tiger Week will air on FOX SPORTS (Channel 503) which is available on Foxtel and Foxtel NOW. Content will also be available to stream on Foxtel GO and on demand and also to stream on Kayo Sports.