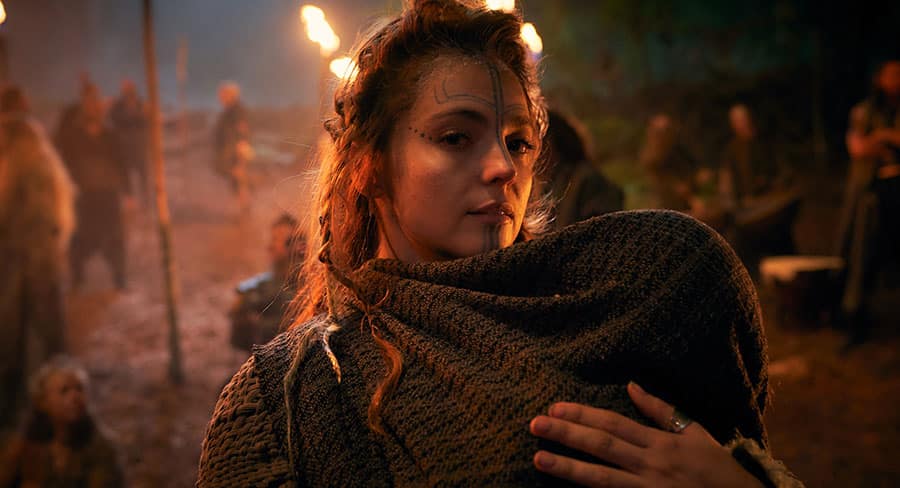 Epic fantasy series Britannia returns for a 10-episode second season on Tuesday, November 12 at 9.30pm, streaming on Foxtel and screening on Fox Showcase. The new season – written by brothers Jez, Tom and John-Henry Butterworth – focuses on fulfilling a prophecy that would save Britannia from the Romans but then an epic battle of wills commences and divides the Druids and puts the prophecy in jeopardy.

The series also sees Australian actress Liana Cornell return as Ania. Cornell is the daughter of actor, director and writer John Cornell and actress Delvene Delaney and she lives between Australia and the UK. In season 2, her character Ania is living with the Druids and thriving. She is learning fast and her ability to look after her child while she learns and practices, impresses all. Cornell spoke to Mediaweek about shooting the second season, her connection with Ania, and what it’s like working with the cast and producers.

Cornell said with season two, viewers can expect more blood, more strong feminine characters and more weirdness. “It’s the wacky world of Britannia. And I think season two is a lot better than the first season.” Cornell loves her character and feels deeply connected with her. “I want to hang out with her every day. She’s such a legend. I do reiki healing, and so a few years ago I started to channel characters like I would with reiki. It removed my ego; if someone didn’t like something, I would just be like ‘well I was channeling Ania in that’. She feels like a real person to me, because I feel her energy so clearly.

“She’s so strong and doesn’t care what anyone else thinks, she’s on her own journey. I just respect her. I think the world would be great with more Anias in it.”

Every character does have some sort of shift in season two. “I think Cait (played by Eleanor Worthington-Cox) has had a big transformation. She’s on this whole journey moving from the girl into the woman, as well as training to be this amazing, hopeful possibility for Britannia. Queen Antedia (Zoë Wanamaker) has a colossal shift. There are also new characters in the new season which is really exciting.

“I think something the Butterworth brothers do so well is that they create these characters and then they just turn it on its head. You’ll finish one season having a terrible time and then by the first episode you’re having the best time ever. You never know what’s coming.”

Cornell has admitted that she loves the Vikings drama series and read all of the Game of Thrones books when she was at drama school. “I remember wishing I could have a role in Game of Thrones, but by that point everyone had really been cast. And, you have to take you clothes off in that TV show,” she laughed. “Britannia suddenly came up and I didn’t have to be naked and I could be this strong female character. I loved it.”

Sometimes the cast and crew for Britannia would need to wake up at two in the morning for shooting the season. “There was one time we filmed from four in the afternoon until six in the morning, and the main producer was dressed as an extra and he was going around just to make sure everyone was happy because he’s so professional – it was so funny seeing him with a blacked out tooth. That night was crazy – there were three actors asleep on the ground, because everyone goes looney by 4am.” The makeup also takes quite a lot of time as there is so much detail to each character’s look. “After three hours of makeup I’m on set and there’s always a little bit of waiting around and then suddenly it’s just ‘action’ and I’m on a horse or battling someone. I also love that I’m outside; I’m in nature and I’m in visually stunning places and that’s just my dream come true.”

Cornell said the whole cast is phenomenal, professional, funny and intelligent. “There’s no ego as well, which I really respect. They’re all there for the story. I feel really blessed there; they are a beautiful family. Phelan (Julian Rhind-Tutt) is my favourite, he’s so funny. He can turn any moment into a comedy sketch. A lot of them are quite like that. I really love Mackenzie Crook who plays Veran – he’s one of the kindest and most talented people I’ve worked with. David Bradley who plays the Druid Elder – he was also Filch in Harry Potter – he is amazingly talented. When you’re surrounded by that much talent, you lift your game.”

Cornell said she loves working with the producers on the show. “James Richardson and I really clicked and he’s a lot of fun, and I haven’t really had that with a producer before where it just felt like we were old friends. The Butterworth brothers are great – they’re crazy in the best way possible.

“I feel special being able to talk about character options and things like that with them because they’re kind of like national treasures. They were open to options with characters and script. They would ask ‘where do you want to go with it?’ and sometimes they’d say no and other times they’d fully take it on, so it’s exciting to act in something where you passionately feel what that character would do.”

Cornell said her favourite episode is where she’s riding in on the horse chopping people. “The situation everyone is in is very funny. It’s such a brutal scene, but what happens is hilarious. There were a lot of nude men around me, and because the blood is made of sugar water there were all these wasps all over us. We were walking through the scene during a take and I saw a wasp go straight into a guy’s bum – and to his merit, he didn’t move a muscle until they called ‘cut’. Everyone is just so committed,” laughed Cornell.

Britannia Season 2 starts streaming on Foxtel and screens of Fox Showcase from Tuesday, November 12 at 9.30pm