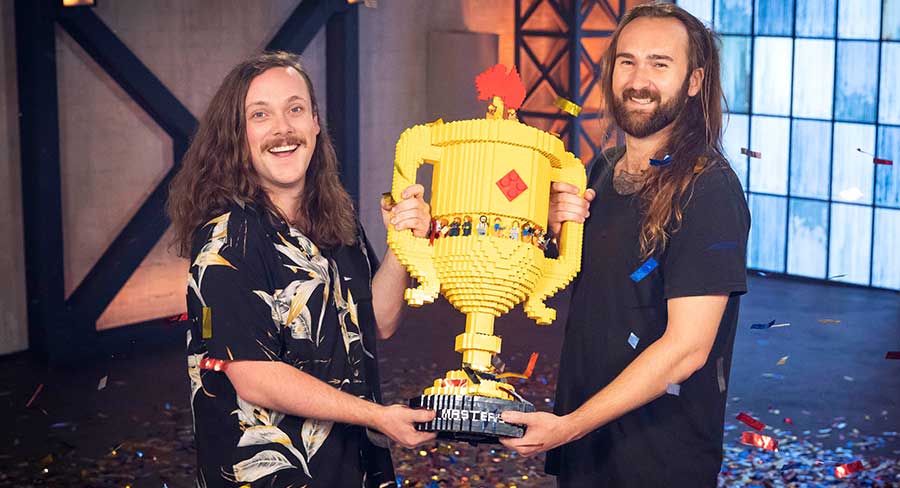 Western Australia’s Alex and Jackson were named the winners of season two of Nine’s Lego Masters.

Branded as Perth-based hipsters the pair were rewarded with a cash prize of $100,000 and the Lego Masters trophy.

Brickman and Hamish announced the final three teams last task was a 28-hour free build. But not only were they trying to impress Brickman, they were also building for 250 members of the public, with each person getting one vote while Brickman’s decision was worth 100 votes.

Jackson and Alex decided to build the Frankenstein-inspired world of a mad scientist. Set in a Victorian-era village, they named their robot the Frankenfig. Their build depicts the Frankenfig bursting through a mountain and terrorising the town below.

Adelaide’s Trent and Josh recreated six characters on a large pirate ship, vowing to build the biggest model Lego Masters has ever seen.

Queenslanders Andrew and Damian named their creation the Final Battle. Their plan was to construct a modern colosseum with two gladiators fighting in front of a huge crowd. They set a massive scale for their build, but an ingenious copy-and-paste technique help them do it at a lightning pace. Problems arose however when they found out that to fill their stadium, they needed at least 4000 minifigs.

Standing at two metres and hitting the workshop lights, as promised Trent and Josh’s pirate ship was the biggest model ever. Damian and Andrew’s colosseum and gladiators proved to be popular with the crowd. But it was Jackson and Alex’s fabulous Frankenfig that won them and Brickman over. Brickman described their winning build as a storybook he just wanted to keep on reading.

Brickman said: “This year’s Lego masters grand finale really was ‘the next level’. With all competing teams having won previous episodes I knew it was going to be a tight race, but not that tight! All three teams really did make amazing and different builds, from the highly detailed robots, to the huge pirates and even setting the scene for a Hollywood monster blockbuster. Like everyone else that has watched the show, I’ve been totally blown away by what they have all done. Alex and Jackson really took what they had learned over the series and made something truly spectacular.”

Jackson said: “The chance to participate in Lego Masters was a childhood dream come. Finishing with the win has been absolutely unreal. We never thought we would be standing here today with the trophy in our hands. The calibre of builders in this competition was next level, and we were really pushed to our limits. We’re so grateful to everyone we had the honour of competing against, and particularly to our fellow finalists for sharing this crazy journey all the way to the end.”

Alex said: “It’s surreal to have won the show. We were up against incredibly talented builders and, challenge after challenge, I was totally intimidated by the quality of the builds. The other competitors pushed us to a level that we would never have achieved on our own. I am just so grateful to have been given the opportunity to compete on the show and getting the win is really the cherry on top. Getting to see the production in full swing was unreal. So much goes into creating the show – the people behind Lego masters are incredible. Competing with Jackson was an absolute delight. We’re super close friends and I wouldn’t have wanted to do it with anyone else. Can’t wait to see what’s next for us but it’s going to be pretty tough to top this feeling!”