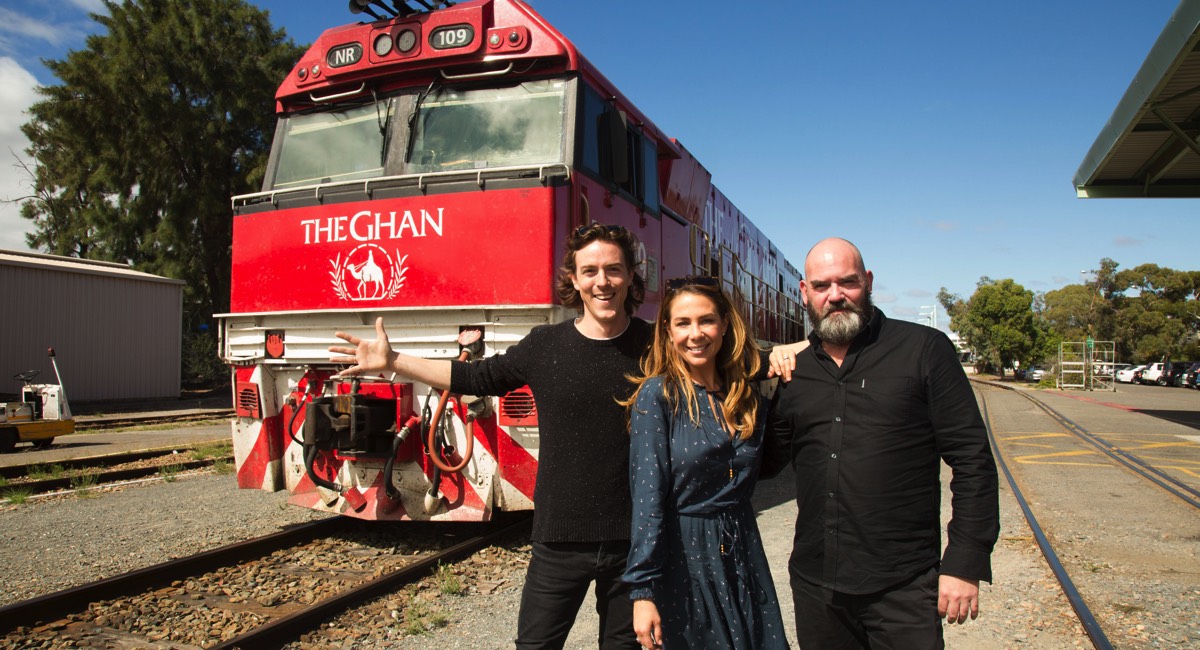 Nova’s Kate, Tim and Marty catch the Ghan to Darwin

It was a shaky mobile phone connection when we managed to get a few minutes with Nova’s Marty Sheargold on the phone on Tuesday morning. The co-host of Australia’s #1 national drive show (average share 11.4% and 1.54m cume: Survey One) was speaking from Katherine in the Northern Territory.

The Nova drive show travelled by train this week from Adelaide to Darwin as part of a Nova Entertainment partnership with Thirsty Camel bottleshops. The shows, branded Show From A Train, follow last year’s Show From A Plane.

Even though it was early morning when we spoke, Sheargold said it was already very warm. He hadn’t packed properly for this trip across central Australia, he revealed. “I should have checked the weather first. I am wearing the heaviest shirt anyone has ever worn in Katherine…and my balls are on fire!”

The drive show is on fire too if you’ve listened to either of their shows from Alice Springs or Katherine this week. The train carrying the radio superstars thundered out of Adelaide on Sunday and made it into Darwin late on Tuesday. Sheargold: “It’s just two days on the road, but it feels like 14…I have aged seven years. It looked good on a whiteboard.”

Sheargold was clearly enjoying his trip and he couldn’t resist dropping some good gear into the phone chat early on. “I’m not sure what it is, but there is something about just lying in bed looking at the bush, and then looking out the window. But is just so relaxing here.”

Sheargold chuckled when we asked if he was a man who didn’t warm to the outdoors and was not a great traveller. “That’s not entirely true. I once paid $1,500 for a tent and just used it for two days. I thought it would be good, but I soon realised that is what hotels are for.”

While some radio events grow from talks between the station and sponsors, not this one apparently. Sheargold had been trying to get this adventure under way for three years.

“We started talking about this trip years ago. When we come up with a concept we kick it over to sales and it will sit there for a while. It will be front of mind, back of mind, middle of mind and then there will be a few meetings about it. It depends on how big the idea is. As you can imagine, this isn’t cheap to undertake and you need someone to invest. Until Thirsty Camel came on board we couldn’t afford to do it.”

Nova Entertainment had a big team on the road for the Show From A Train. While not quite the level of touring party for a Nova Global Red Room Tour, the trip from Adelaide to Darwin included the three hosts, program producers, two tech guys, Nova head of programs Peter Clay and digital team members.

Sheargold had initially had an idea to broadcast from the Kokoda Track, but after the Nova Brisbane breakfast team did that last year he thought it better to hold off. “We didn’t want to be the 16th show to do Kokoda.”

Sheargold admitted he wasn’t quite sure what to do next. “We have done the plane, the train and the car. What we might think about is a boat ride somewhere…a Show From A Boat.”