• RNB Fridays welcomes its newest DJ, Jason Derulo, in the house every Friday! 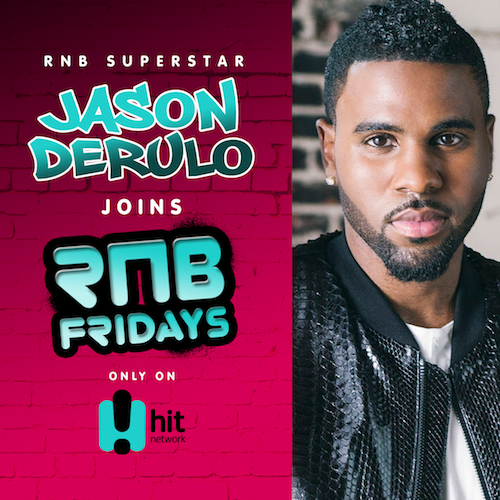 One of the world’s biggest RNB Superstars is set to take over RNB Fridays.
Jason Derulo loves RNB Fridays so much he is getting behind the mic as celebrity DJ for the Hit Network, playing his favourite RNB tunes nationally every Friday from 9am beginning May 13.
The American singer, songwriter and dancer has as sold over 50 million singles and has achieved eleven career platinum singles, including his first ever radio hit “Whatcha Say”, and hits including “Talk Dirty” which sold over six million singles and become #1 worldwide.

Always keeping things fresh, Jason has also recently released a brand new single “If It Ain’t Love” and from his current album “Everything is 4” has already notched up a double platinum smash hit single “Want To Want Me”.
Derulo worked with some of the music industry’s elite, including Drake, Katy Perry, Bruno Mars, Rihanna, Beyoncé and Taylor Swift, who have scored five platinum singles from one album.
Under Derulo’s lead, RNB Fridays will continue to feature the biggest and best tracks played across the network, including classing bangers from artists like Derulo himself, Destiny’s Child, Drake, Nelly, Ja Rule, TLC, Salt n Pepa and many more!

Head of content for the Hit Network Gemma Fordham said, “RNB Fridays has been incredibly successful for the Hit Network and we are thrilled to welcome one of the biggest artists in the industry, Jason Derulo to the team,
“By playing a selection of the best RNB tunes every Friday we have seen a 12% increase in listeners across the Hit Network when compared to Monday-Thursday.
“The Hit Network is #1 for all people on Fridays and we endeavour to keep it that way by delivering the best variety of RNB music across the workday.”