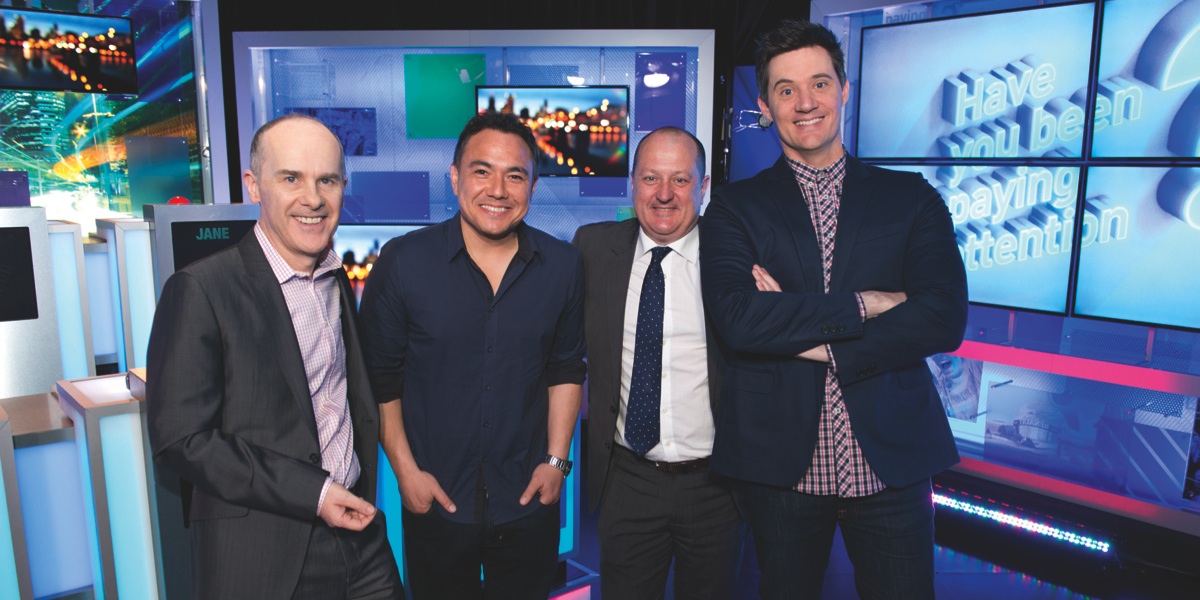 We spent some time behind the scenes of TEN’s hit show Have You Been Paying Attention?.

Sam Pang and his sometime collaborator Ed Kavalee are now regulars on TEN’s Monday evening hit Have You Been Paying Attention? The Working Dog production this week celebrated 55 episodes and we spent time with Pang after watching the taping of the 55th on the Sunday before it goes to air.

Pang hasn’t been on all episodes though. “Ed and I seem to be on most of them and every now and then we miss one,” the Melbourne-based comedian told Mediaweek.

Part of the reason he missed some last year was because he travelled a lot for several SBS projects he was working on including Eurovision and a World Cup travel show. “There was quite a bit of travelling last year and somehow the show survived.”

Asked about the preparation required for each week’s episode, Pang explained: “I like to keep abreast of the news. Mainly the Korean News and it’s been a real disappointment there haven’t been more questions. I sit down on the set and have no idea what anyone is going to say and I am always constantly surprised by what Ed thinks is funny.”

Although it is a small set, the producers do sit Pang and Kavalee as far apart as possible.

As to projects they have worked on together, Pang has a part in Ed Kavalee’s next movie. “And I wasn’t paid,” he noted before Kavalee, who was also part of our conversation, shut down chat about the film’s finances.

During Mediaweek’s visit to the HYBPA? set, Pang was talking to Network Ten Melbourne’s Russel Howcroft and the comedian asked one of his bosses if the show would be renewed next year. Howcroft smiled, but indicated that he could not pre-empt anything coming at the 2016 Upfront in November. There was then some speculation as to whether Pang was contracted to a new season if it does return.

“We hope the show comes back and we all love doing it. But Russel was on the show and he seemed very cagey with the answers about its future.”

Kavalee wondered if Ahn Do might be available and talk then turned to what Pang does between his Working Dog commitments. Turns out quite a bit.

“I am doing an AFL project online with Mick Molloy and Andy Maher called Friday Front Bar. We have been doing it every week of the AFL season and it’s available at AFL.com.au. We have a Grand Final show coming up on Grand Final eve. We have a production meeting every week and then we shoot it on Thursday before it goes online on Friday.”

Pang has done seven Eurovisions for SBS that started in Russia. “We originally had about four people and then this year Australia was even competing in it. It was a bit of fun and more of a reward for the genuine interest in Australia in Eurovision.”

Pang said it was always fascinating to see how the Eurovision host city is chosen by the winning country. “You assume it will be the main city or the capital. The year Germany won I thought we’d be going to Berlin. Instead it was Dusseldorf. Three years ago Sweden won and I thought, good, we are off to Stockholm. No…it was Malmö.”

Pang revealed that he had yet to be signed for Eurovision 2016.

When asked if he had an agent, Kavalee compared Pang to the great Bill Murray. “If you want to get in touch with Sam you have to leave a note at a pizza shop at midnight and then you might be lucky to get a call back.”

Pang: “I love that people are obsessed with contacting me and finding out what I do Monday to Friday. It’s really not that fascinating. I have just started with someone who represents me, but for the last four years I have had no one.”

“I get asked a lot if Sam and I are really friends because I give him a bit during the show. I can categorically say we are as good friends as Kevin Rudd and Julia Gillard.”

Pang: “I never get that question. People just assume that we don’t like each other.”

Kavalee said Working Dog uses a lot of radio people on the show. “If you work in the media, especially in radio, you just know what is going on. That is what the show is about. The show is different every week and the mix of the people is what makes the show.”

Kavalee has long been in demand on radio and he currently co-hosts breakfast at Triple M Brisbane alongside Marto.

After making lots of gags about Santo Cilauro (“He still thinks this show is The Panel) and Cilauro’s Working Dog colleagues, Kavalee noted: “People don’t have an understanding of how much individually and as a group these people can do. The team are all unbelievably skilled at what they do.”

Pang jumped in with: “What we are trying to say is that perhaps Santo’s best is behind him – The Castle was a long time ago.”

Kavalee has promised to speak to Mediaweek again about his forthcoming Border Protection Squad movie and how no one should ever fund their own production.

Sam Pang yet to be confirmed as returning to Have You Been Paying Attention? in 2016. Pang also yet to be re-signed for Eurovision 2016!

NO PERSON has featured on every episode of Have You Been Paying Attention? Even host Tom Gleisner missed one when he was replaced by Jane Kennedy for one week. “It was the most-watched episode ever. They should send it into The Logies,” said Kavalee.