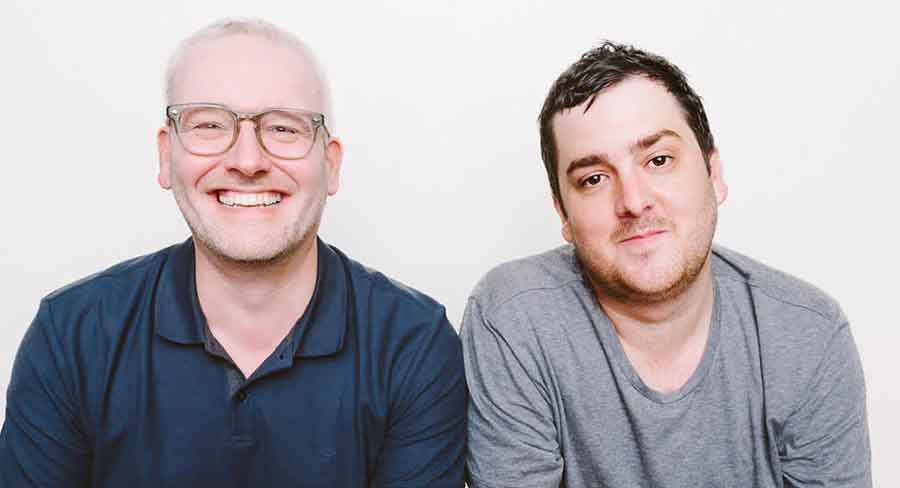 Ludo Studio has had a number of significant milestones in its eight-year history. The production house is best known for the all-ages animated hit Bluey, but on its short journey the company has produced seven series, is in development on another, and is soon to announce one more.

It has also started to fill the trophy cabinet with International Emmys, a Logie, SPA Awards and a couple of AACTA Awards. 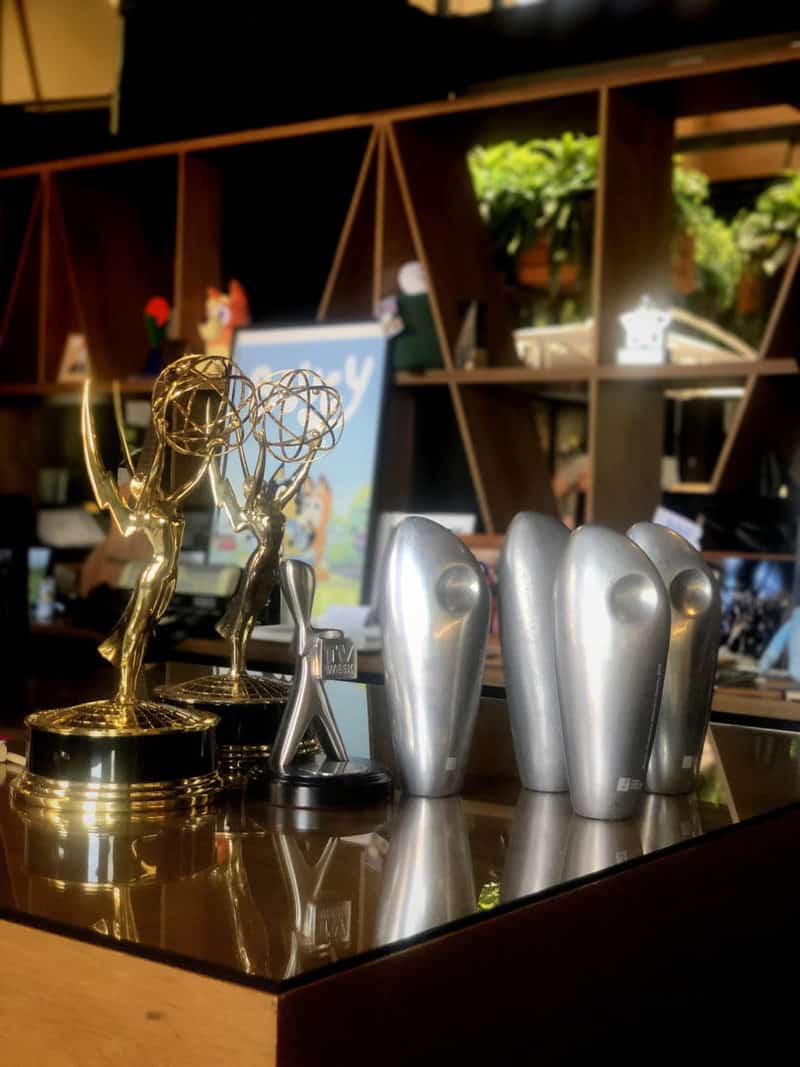 Some of the Ludo Studio trophies

Co-founders of the Brisbane based business are Daley Pearson and Charlie Aspinwall. Pearson is a triple threat – writer, director and producer. Aspinwall is producing Bluey as well as working on expanding the Ludo slate.

Ludo Studio has had a busy week with another AACTA win and the screening of the second Bluey Christmas special, an episode on ABC Kids that managed to outrate most of the shows the day it screened on all FTA TV channels.

“It’s just an honour to be nominated,” Pearson told Mediaweek about their award wins. “We have been lucky.” Most of the Ludo productions seem to have won some sort of award.

“This is the second Bluey Christmas special after we did one in 2019,” added Pearson. “It did really well first time and we have decided to go again. They are also seven-minute episodes. There will be a Christmas Eve screening too this year on the main ABC channel.” 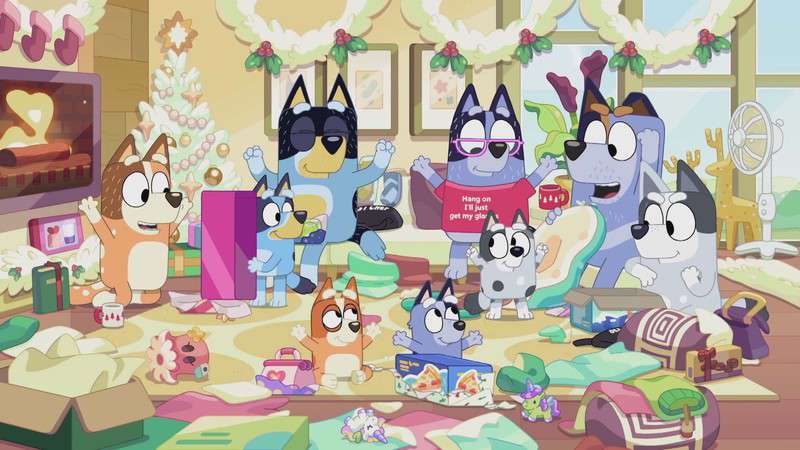 The best reward though is perhaps big audiences and that is what the second and now third seasons of Bluey have been attracting.

Pearson and his colleagues always thought Bluey was a pretty good concept, at the same time realising the audience would be the ultimate judge.

“Joe Brumm, the creator of Bluey, had the initial idea and it was all about his family. The shows we have found that have done well are the ones the people making it are living it,” said Pearson.

“We made a five-minute episode initially and then things moved quickly with the ABC picking it up, and then BBC Studios coming on for distribution.”

Ludo went ahead with a pilot episode after people didn’t quite understand what they were being pitched. “People weren’t sure if it was Peppa Pig or The Simpsons. We were answering that it was kind of both of those!

“The idea from Joe, Charlie and I was that it was made for co-viewing – parents with their kids to watch together.

Pearson said part of the success was due to where the program screened. “Around the world there doesn’t seem to be anything else quite like ABC Kids, a channel that is trusted by much of the country and people are not worried about putting their kids in front of it. It was the perfect show for that channel.

“We really worked hard trying to get the word out with some marketing. The show started to look after itself pretty quickly, but we had to light a few fires before it really caught on.”

Season 1 of Bluey was 52×7 episodes as was Season 2 which has just finished, with Season 3 now onscreen here.

It takes Ludo Studio four months to complete an episode with four teams working on different episodes at once.

The pilot episode had just a handful of people working on it, with Pearson noting that those originals are still part of a much bigger Ludo Studio team.

Pearson estimates that when they had a number of different series in production last year there were about 70 people coming to work. “It has changed a bit over the past five years.” Ludo Studio is keeping a lid on the demand for Bluey content and associated products. When asked how much more Bluey and associated merch people have asked them to make, he replied, “A ridiculous amount! People would be using Bluey key chains, Bluey cars, Bluey everything…

“We like to think we have integrity about everything we make. We try to make the books and the toys as good as the show and it has almost driven us a bit mad. The scale of it lately is almost getting too hard to deal with. Luckily we have great partners in BBC Studios, Moose who do the toys and Penguin who do the books.”

Ludo Studio has considered diversifying from offering only seven-minute episodes. Pearson: “We are just now trying to figure out what that could be. We have thought about both a feature and slightly longer eps, but we haven’t landed on anything yet.”

While they are mindful of keeping the core of what is special about Bluey, Pearson said they just haven’t had the time to fully consider the possibilities. “Just making 52 episodes takes up all our time, it is a ridiculous amount of episodes to have to make. Every episode is different with a new script, new score, new characters often and mostly new locations.” 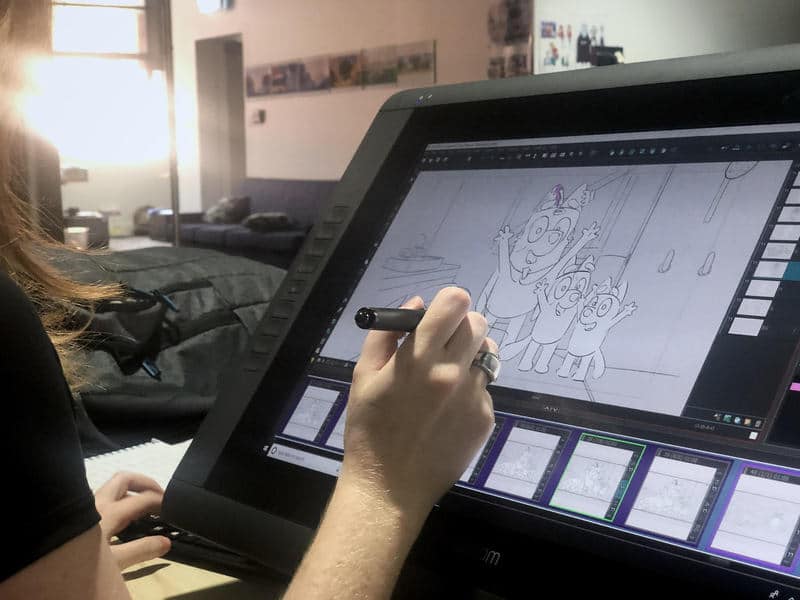 Artist at work on Bluey

Although Ludo Studio’s main focus is Bluey, that hasn’t stopped them from working on other projects. The year Bluey launched there were three other series released. The production house has also sold a new live action drama for an SVOD platform that should be announced soon. Pearson joked: “This will look like a ‘proper’ show, but will still qualify as quirky.

“The thing I love, and most of us at Ludo love, is making the shows. But to be able to get to that privileged position you need to do a lot of boring work. In the six years since Charlie and I started Ludo we have worked long days.”

Pearson likes being a proud independent, but he revealed the business has had overtures regarding investment and partnerships. “We love to collaborate with people on our shows project by project, but the interest to be bought up by someone is not there at the moment. We really love what we are doing. We have had a lot of interest, but we are happy at the moment.”

“So far we have found it hard to collaborate and work with someone if they are not in Brisbane. Despite all the technology available, it works best to be next to the person, at least in the start of the relationship.

Pearson said he and the Ludo team have been very lucky being in Brisbane during Covid. “Everything we have done we have made in Brisbane. Partly because we are perhaps too lazy to want to shoot in New York or elsewhere. The problem for us has been trying to find studio space for our new drama. All the facilities have been booked out by international productions.:

Principal production investment from BBC Studios, in association with Screen Australia. Post Production, Digital and Visual Effects work undertaken in Queensland, Australia with funding from The Queensland Government through Screen Queensland and the Australian Government. 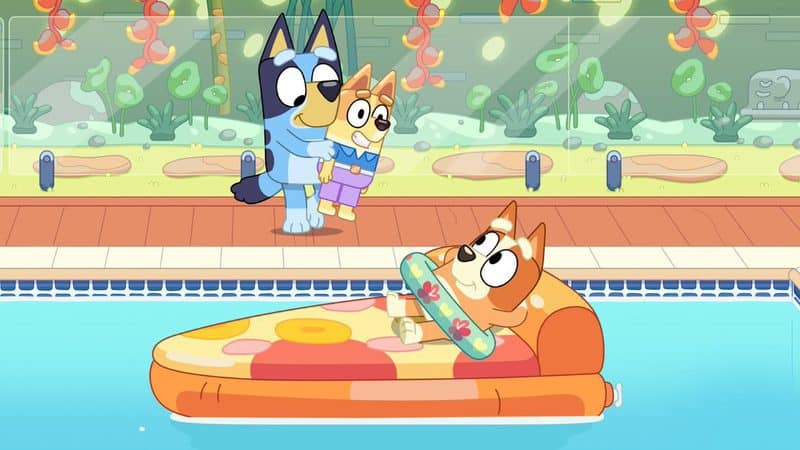 The ABC has calculated Bluey attracts over 1 million metro viewers and has VPM average audience of 2.2 million.