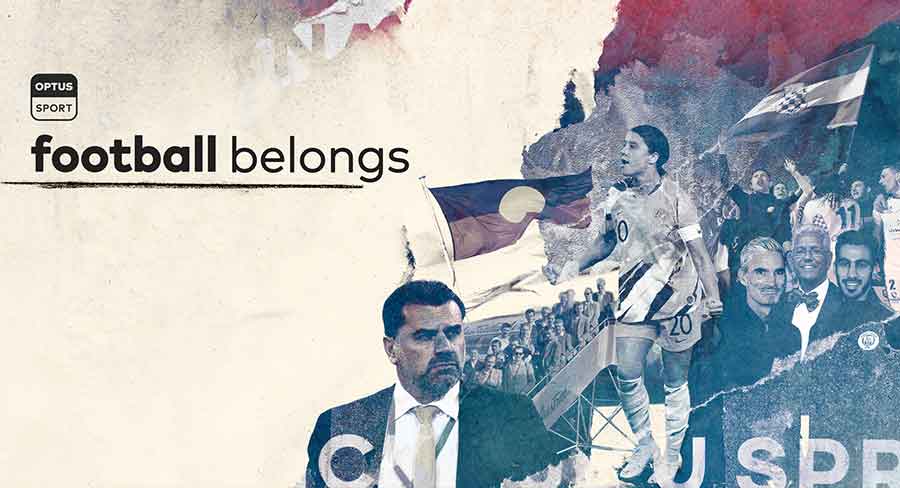 • The Football Belongs title was launched by Optus Sport in 2020

Optus Sport has begun its release of a new instalment of Football Belongs, with a series of special feature articles and podcasts that chart the cultural threads of Australian society through the lens of nine football matches.

The Football Belongs title was launched by Optus Sport in 2020 to tell the often-unheralded stories of Europe’s contribution to Australian football and society.

Over the coming months, in-depth articles written by John Didulica and accompanying podcasts hosted by David Davutovic, will explore how football has played a fundamental role in shaping the nation, whilst examining the game’s contradictory struggles to penetrate the mainstream.

Former National Soccer League player Didulica has had a deep involvement with the game since retiring, having heavily dedicated his time to the project since stepping down as chief executive of Professional Footballers Australia earlier this year.

“I always believed that football’s journey and the trajectory of Australia’s success as a modern nation were interdependent; that building and embracing an authentic football culture went hand in hand with our nation emerging with the humble self-assuredness it would need,” said series author Didulica.

“In examining Australia – as I saw it – it’s incredible how influential football has been to both shaping modern Australia but also reflecting the nation that we are. Equally, I was challenged by football’s absence from the stories that are used to define what it means to be Australian.”

The first article The Outsiders will be released on Friday December 4 on the Optus Sport app and sport.optus.com.au, while the podcast will be available via Acast, Spotify or Apple Podcasts. Readers can also access each podcast within each article. In episode one, David and John are joined by renowned football media personalities Andy Harper and Tracey Holmes to set the scene for the discussions to follow.

Other threads of Australian society and culture to be explored include pieces on multiculturalism, the First Nations people, cultural cringe, the march toward gender equality, obsession with borders and the legends of the ANZACs, while David and John will be accompanied by a rotating line-up of guests including Socceroos legends Ray Baartz and John Aloisi, as well as renowned historians and academics.

“Through this series, we hope to share the stories of football’s valuable role in building this nation and demonstrate to the many millions who play, watch and love this game that they should take unconditional pride as Australians in being members of our football community,” said Didulica.

Optus director of sport Richard Bayliss said Optus Sport was proud to carry such depth of discussion on the history of the game in Australia.

“The Football community in Australia will only have confidence in a successful and unified path forward – and its own skin – once it can draw inspiration from its own unique place within the nation’s identity,” said Bayliss.

“John’s ability to explain the broader cultural context – at times painful, at others uplifting – illuminates the game’s landmark moments in a stirring way.”

“These chapters contain some of the best writing on the game in Australia I’ve ever read, and the calibre of discussion led by David throughout the podcasts provides a gripping listen.”