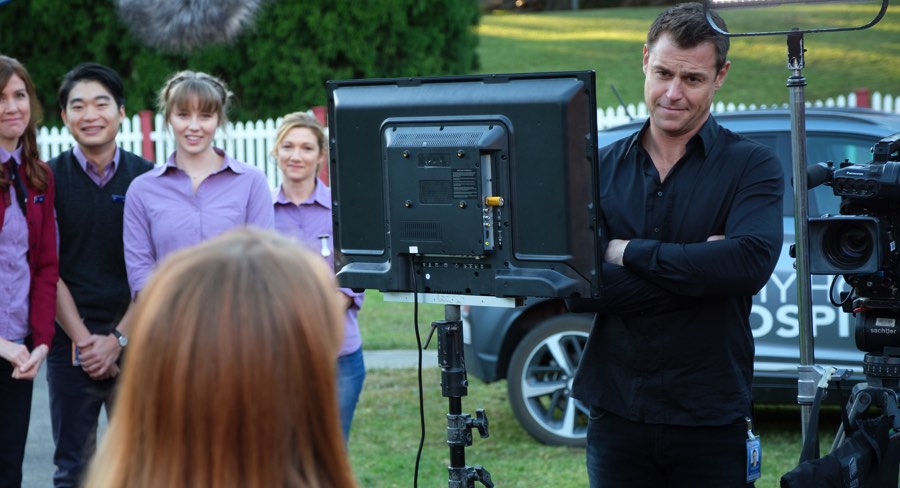 Australian actor Rodger Corser has been a part of some of the biggest local projects in the last two decades. With shows like McLeod’s Daughters, Home and Away, Underbelly, Puberty Blues, Miss Fisher’s Murder Mysteries, Glitch and The Doctor Blake Mysteries to his credit, Corser has established himself among the leading actors in the local industry.

His latest starring role, in Nine’s Doctor Doctor, will be coming back for a third season on August 6. The show is filmed in Sydney as well as in the regional NSW towns Cobbitty and Mudgee. Doctor Doctor gives Corser a happy mix of comedy, drama and action in the form of medical emergencies. “It’s a good challenge,” he told Mediaweek.

When the first season of the Nine show hit the screens in 2016, Corser and the team behind the series weren’t sure if it would come back for more seasons.

“You never know. Everyone is always positive at the start of every show but at the end it’s up to the audience,” he said. “We are thankful that we are on our third season. We are gaining momentum if anything – the network is happy and the show was nominated at the recent awards too. I’ve also got more feedback on this show than I have ever before.”

Corser has been working in the industry for two decades. He’d never imagined himself in front of the camera, he told Mediaweek. “I studied Bachelor in Media Studies and it was more about being behind the camera than in front.”

He started his acting career on stage in 1998 in Rent. After that there was no looking back. The television industry has changed exponentially in the last two decades. It can be a scary environment for an actor, Corser said.

“When there were only Seven, Nine, SBS and ABC, there were longer run shows. Some shows like Stingers on commercial telly would run for 40 episodes a year,” he said. “When I did Last Man Standing in 2004, we did the first series with 22 episodes – that’s unheard of now.”

Competition and more choices for viewers are the two main reasons for this.

“There is so much choice. People’s attention spans are shorter these days,” Corser said. “There are more local productions, but they are shorter runs. There are more crews employed but for a shorter time. There’s less job security throughout the year. You are looking for work more often.”

The changes in the industry have their positives and negatives.

As an actor, “You get variety and are tackling more new things,” Corser said. “It’s refreshing and exciting. The flip side of it is that on a six-episode job, you’ll get nine or 10 weeks’ work in a year. That’s not enough, really. Even if you are in demand, you can’t get every gig, you are not right for every role and you can’t get a job on three commercial networks at once.”

This is a part of the reason why local talent is looking to overseas markets for work, and technology has helped this process.

“Twenty years ago, only 20% of the people I knew were looking for jobs overseas. But now it’s pretty much everyone,” Corser said. “Previously, you would have to send a physical tape by courier. Now you can send an email link and they can see it immediately without you having to be there.”

As to his aspirations, Corser said he is focusing on finishing the filming of Doctor Doctor and is hoping that the audience gives the third season as much love if not more than it gave the previous two. “Hopefully, we will go on to make a fourth season,” he said.