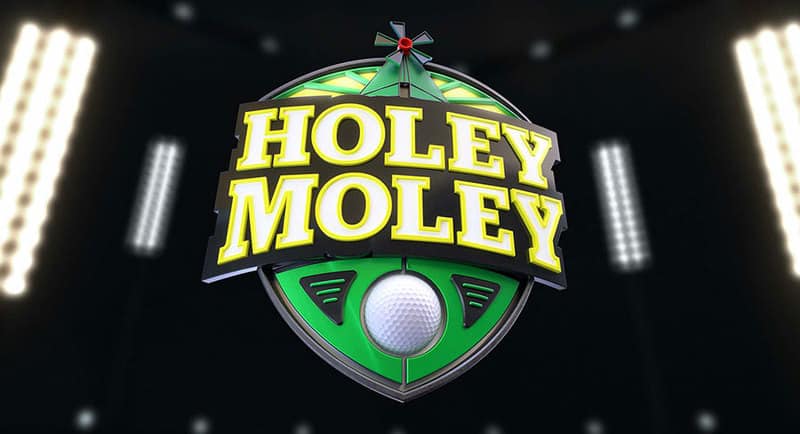 On Channel 7’s Holey Moley, Australia’s most skilled and passionate golfers will come from across the land to take on the most epic mini golf course ever created, but only a new breed of contender will survive this competition.

Towering windmills, fire-breathing dragons, shark-infested lagoons, and a giant sausage – it’s the course that has everything. No inch of astroturf has been left unturned in creating this unmatched test of precision putting and stamina.

Holey Moley is created and produced by Eureka Productions for the Seven Network. A smash hit on America’s ABC Network, season 2 averaged 4.5 million viewers in 2020.

How Does Holey Moley Work?

In the first round of each episode, eight players compete in a series of head-to-head matchups. Only the four winners go through to the second round to battle it out.

Those who are victorious head straight to the final hole. The remaining two compete in the Distractor Duel for the last spot in the final three-way battle.

The ultimate winner of each episode takes home the prestigious plaid jacket, the golden putter and books a spot in the Grand Final where they will compete for the chance to win $100,000 on the daunting last hole, the Tomb of Nefer-Tee-Tee.

Greg Norman (aka the Great White Shark) serves as Holey Moley’s Resident Golf Pro. Having played the most outstanding courses in the world and won more than 90 championship tournaments, including two Open Championships, the Holey Moley course is pure genius from the mind of the master.

Sonia Kruger will host the spectacular and unpredictable on-course competition action as the golfers make their way around the Holey Moley holes. 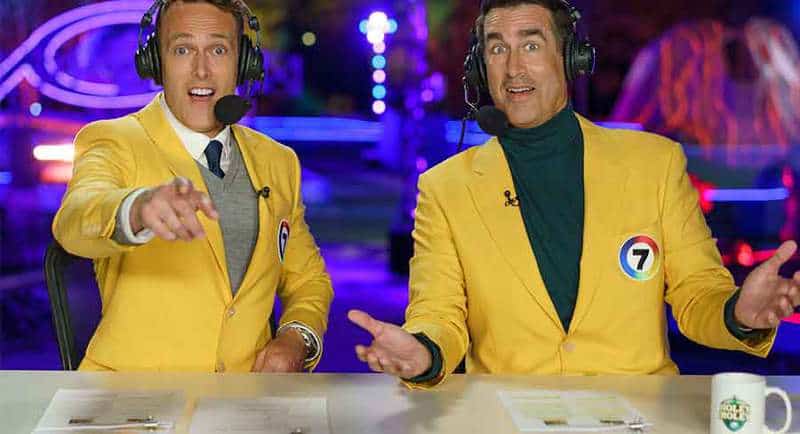 What Are The Holey Moley Holes?

Golfers will putt through two giant windmills and over a bridge. Once their ball makes it across, the golfer must time their run and jump through the two windmills. If they get hit by the windmills and knocked into the tulips, they will receive a penalty stroke before putting it out on the chequered green.

Golfers face the wrath of the Holey Moley dragons on the most dangerous hole on the course. Golfers putt their ball through the drawbridge to the green while four dragons scorch them with fire.

Giant rubber ducks rock back and forth across this putting green. Golfers putt their way to the green over a giant tub of bubbly water. If they can’t dodge or duck the swinging birds, they’ll land in the tub with a stroke penalty. Once they escape the ducks and make it to the bar of soap, the golfers are in striking distance of the hole.

This hole is no picnic. One at a time, golfers putt to a green across an enormous barbeque, then navigate a rotating prawn, corn and sausage. Falling in the coals below incurs a stroke penalty, but make it across and you’ll be cooking with gas. Once both golfers make it across the barbeque, they will putt for the win.

On “Go!”, golfers will race up the icy, slippery slope to the top of Mt Kosciusko. The first golfer to the top gets the better ball position. One at a time, golfers putt through the giant polar bear’s legs, down the mountain. Golfers then slide back down to the green to have a crack at the hole.

Golfers must take careful aim on Hole Number Two. After they have teed off, our golfers must run down a 10-metre channel lined on one side with eight port-a-loos. Golfers will have to watch their step because at any point during their run, a dunny door could unexpectedly fly open sending them into the water below.

Golfers must putt through the yellow hazards around the Holey Moley graveyard to the hole. It’s a simple enough course, but golfers are highly motivated to sink their putts quickly. Every time they miss a putt, Dr Frankenputt will use all the electricity from the Holey Moley course to administer an electric shock straight to the golfer.

On Uranus, golfers attempt to hit their ball around the rings of the planet to the chequered green. Once the ball completes its orbit, the golfer tries to jump across the Solar System without falling in the water. If the golfer can’t stay dry, they will receive a penalty stroke. Once both golfers have made it on the green, they will putt it out until there is a winner.

Golfers putt a ball up a steep slope where it will bounce among the lava rocks to various holes leading to the other side of the course. Once a golfer’s ball lands in a hole, they will run up the stairs, jump on the zipline and shoot towards a giant pole. If they can jump off the zipline and land on the pole, they will be rowed to safety and onto the tiki-inspired green. If they miss, it’s a stroke penalty.

Golfers head out to the tee to be greeted by Holey Moley‘s celebrity pirate Dead Eye Dicko. Prior to the hole, the two golfers have a mini putt off that determines whether Dicko chips their ball to the other side of the course whilst wearing one eyepatch or two. Then it’s time to walk the plank and leap onto Greg The Shark as he circles around the pirate ship. If they miss and fall in the water, it’s a stroke penalty. Once golfers wash ashore, they’ll need to avoid sand traps and pirate treasures to finish the hole.

Golfers will putt across the paddock and into the hen house. But they must putt carefully as a miss-hit will plant them into the rough or even worse, hit the Angry Chicken. Once golfers get their ball to the green, they’ll need to traverse the rotating log. Fall, and sticky feathers and a stroke penalty awaits.

Golfers hit their ball up a giant wave, launching it through the air to the green. As Golfers try to cross the bridge to the green, fierce jets of water will shoot out at them with enough force to knock them into the water below. Get knocked off the bridge and it’s a one-stroke penalty.

Once harnessed into the giant rotating clown wheel, golfers spin around and around and must putt the ball while hanging upside down. Every time a golfer misses the hole, they will cop a pie in the face.

What seems like a simple hole may be one of the most difficult. Focus is the name of the game on The Distractor. One at a time, golfers will attempt a 12-foot putt. But a rotating wall will reveal a colossal (and often bizarre) distraction. The golfers take turns until someone sinks the 12-foot putt.

Golfers must putt their ball through a mirage of rotating pyramids. After passing through the Valley of Kings, their ball will snake its way down a ramp onto a green oasis. If they sink their putt in one shot, it will unlock the coffin containing their $100,000 prize money buried under the Sands of Time. The three finalists will go shot for shot until one of them sinks a 100-foot hole in one and takes out the Holey Moley competition. 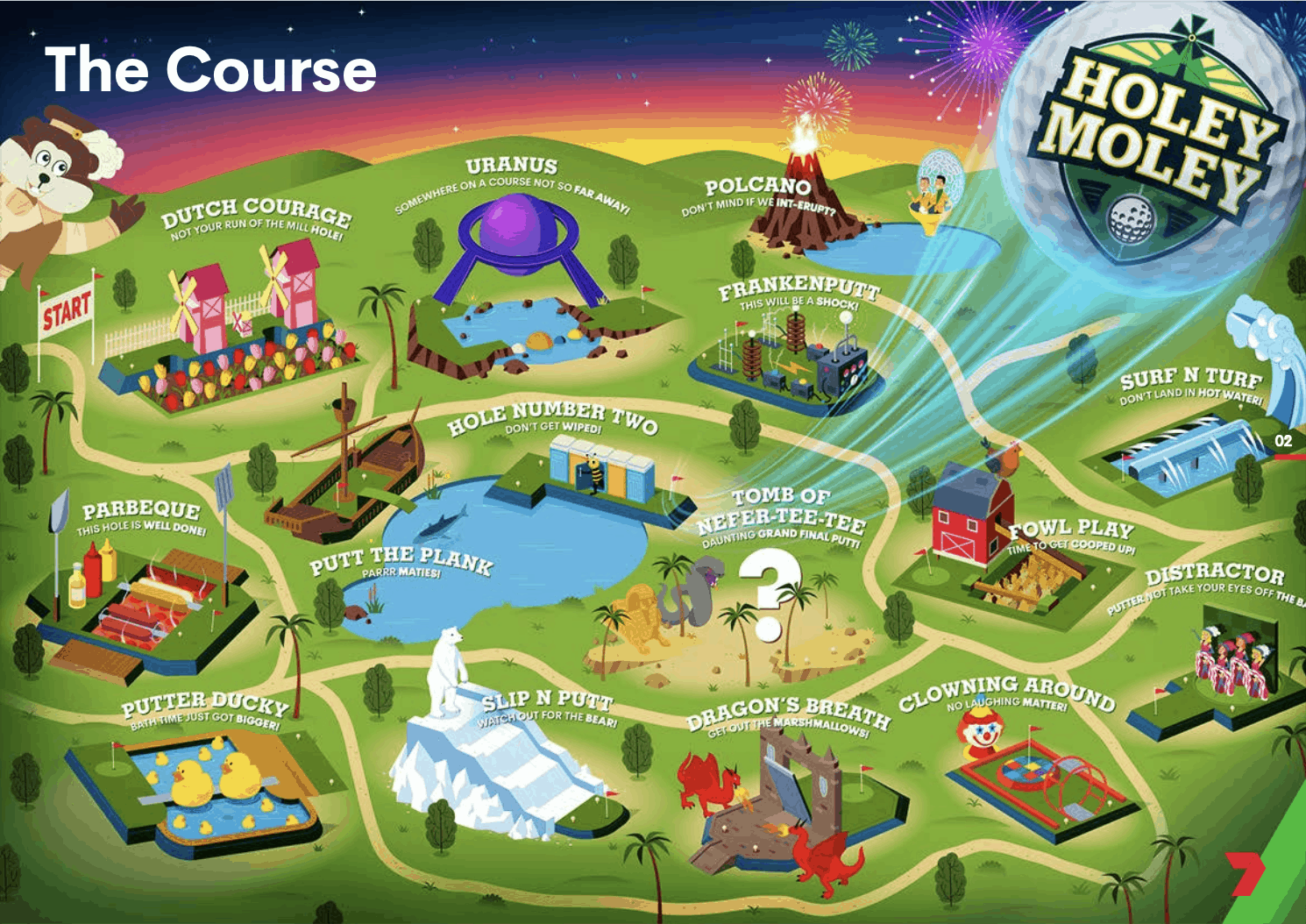 Who Are The Holey Moley Contestants?

The contestants come from every walk of life. Some of the players currently play golf professionally – like Montanna Strauss, Kristalle Blum, and Becky Kay. Others used to play professionally, like Jasmine Finlay and James Carr.

However, most people on the course are a mix of people who love just love to play golf. Some own golf clubs, some are weekend warriors, and some are people who just want to give it a crack. As Brie, a 24-year-old contestant who manages a golf club says: “Just bash it!” is my usual style of play, both on a golf and mini golf course. I do try to use a bit of physics to see if I can use my trick shot knowledge to pull off some of the “hero” shots. But generally, I just hit and hope! 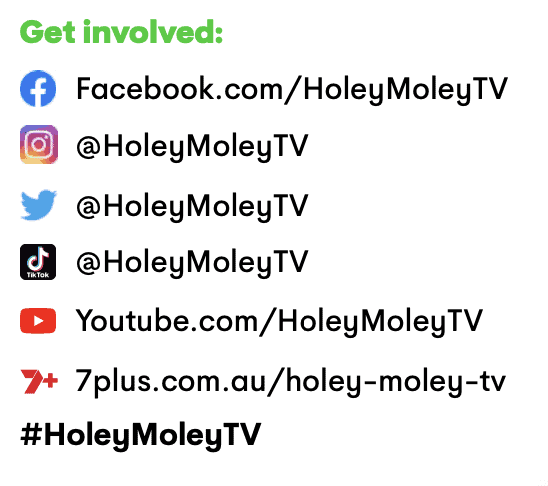 The full lineup of contestants will be seen when Holey Moley premieres 7.30pm Monday, February 1, on Channel Seven. It airs three