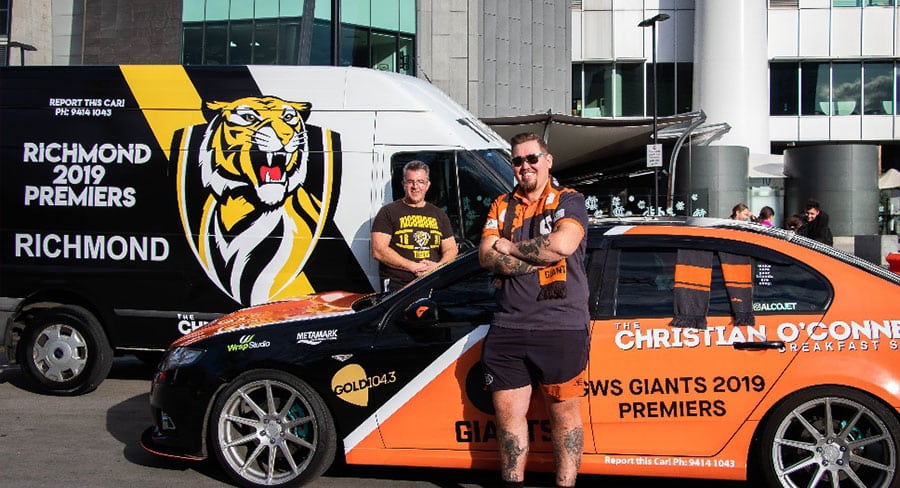 • The two men proved their dedication when they called into Gold 104.3’s Christian O’Connell Breakfast Show earlier this week

Melbourne’s biggest Tigers fan, Stratos Antinou from Meadow Heights, and biggest Giants fan, Kieran Grey from Hallam, are about as bold as they come, with the two men agreeing to a proposal from Gold’s Christian O’Connell to wrap every single panel of their cars in their teams colours, with a message declaring them as the Premiers, and driving around Melbourne… before the Grand Final was decided!

The catch is – the owner of the losing team’s car is stuck with his car wrapped for at least a week after the Grand Final – opening him up to all kinds of bizarre reactions as he goes about his daily life in Melbourne post-finals.

The two men proved their dedication when they called into Gold 104.3’s Christian O’Connell Breakfast Show earlier this week, as it reached out to listeners to find the Tigers and Giants fan willing to Put Your Colours Where Your Car Is and go where no one else would go for their team. Stratos and Kieran were the clear winners.

Stratos’ and Kieran’s vehicles were taken away for 24 hours to be wrapped by Wrap Studio and Metamark, and returned to them last night.

Stratos and Kieran had the opportunity to drive their newly wrapped cars down to Nine’s Live Grand Final Footy Show broadcast from Rod Laver Arena, doing a few laps to the amazement of onlookers, and giving the Gold breakfast show some wonderful exposure.