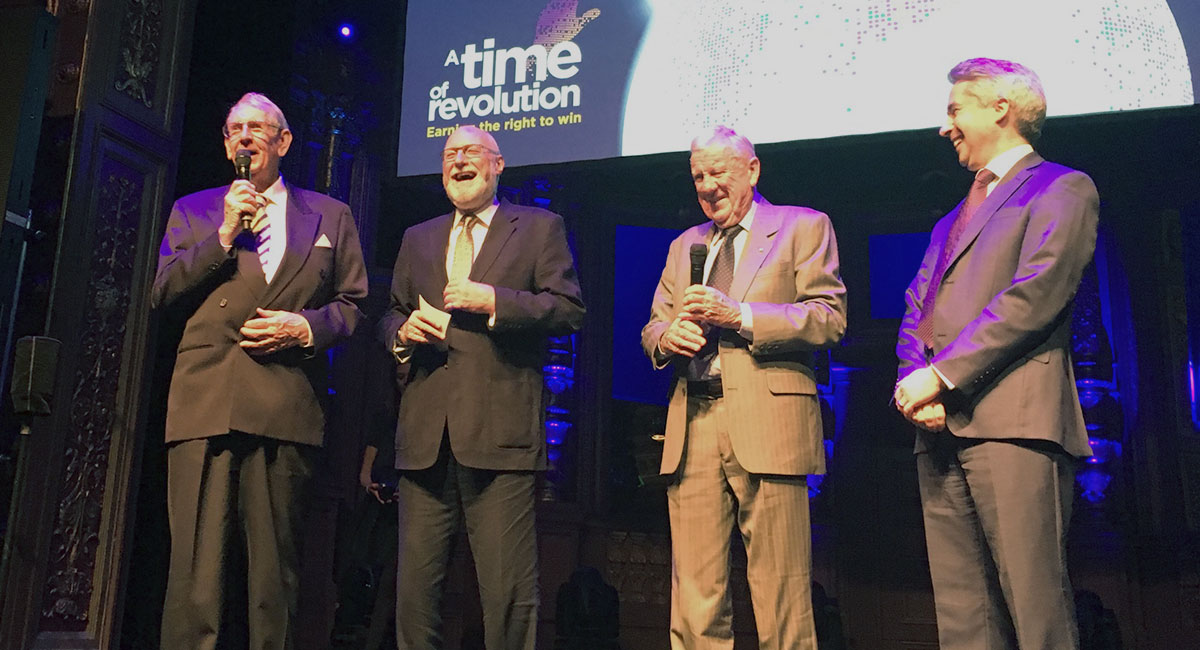 Plus he reveals the goa board is about to decline another takeover offer!

There is something about working in outdoor that makes people want to just keep going. Take goa’s co-founder Mike Tyquin for instance. He’s 79 and has just returned from the FEPE worldwide association of outdoor advertising companies conference in Stockholm after getting just a week’s warning that they would like him to attend. Mike and his brother Brian Tyquin, who runs a totally separate NSW-based outdoor business called Outdoor Systems, were recipients of the FEPE Lifetime Achievement Award.

When the brothers went onstage to receive the honour, delegates gave the Tyquins a standing ovation. “It was a bit embarrassing,” Mike admitted to Mediaweek.

Although he goes to work regularly, Mike admits age has slowed him a little. He now works three or four half days a week with his wife, also the business’s financial director, but admits that can easily turn into a full day if he takes his eye off the clock. Helping with his health is a swim before work most days.

Goa is now run by Tyquin’s three sons with father Mike the chairman. Sons Chris and John are the goa joint managing directors. Mike explained Chris looks after approvals for sites with councils and is a driving force at the business. John looks after sales while the youngest son Peter is the production director. “They all get on well,” said their dad and chairman.

As to the origins of the business, Mike told Mediaweek: “In 1959 I bought a very rundown poster company for about £1,500. We sold that in 1970 to the London and Provincial Poster Group which was then partly owned by Reed.”

Reed said its plan was to amalgamate many of what were then about 10-15 family-owned poster companies. The company that swallowed up a lot of the smaller business became Australian Posters. That business had a number of owners before it eventually morphed into APN. (That’s a long story told quickly – apologies for the lack of detail.)

Meanwhile Mike started goa in a shed in Bowen Hills in 1983. Over the years goa has remained proudly independent, with Mike telling Mediaweek he has never been tempted to sell the business. “I was a director of a company called Metrospace. I resigned from the board because of possible conflict of interest, but we continued to hold 37% of the business. We sold that last year to APN Outdoor for $20m.”

Mike said goa continues to get occasional approaches from potential acquirers. “There is an approach on at the moment which we will be declining. People come sniffing around from time to time.

“As a family company with nearly 40 employees I feel we would be letting the staff down if we sell from underneath them. That may change in years to come, but that is the current thinking.”

Outdoor is the hottest category in advertising at present, said Mike. “Goa was the first company in Australia with digital signs in 2008. We also built the first single pole signs in the 1970s when we convinced the city fathers that we should have signs over 15 feet high.”

Asked about a sector outlook, Mike said he thought growth would continue to be strong. There was no chance of companies running out of sites to digitise in the short term. He did warn though: “One of the dangers could be companies who build digital signs in less favourable places – category two locations. That threatens devaluing digital signage. You need to be very selective where you put them.

“We continue to take a lot of share off other media.”

Like other players goa has an aggressive digital rollout plan. “We would like to have 9-10 new digital sites operating this year. We continue to lead the market with digital sites in Brisbane by a long way.”

As to the possibility of listing goa on the ASX, Mike said: “I have a good mate I swim with who is a broker and wants us to list. I don’t think we are big enough. He thinks we are and tells me we are the flavour of the month.”

goa was one of the outdoor companies agitating against the proposed oOh!media/APN Outdoor merger. “The combination of the two would have controlled close to 80% of the Queensland market.” To get to that amount, Mike said he was counting the businesses where oOh!media also worked as a sales agent. As to their chances of having another crack at merging later, Mike added: “I think it is dead. They were told pretty bluntly by Simms [the ACCC] that it wasn’t on.”