A Galaxy Research study into consumer trust in content and advertising across 10 media channels has found a direct correlation between the two, with ads in news media ranked as the most trusted.

The ADTRUST study, where Galaxy surveyed 2,863 Australians aged 18+, scored the various media channels on an established Ad Trust Matrix that measures trust across 20 individual elements, grouped into four key characteristics – Reliability, Usefulness, Affect and Willingness to rely on. This revealed key insights into the degree in which audiences trust the advertising and content they consume. 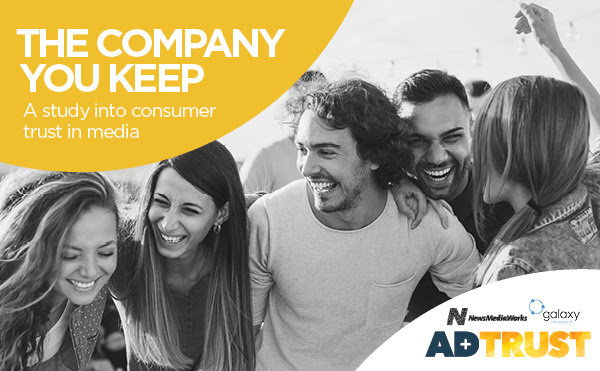 The study found that an audience’s (i.e. users of that media) trust in ads was greatest in newspapers, followed by cinema, radio, magazines and digital news media. Ads in social media were the least trusted, followed by search and any (other) websites. Digital news media was the most trusted of any digital channel.

Trust in content by users of each media was greatest for national, regional and community newspapers, followed by metro newspapers, radio, magazines and digital news media.

Social media was the only channel where more consumers mistrusted content than those who trusted it. Search and any website ranked higher for trust in content but low for trust in ads.

Further results of the ADTRUST study will be released at the INFORM News Media Summit, to be held on Wednesday September 6 at Sydney’s International Convention Centre.

The study can also be downloaded at newsmediaworks.com.au/adtrust.