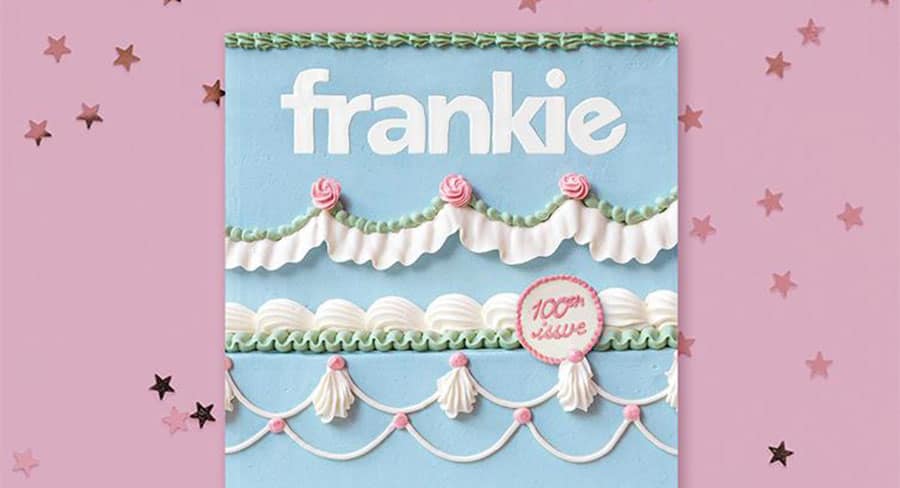 Frankie Magazine has hit the milestone of releasing its 100th issue, with a cake themed cover created by the ace April’s Baker.

The milestone issue is chock-full of the weird, wonderful, and heartwarming – the people and stories that have helped to shape frankie into the magazine readers know and love today.

Since sending the first issue to print 17 years ago, frankie has worked to shine a light on Australian and New Zealand creatives. The magazine is proud to have played a part in the journey and growth of thousands of local talents: fashion designers, crafters, painters, illustrators, writers, photographers, and fledgling small businesses. It has also connected readers with like-minded advertisers whose brand stories are shared through unique print and digital partnerships.

Reflecting on the launch of issue 100, frankie editor Sophie Kalagas says, “It’s a huge milestone that we’re so proud to have reached – and it’s especially heartwarming to see the community that has grown and come along with us. frankie is a much-loved magazine, but it’s also diaries and calendars, stationery, podcasts, one-off publications, events, a wonderful website and a highly engaged social platform. Our readers are supportive, creative and loyal, and it’s such a joy to hear how much frankie means to them, too.”

The occasion wasn’t able to be maked in person due to pandemic restrictions, but, some of the frankie team did get together to create a 100th issue video, which is available via a QR code inside the new issue.

Frankie will also be celebrating its 100th birthday with a raffle and a series of ‘chinwags with the editor’ – a chance to catch up with some familiar faces from frankie’s pages via Instagram Live.

The team behind frankie say that they’re most excited about the chance to do it all again, and that they look forward to showcasing more young creatives, new makers and local talents inside another 100 issues.