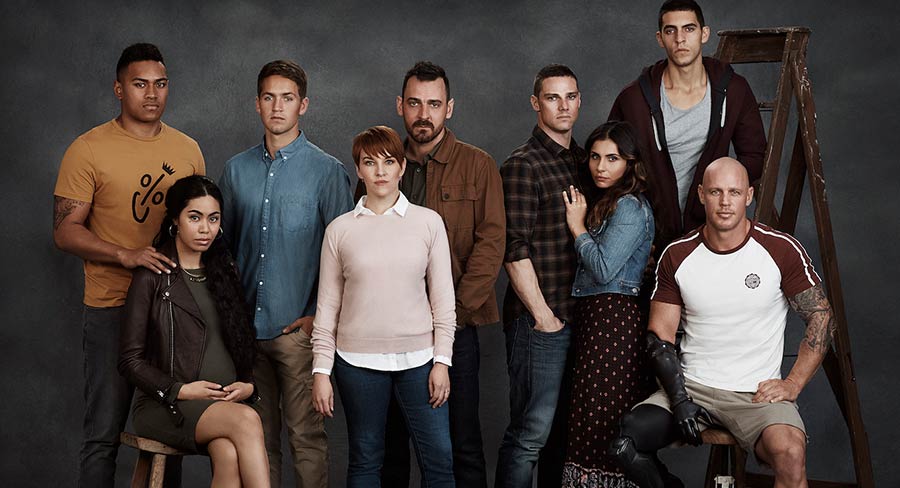 Foxtel held a launch function for its latest Foxtel Original Fighting Season this week hosted by director of publicity and talent Jamie Campbell in the absence of director of television Brian Walsh. Campbell interviewed both producer Kylie Du Fresne and writer Blake Ayshford and introduced key cast members to media from around Auastralia.

The new series launches on Fox Showcase tonight and is then available On Demand.

The talented ensemble cast for Fighting Season was assembled early last year after the subscription TV platform first announced the commission in November 2016. Producer Goalpost Pictures started shooting in May 2017, with major attraction Ewen Leslie signing on just before that start date.

Leslie seems to have been in many major Australian drama series in recent times. “I’m not sure that is good or bad,” he grimaced, thinking about the effect it could have on employment.

He’s also been in The Cry (BBC and coming to ABC in 2019), Safe Harbour, Top Of The Lake 2 and had a recurring role in Rake.

“I am lucky that a number of producers I have admired for many years have been knocking on my door, which has given me the chance to work with some really wonderful people,” he told Mediaweek.

There is a pretty big spoiler that is hard to avoid when you talk with Leslie about his role as an Australian soldier, but he said the plot certainly got his attention when he started the script.

“Writer Blake Ayshford has structured it very well and you are getting small pieces of my character as the series progresses. Each piece builds the character until viewers get to the final episode when it all comes together.”

He is very happy with the finished product: “Blake is a really good writer and Kate Woods is a great director. It really felt like a story worth telling, which you can’t really say about everything.”

Woods is the Australian director of Looking For Alibrandi who is now much in demand for TV series in the US.

Leslie comes from West Australia and he previously worked on Goalpost’s Logie-winning Nine series Lockie Leonard, a series based on books by Tim Winton. Leslie noted he lived on the same street as Tim Winton and the part he played is based on one of his father’s good friends.

One of Leslie’s more memorable recent roles was as Nicole Kidman’s estranged husband in Top Of The Lake 2. “To get to work with Jane Campion was amazing and to play Nicole Kidman’s husband and work on those scripts was not an opportunity I foresaw. I was thrilled to be part of it and I learnt a lot working with lots of strong, talented women at the top of their game.”

In addition to the forthcoming The Cry, Leslie has a small role in a movie called The Nightingale. The film was recently screened for director Jennifer Kent at the Venice Film Festival.

After an avalanche of recent work, there is not a lot on right now.

“Are you available if anyone asks?” we checked.

“All this stuff comes out now while I am unemployed. People are probably thinking I am working all the time. I haven’t worked in months!”

While Leslie hasn’t worked internationally, he points out The Cry is a UK production.

“With Jenna Coleman we shot in Melbourne and Glasgow.”

Leslie explained how that job was part of a package deal. “The producers saw Safe Harbour and wanted to hire that director Glendyn Ivin. They also wanted me and the director of photography. I would like to do more stuff overseas.”