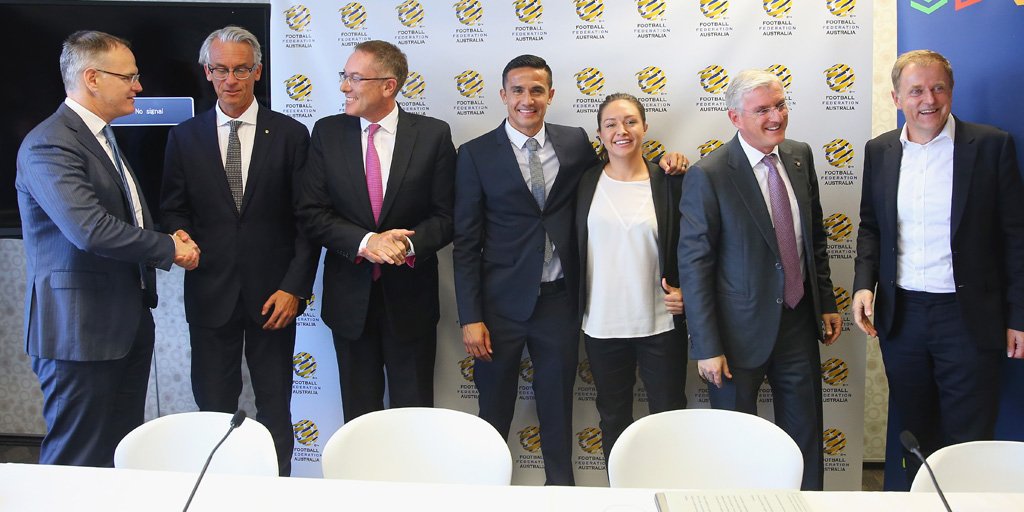 This is how the FFA reported the new deal on Tuesday:
The new six year agreement with partners Fox Sports, Foxtel and News Corp Australia will provide football fans with comprehensive, world-class coverage on multiple platforms, including subscription TV, internet and digital devices.
Foxtel and Fox Sports will continue to broadcast all Hyundai A-League games live on Foxtel TV, Foxtel Go & Foxtel Play services as well as Socceroos, Matildas, W-League and FFA Cup matches as they are currently shown today.
And, in a separate deal to be negotiated in the new year, for the first time ever a Hyundai A-League match will be also shown live on free to air television in prime time on Saturday nights.

Commencing on July 1, 2017, the new deal totals $346 million which on a like for like comparison is more than double the current arrangements. It excludes the rights to final round Socceroos World Cup qualifying matches, the Asian Cup and the Asian Champions League which are controlled by the Asian Football Confederation and separately owned by Fox Sports and Foxtel. FFA expects to make an announcement regarding free to air television, radio and international rights in the first half of next year.

FFA Chairman, Steven Lowy, said the new deal represented a “quantum leap” for football in Australia. “Since the transformation of our game began back in 2003, the change in football has been remarkable,” he said.
“Football has always been the World Game but it is now also entrenched as a mainstream Australian sport, with deep connections to Asia, the fastest-growing region in the world. “Our game has never seen a deal of this magnitude before. This six-year agreement gives us the certainty to continue to implement our strategy to grow the Hyundai A-League and the Westfield W-League and invest more in grassroots football development and the women’s game.
“It also allows us to continue football’s highly successful partnership with Fox Sports, which dates back to 2005. The reach of Fox Sports, Foxtel and News Corp Australia is unrivalled in Australia. They are the perfect partners to promote football which is the world’s biggest sport and the biggest participation sport in this country.”

FFA Chief Executive David Gallop said $3 million a season would be allocated to attracting more marquee players like Tim Cahill to the Hyundai A-League. “We have seen the enormous impact that our current marketing and marquee player strategies are having,” he said.
“This year TV audiences, crowds and club memberships are all up and it is our intention to re-double our efforts in these areas under the new deal.
“The new arrangements will benefit all areas of football in Australia, but in particular the A-League clubs and players who will receive additional funding as a result of today’s announcement.”

Foxtel CEO Peter Tonagh said: “Foxtel is thrilled to be continuing our long standing partnership with FFA.
“This doubling of our investment provides the long term support to further grow the game at both an elite and grassroots level. We strongly believe in football and know our customers share the passion and love for the game as we do.
“I am also pleased to confirm that this new agreement continues our commitment to promoting the game at a grass-roots level, partly through initiatives such as Foxtel All-Stars Tim Cahill Ambitions program.”

Fox Sports CEO, Patrick Delany, said: “Today’s announcement sees Fox Sports remain the home of football in Australia. We have been there from the beginning, and have walked the hard yards, and we will be there to see Australian football reach its full potential. For us it’s a celebration.
“We will serve up more football, across more platforms, live, ad break free during play and in high definition. The way it should be.
“Today’s deal sees Fox Sports home to every major Australian football code until 2020. That’s your team, every round live, no compromises.”