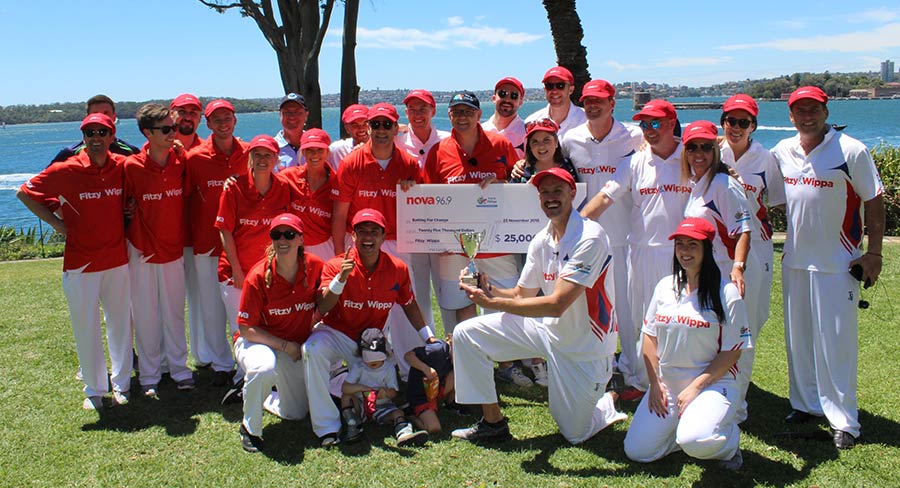 • An impressive $25,000 was raised for charity Batting For Change

Nova 96.9’s Fitzy & Wippa dressed in cricket whites to go head-to-head in a charity game of backyard cricket at the PM’s house.

Kirribilli House was the location for a very special game of backyard cricket on Friday November 23.

“A backyard cricket game, with some the best players in the world set against the most iconic view in Australia – howzat!” said the Sydney Nova breakfast hosts. Prime Minister Scott Morrison was part of the action and said, “We play cricket with countries all around the world who are less fortunate. Sport is a great way for people to get involved. This charity helps women in countries like Sri Lanka for example. It is tremendous.”

Fitzy & Wippa’s Charity Backyard Cricket Game donated $5,000 per wicket, for the first five wickets, to Batting For Change, a charity that combines the Sydney Sixers with the generosity of Australians to assist the education of disadvantaged women in cricket-playing nations. The prime minister was joined by former cricketers Brett Lee and Ed Cowan, as well as Karl Stefanovic, Guy Sebastian, Mel McLaughlin, Sam Frost, Tom Williams and Wippa’s mum (Christine) all of them in whites for the legendary match (full team listings below).

An impressive $25,000 was raised for charity Batting For Change, helping disadvantaged women in other cricket-playing Nations.

Vital stats from the charity match:

Wippa and the PM started bowling with ScoMo scoring four runs but getting bowled out by cricket legend Brett Lee.

The PM bowled Karl Stefanovic out with Karl scoring 18 (the most for Fitzy’s team).

ScoMo also managed to bowl both Fitzy and Christine Wipfli.

Guy Sebastian managed to score 32 not out and was awarded man of the match despite being on the losing team.