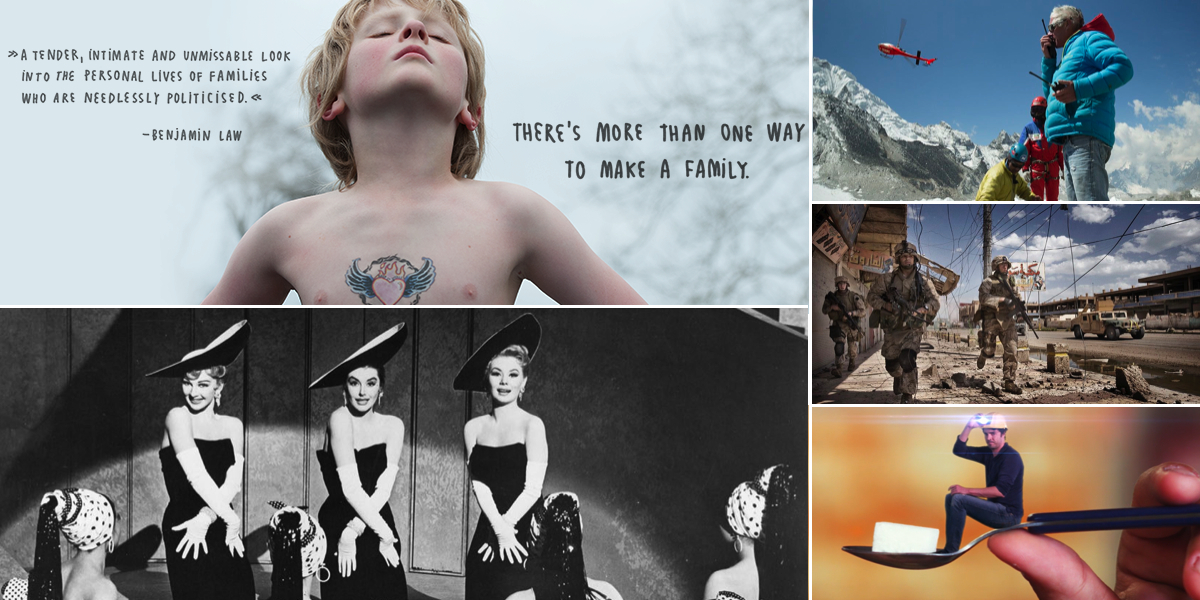 The countdown to Australia’s top screen Awards has officially commenced, with the first nominees for the 5th Australian Academy of Cinema and Television Arts (AACTA) Awards announced today.

In yet another exceptional year for Australian documentaries, this year AACTA has announced five nominees for Best Feature Length Documentary, with emerging filmmakers vying for an AACTA Award alongside industry icons.
Gayby Baby (directed by Maya Newell) follows the lives of four children growing up with same-sex parents, and approaches issues faced in modern social politics. The film screened recently at the Sydney Film Festival, where it was voted the runner-up for the Audience Award.

Confronting war documentary Only the Dead was also acknowledged at the Sydney Film Festival, taking out the Documentary Australia Foundation Award for Australian Documentary. Only the Dead features a compilation of footage recorded by Australian war correspondent Michael Ware throughout his assignment in Iraq, and was co-directed by Ware and Oscar-winner Bill Guttentag.

This year’s Best Short Animation nominees have screened at a host of short film festivals, in Australia and abroad.

Ernie Biscuit, Adam Elliot’s short film follow up to his Oscar-winning claymation Harvie Krumpet, screened as part of this year’s Sydney Film Festival. Actor John Flaus narrates the animation, following his previous voice work on Elliot’s Mary & Max and Harvie Krumpet. Elliot has 35 award wins to his name, including two AFI Awards for Best Short Animation, which he won in 2000 and 2003.

The Meek and The Orchestra are both currently screening as part of Anima Mundi, the International Animation Festival of Brazil. Narrated by television personality Myf Warhurst, The Meek explores feelings of hope, loneliness, devotion and strength alongside a beautiful score by The Cat Empire‘s Ollie McGill. Fresh from taking out the audience-voted Best Australian Animation Award at the Melbourne International Animation Festival, The Orchestra paints a picture of a world where a band of tiny musicians play a soundtrack for your life.

Narrated by New Zealand actor Mark Hadlow (The Hobbit trilogy), The Story of Percival Pilts is a whimsical adventure about living an impractical life based on a childhood promise. The animated short was the winner of Best Animation at this year’s St Kilda Film Festival and a Sydney Film Festival Dendy Awards for Australian Short Films Finalist.

In a true reflection of a strong year in Australian short film, three of the nominated short fiction films feature past AACTA Award winners.

AACTA Award-winner Kat Stewart (Offspring) stars in Flat Daddy, which explores the emotional upheaval experienced by a mother and daughter living with a cardboard cutout of her husband, an Australian military officer. The film is based on a short story written by Louise D’Arcy, which won The Age Short Story Award in 2010. Flat Daddy was nominated for Best Director and Best Original Score at this year’s St Kilda Film Festival.

Themes of Indigenous culture are explored in two of the nominated short films, Karroyul and Nulla Nulla. Winner of Best Achievement in Indigenous Film at St Kilda Film Festival earlier this year, Karroyul follows a young girl’s journey of connecting to her ancestral home after the death of her mother. Filmmakers include AACTA Award-winning sound mixers Ric Curtain and Glenn Martin, and composer Ash Gibson Greig.

Nominees in all categories announced today will screen during the 5th AACTA Awards Screenings in Sydney at Event Cinemas, Bondi Junction, and at Cinema Nova in Melbourne throughout September and October, and online via AACTA TV, exclusively for AFI and AACTA members. Also screening will be a number of the Feature Films In Competition, which will be announced in late August.

“Each year it’s a pleasure to see emerging talent on the rise via our short film nominations, and this year is no exception, with a number of nominees already making their mark on the festival circuit.

“Audiences at home and abroad continue to show high demand for Australian and global stories as told via documentaries, and this year’s nominees acknowledge this with Sherpa, Women He’s Undressed, That Sugar Film, Gayby Baby and Only the Dead.

“AACTA takes pride in making these outstanding productions accessible to the public and industry during our dedicated 5th AACTA Awards Screenings program, which complements our year-round Members’ Events program. Already this year more than 3,400 people have seen great Australian film, television premieres and documentaries via our screen culture and industry development program, and more are signing up to hear first-hand from our talented industry as part of our exclusive cast and crew Q&As.

“On behalf of AACTA, I congratulate all nominees and look forward to a robust competition as the countdown to the 5th AACTA Awards in Sydney officially begins.”

The AACTA Awards are proudly supported by the New South Wales Government through its tourism and major events agency, Destination NSW.

The 5th AACTA Awards will be held in Sydney on 9 December 2015 at The Star.