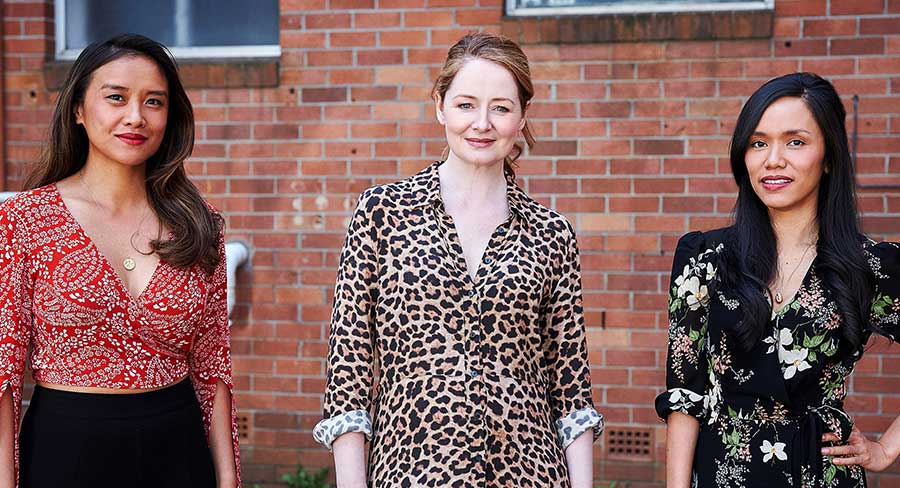 • The Unusual Suspects is an Aquarius Films production for SBS

Produced by Aquarius Films, the four-part heist caper is a tale of female friendship and empowerment set in Sydney’s Eastern Suburbs. When a $10 million necklace is taken in an elaborate heist, women from vastly different walks of life come together to ensure justice is served. The Unusual Suspects champions strong female characters and marks the first major representation of Filipino-Australians on Australian TV.

Aina Dumlao said: “Having the opportunity to work with Filipinos both in-front-of and behind-the-camera – all while collaborating alongside a powerhouse cast and amazing filmmakers – is nothing short of pure joy for me. And the fact that The Unusual Suspects is also telling the story of my own family’s struggles, in addition to countless other overseas workers, just humbles me. It’s refreshing to see so many well-drawn female roles with depth and complexity in the one production and we look forward to bringing these amazing women to life.”

Michelle Vergara Moore said: “My inspirational parents, José and Rustica, immigrated from Pulilan, Philippines to Australia in 1975 with the dream of a wonderful new life for them and their 10 children. Today, over 290,0001 Filipino-born people also call Australia home. I hope I can do them, my parents and other Filipino immigrants proud with this empowering and captivating fire-cracker of a series. In my lifetime, I never imagined that a series depicting such an important part of the Filipino-Australian immigrant experience would be portrayed…and to be a part of it – I’m just chuffed! Kudos to the entire team for believing that this narrative needs to be shared, and I can’t wait for this highly-entertaining story to resonate with audiences around the world.”

Miranda Otto said: “I’m excited to return to Sydney to join Aina and Michelle in this outrageously funny series with fierce female friendships at its core. I’m honoured to be working with Aina, Michelle, Vonne Patiag, Melvin Montalban and the other Filipino creatives to tell a truly original and incredibly diverse narrative and look forward to collaborating with SBS, who do such amazing work telling Australian stories.”

The series is being produced by award-winning filmmaking duo Angie Fielder and Polly Staniford, whose recent credits include Lion, nominated for six Academy Awards and four Golden Globe Awards as well as Berlin Syndrome, Dirt Music, The Other Guy and The Unlisted. Vonne Patiag (Halal Gurls) joins them as Associate Producer.

The Unusual Suspects is an Aquarius Films production for SBS with major production investment from Screen Australia in association with Screen NSW and About Premium Content, which also handles international distribution. The series is financed with support from Cutting Edge.