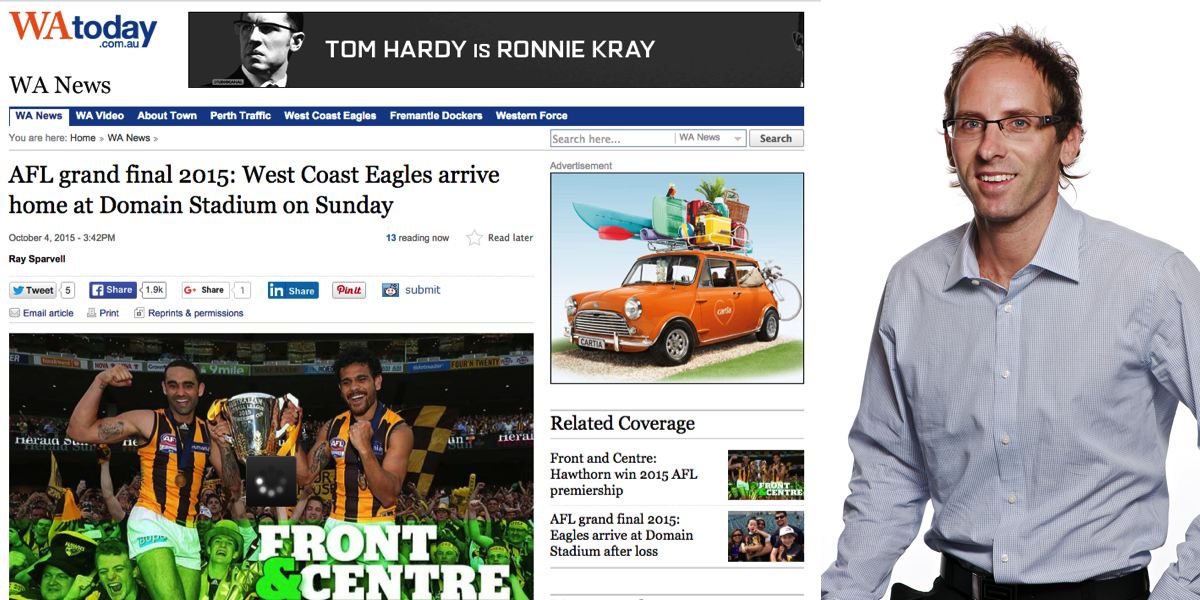 New WA Today editor Simon White: “It’s no secret to say we are going to have a heavy focus on social media”

Fairfax Media-owned and Perth’s sole digital-only publication WA Today quietly recruited a new editor-in-chief in the past month to lead the title to its digital glory.

Simon White has replaced the former editor-in-chief Allen Newton. Currently the title has a staff of 11.

“If you’d asked me 13 years ago would I be the editor of a website in 13 years’ time, I probably would’ve wondered if there were editors at a website,” White told Mediaweek.

Coincidentally, White’s appointment came at a high time for the locality with the West Coast Eagles in the AFL Grand Final against Hawthorn. Speaking on how he thought this impacted traffic on the weekend of October 3, he said an Eagles victory would have been a better result.

A large part of White’s conversation with Mediaweek was spent on discussing the importance of social media for WAtoday to attract audience and increase brand awareness.

“It’s no secret to say we are going to have a heavy focus on social media here. That’s one of my key strategies and challenges going into the role. We had a Facebook page when I arrived at WA Today in 2011, but it was really about bells and whistles and something extra we added on to what we already did.

“Back in those days we were relying on people to come to the homepage primarily for their news, whereas now, people’s Facebook feeds have increasingly evolved into actual news feeds and that’s where they are going to get information.

“That’s a key thing for us to work on, how we can produce our stories so they fit with that and is there content we can specifically produce that appeals to social media?

“If we are going to having stories where more than half of the traffic is getting there via social media and Facebook in particular, we need to think about how we can produce those stories that best fits the needs of a social media audience.”

“In terms of readers’ interaction, one of the biggest things we have is comments on stories. We love the fact that our readers have discussions with each other and with us.

“One of the biggest things we’re learning about is videos on Facebook.

“I went to my own Facebook feed a few weeks ago and about the first 12 items on it were videos. I literally had to scroll down to find something that wasn’t a video.

“That shows how things are changing for us. It’s about what videos can we generate for Facebook that then will drive traffic back to the site.

With Seven West Media’s The West Australian publishing a newspaper Monday-Saturday and News Corp’s The Sunday Times taking over on Sundays, we asked White if WA Today was at a disadvantage by not having a print version.

“No, not at all. Digital is clearly where the industry is going.

“For me, having worked in the print background previously, it’s exciting not to have some of the legacy things associated with a print product.

“Digitally and presentation wise, it’s much more exciting to be working in the digital arena with the way you can present stories, add on to stories and embed and relate videos and sound clips – it really adds something to the stories.

“When I first started in this industry, you just had a piece of paper you were printing onto. You couldn’t interact and engage with the audience the way you can now.”

More people are accessing the WAtoday.com.au from social platforms via mobile than desktop, White revealed.

“That gives you an idea of how important [mobile] is to us. The desktop site presentation is different to our mobile site so we need to be mindful that when we have big ticket stories we have as many assets as possible up on mobile site.

“If you think about things like the lunch-time hour, and when people get home and are watching TV at night, it’s fair for us to assume that people are on their mobiles. We’re mindful that our mobile traffic will be higher at those times of the day and tailor how our site looks around that.”

Simon White kicked off his career in journalism in 2002. He initially joined WAtoday in 2011 as a sports reporter but left in 2013 to work at Curtin University, before rejoining in 2014.