5.2m news media readers holidayed abroad in the past year

Digital news media on smartphones, tablets, laptops or PCs is consumed by 70% of people, or 13m Australians. Print, however, continues to be the preferred platform for readers of news media, at 13.4m people or 72% of the population.

The emma data also shows that news media provides travel and tourism operators with a powerful opportunity to connect with holidaymakers. Readers enjoy travelling overseas, with 5.2m holidaying abroad in the last 12 months. On average, this has grown by 4.6% over each of the past three years. In addition, 5.8m news media readers intend to travel overseas on holidays in the next 12 months, which have grown by 5% in a year.

Cruising holidays in particular are showing strong growth among news media readers, with 1.9m intending to take a cruise in the next 12 months, which is an average increase of 14.6% over each of the last two years.

The Sydney Morning Herald is Australia’s highest-reaching title across all platforms with 5.5m readers. The Daily Telegraph followed, reaching 4.6m readers, and the Herald Sun on 4m (see table below). 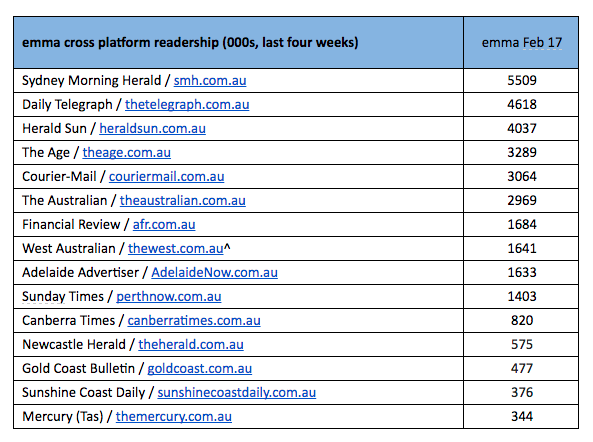