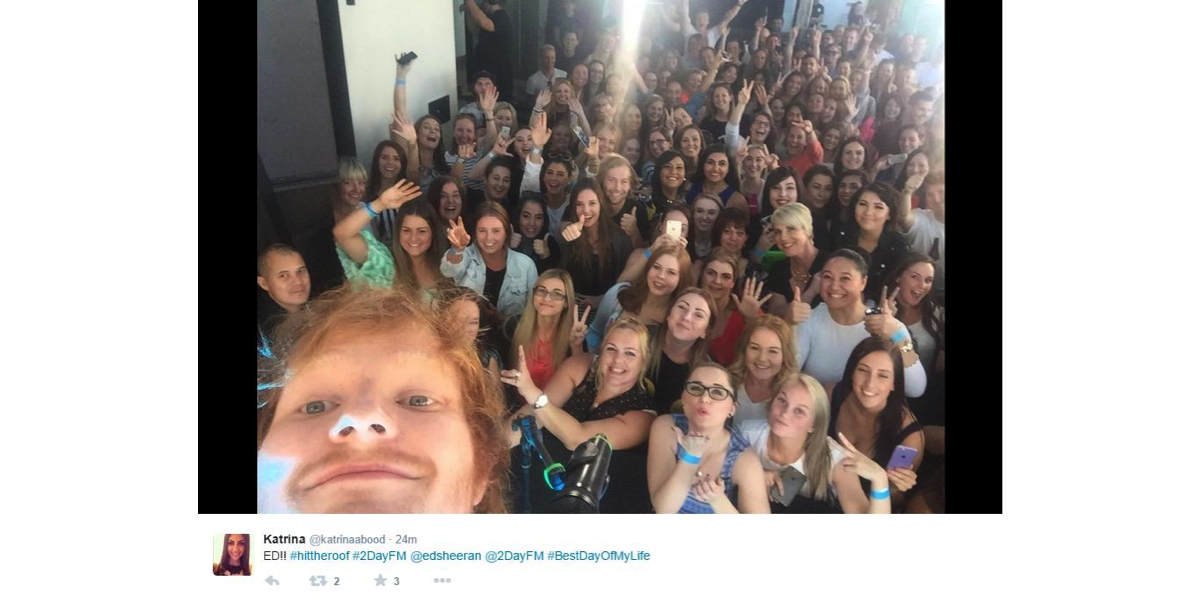 On the British man of the moment’s publicity blitz in Australia.

British man of the moment Ed Sheeran has been busy! His impressive Sydney publicity blitz included the announcement of his new record label Gingerbread with Nova’ Smallzy, and a special guest appearance at a Sydney couple’s wedding organised and paid for by KIIS FM’s Kyle & Jackie O. The video of him crashing their wedding has had over 3.5 million views since it went online last Thursday, and was covered by over 20 news outlets worldwide including CNN, NBC, Good Morning America, The Huffington Post and The Telegraph. Sheeran topped it all off with a gig for 200 listeners and clients on hit104.1 2DayFM’s World Famous Rooftop. Sheeran also released “Bloodstream” with fellow Brits Rudimental last week, and won Germany’s 2014 Echo Award for Male Rock/Pop International for his album “X”.
During his hit104.1 performance fervent fans – a number of whom were moved to tears – were treated to five of Sheeran’s hits, including “Thinking Out Loud”, “I See Fire” and “Don’t”, with a cover of Dr Dre.’s “The Next Episode” and Nina Simone‘s “Feeling Good” sneakily worked in. Pretty good for someone whose intense schedule has put him under the weather with throat issues! Sheeran also took a selfie with the crowd, prompting the owner of the phone used to burst into floods of tears.
hit104.1’s guests were treated to burgers from Neil Perry‘s Burger Project, with Perry himself showing up to serve icecream after Sheeran snuck out of the building. SCA’s brekkie team Dan, Maz and MC were all in attendance, alongside Sydney SCA GM Jeremy Simpson, content director Adam Williscroft, assistant content director Jase Allen and publicity team Stella Katsaros, Myka Hoffman and Tessa Conboy.

Photo: Ed Sheeran takes a selfie from a fan’s phone at 2Day FM’s rooftop on Friday