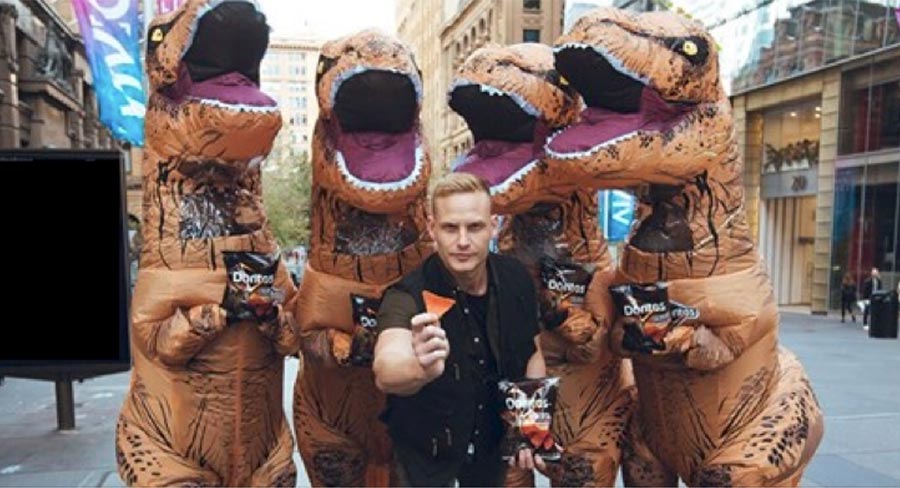 The partnership was launched last month with a flash mob of 30 dinosaurs invading Martin Place.

Daily Mail Australia has enjoyed a (pre)historic partnership with Doritos and PHD to celebrate the launch of the new Jurassic World-inspired flavours.

Daily Mail Australia was selected as Doritos’ media partner to ensure that the Doritos Jurassic World launch became an integral part of the news agenda throughout the week-long campaign period.

The partnership was launched last month with a flash mob of 30 Doritos Colossal Dinosaurs invading Martin Place, Sydney, from 8am, much to the surprised amusement of local commuters.

Ahead of the Jurassic World: Fallen Kingdom film release, the Doritos Colossal Dinosaurs were spotted all around Sydney from the early hours of the morning before congregating in Martin Place for the flash stampede. To amplify the activation Daily Mail Australia created a sponsored content breaking-news story around the stampede and produced a video in conjunction with Crater that covered the Doritos Colossal Dinosaurs’ movements throughout the day and which sat in the article.

The article, which went live straight after the flash mob, was placed in a prime position on the Daily Mail Australia homepage to ensure those who weren’t able to see the activation in person were aware of the activity.

A branded video player showed the stampede across Daily Mail Australia in a breaking-news style to reach those who didn’t engage with the article.

Daily Mail Australia posted the content across social media to its audience of 1.2million Facebook followers as well as towards a paid push targeting P16-39 across Australia. In addition it amplified the news story as an editorial imitation takeover on Snapchat to reach 321k subscribers.

The co-branded imitation editorial takeover was a media first for Daily Mail Australia where additional video content was made specifically with Snapchat’s 18-24yo audience in mind. The second part of the activation was held on Friday June 22, 2018 and that portion of the week-long event encouraged Sydneysiders to find the Doritos Colossal Dinosaurs in the city, give them a hug, and win $20 cash on the spot.

The activation was promoted in the days leading up to the event using a sponsored content article, which was also pushed out across Daily Mail Australia’s social media, as well as streaming MRECS.

Mari Steptoe, Daily Mail Australia’s project director, said, “We absolutely jumped at the chance to partner with Doritos and PHD to implement the activations and quickly create content our users would love. This campaign shows how we can execute large-scale activations while remaining true to our brand as a breaking news site.”

PHD Media’s executive group director Stephanie Douglas Neale said, “Doritos is a brand that thrives on bold outlandish advertising to make its mark in the snacks category. Together Daily Mail Australia and PHD Content have launched the new Doritos Colossal steak flavour via a stunt that’s helped create the type of content that appeals to Doritos’ young and hungry audience. Since launching, this campaign has produced outstanding results and reactions from consumers.”