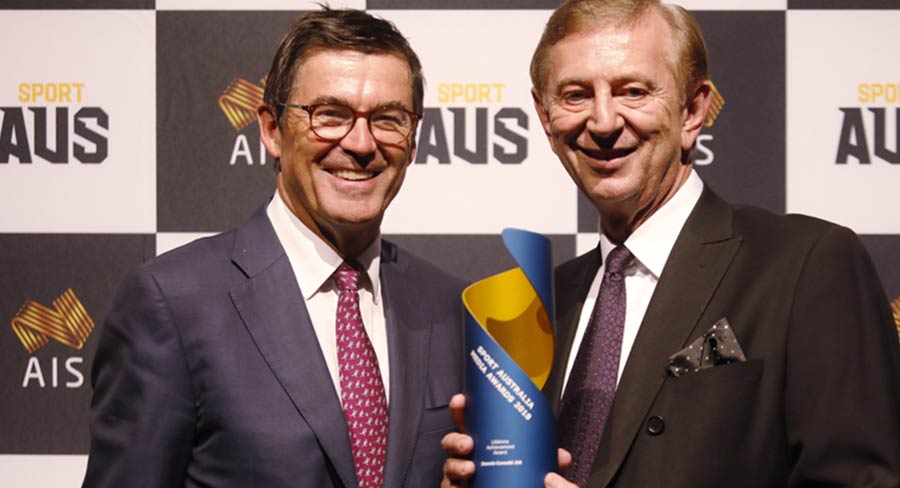 “During his career he has brought so many sporting moments to life with his insightful, quick-witted and confident commentary that has always been delivered with impeccable timing.” Cometti’s media career has spanned almost 50 years. He became the youngest broadcaster to call Test cricket for the ABC in 1973, he was the voice of Australian Olympic swimming during a golden period from 1992-2000 and he called the AFL from its inception in 1990 until his full-time retirement at the end of 2016. He continues to call AFL matches in Perth on radio and work with Channel Seven.

But of all the great moments in an illustrious media career, Cometti recalls the greatest highlight occurred in his very early days, in 1968, when he was as a radio disc jockey at a Perth rock station 6KY.

“It was a job that offered no job security at all but it was a lot of fun. The career highlight for me has been meeting my wife Velia at 6KY. She was the boss’s secretary,” Cometti quipped.

Cometti last night paid tribute to some of the great names he worked alongside, in particular his Channel Seven commentator and friend Bruce McAvaney. McAvaney, a previous recipient of Sport Australia’s Lifetime Achievement Award, was in attendance at the ceremony.

“Trust is a big thing in broadcasting and I don’t think I trusted anyone more than I trusted Bruce,” Cometti said.

“I’m honoured to receive an award like this. Obviously its recognition for myself and my family but also my employers and all the people I worked with along the way.

“My first Test match broadcast for the ABC was in 1973. I was 24. I was broadcasting alongside the likes of Keith Miller, Lindsay Hassett and Alan McGilvray. I had to pinch myself.

“I think the only qualification I had for broadcasting the swimming at three Olympics was that I had a pool in the back yard. But I was lucky, it was a golden time for Australian swimming with greats like Susie O’Neill, Kieran Perkins and Ian Thorpe. I don’t think any Australian will forget what they did.”

Best reporting of an issue in sport
• Winner: Leo Schlink, The Herald Sun