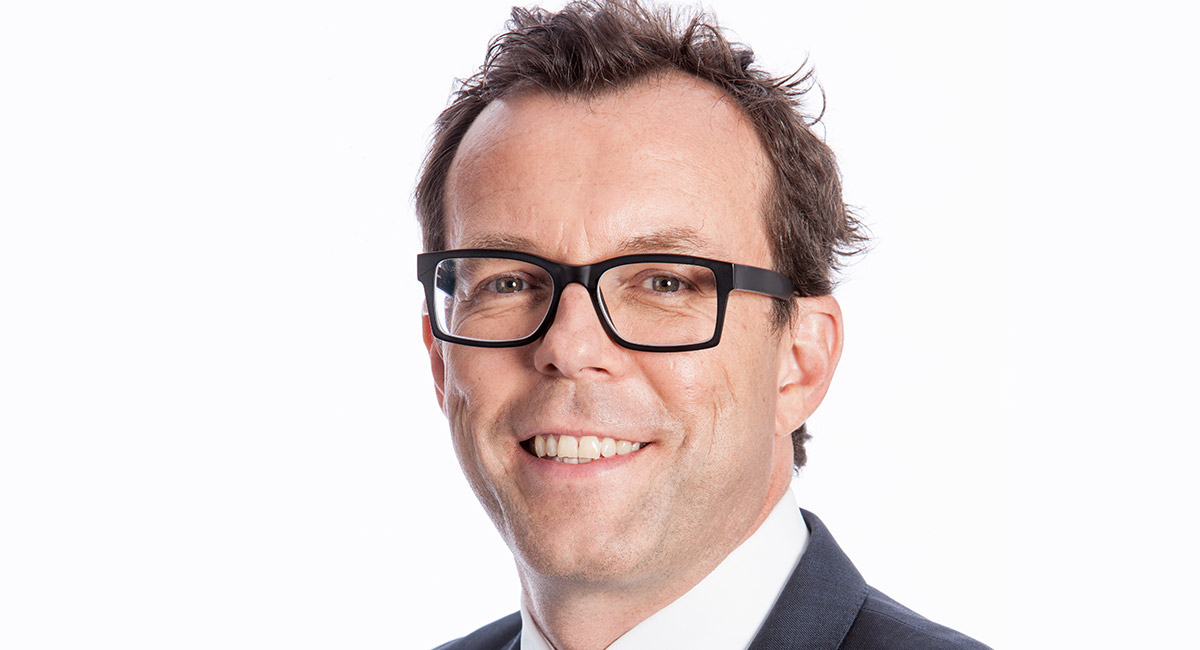 If anybody was ever going to make a splash when it entered the podcasting space it was going to be Crocmedia. The rapidly expanding Melbourne media company run by CEO Craig Hutchison and executive director Chris Giannopoulos won the AFL radio rights late last year, which moved the business into the big league.

To help manage its growing portfolio of programs and media partners the business has recently relocated to a purpose-built studio and office space in South Melbourne.

While the radio rights are clearly “the jewel in the crown” for the company, podcasting looks like being a significant contributor in years to come.

Crocmedia launched The Sounding Board in early 2016 with Craig Hutchison and Damian Barrett and it has now broadcast over 100 episodes and spawned three other spinoff podcasts – Sounding Board Questions, Hutchy’s Business of the Week and Damo’s Dish, where Damian Barrett reluctantly reveals his cooking skills with a recipe of the week.

The podcast offers listeners an insiders guide to the sports media industry, with a heavy focus, but by no means exclusive, on AFL.

The Sounding Board has attracted a major sponsorship deal too, with the alcohol industry’s DrinkWise campaign signing up.

The podcast is the most listened-to Australian original sports podcast that is not a spinoff from an existing TV or radio property.

That distinction is important for the hosts as Barrett told Mediaweek: “I didn’t want to do just an extension of what we all do on radio and TV, we wanted to make it a different platform. Although we might cringe a little at our early efforts, at least we were true to the aim of being different. 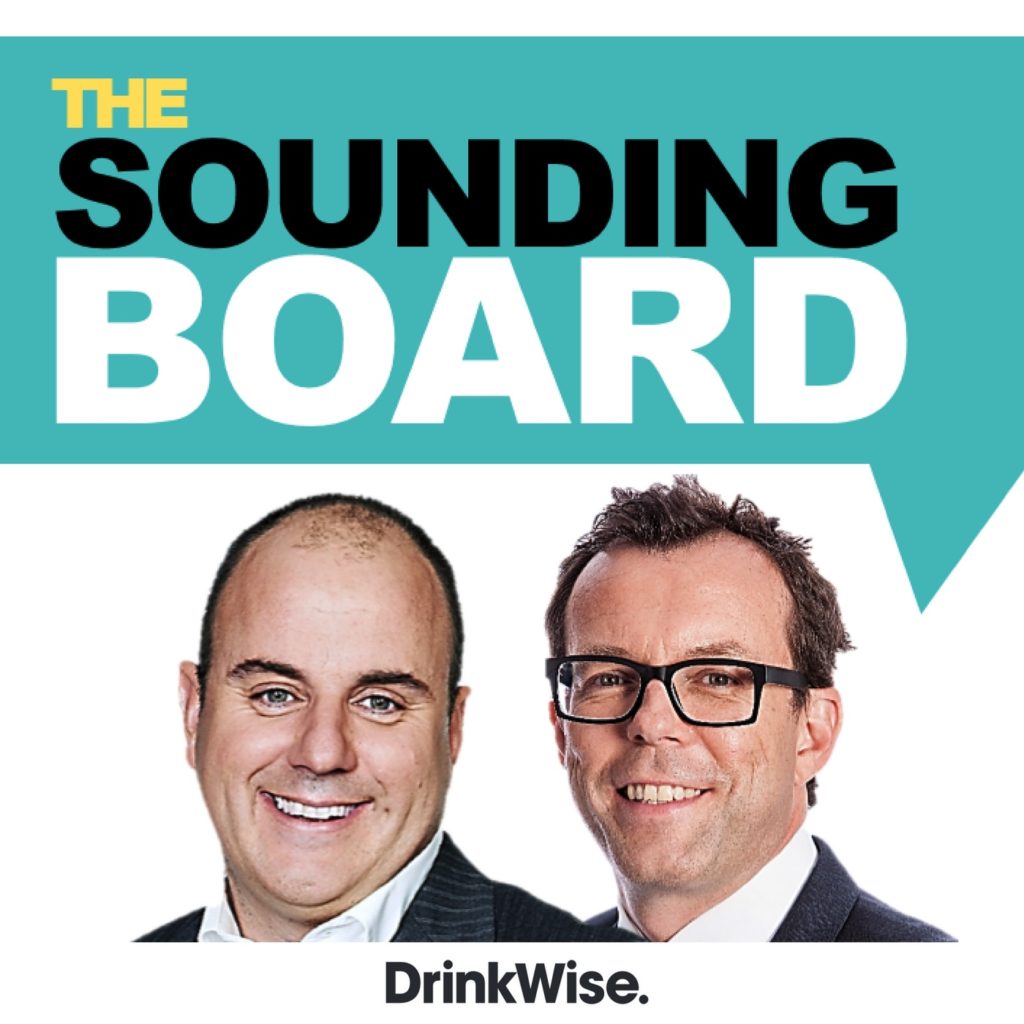 “It seems to have been generally well-embraced by media people and it sometimes surprises us by the number of people who listen to it. Going behind the scenes of the media has been our goal. We do walk a fine line though where we have to stop short of talking about some of the confidential discussion we have from time to time.”

Keeping things confidential is often out of Barrett’s hands with co-host Hutchison often more than happy to reveal the content of some chats that Barrett perhaps hoped wouldn’t be broadcast to the industry. “There have been times post-show I have asked him about things he has revealed.”

Barrett however can also surprise his co-host sometimes with reveals of what has been going on in football media. “The discussion can go somewhere we didn’t expect it to, which is probably one of its attractions for the audience.

“Hutchy has always been big on awkward moments and awkward TV and I didn’t know what he meant when I first heard it. I get it know and we try to push each other into those moments, without being nasty about it!”

Crocmedia AFL reporter Mitch Cleary produces the podcast and Barrett said he doesn’t refer to Cleary’s program notes until they are under way each week to keep things fresh. “It is unusual for anyone to get Hutchy for an hour each week, but he has managed to keep to our timetable.”

While Barrett is usually in the Crocmedia studio, Hutchison two weeks ago was in the departure lounge at JFK International Airport in New York and then last week was checking in from Perth.

The show’s audience is international with a segment about where people listen to The Sounding Board being flooded with contributions from exotic locations in all corners of the globe.

Barrett left News Corporation in 2009 after 20 years of covering sport, arriving at what was back then a much smaller Crocmedia organisation. During those years at News, Barrett worked in Sydney for a year, did three years in Brisbane on The Courier-Mail in addition to his time in Melbourne for the group, most of it on the Herald Sun.

Barrett admits he took a leap of faith in what Hutchison was offering him eight years ago. “I was very settled at the Herald Sun and it was a risk to go.” Part of his remit was to appear as the AFL news reporter on Nine’s AFL Footy Show, replacing Hutchison who stepped down to focus on his media business.

Barrett and Hutchison are now both on The Footy Show of course after Nine appointed Hutchison as co-host this year after James Brayshaw departed.

Barrett remains pleased with his career choice. “I thought I would miss the writing, but I haven’t. I just jumped in at the deep end to see where it would take me.”

Barrett hasn’t given up writing completely though – he pens two columns weekly for AFL.com.au and he is never seen out and about without his trademark notebook. He actually has every notebook he ever had which he refers to when necessary. “I am old school in that regard, I like the written word with my own scribbly handwriting that no-one could read.” Because he is not an ex-player, Barrett doesn’t comment on match strategy or how the game is playing out. “I will prod and probe and ask questions and maybe deliberately annoy people with an opinion to get others to expand on certain things. I don’t like it when someone who hasn’t played the game gets told ‘What would you know’. I realise I don’t know the game. People who think they do can be exposed for that.

“The business and the politics surrounding the game are what I focus on. That means both the players and the administrators behind the scenes.”

Asked if there is a place in sports media for journalists as well as the growing number of former players moving into media, Barrett said: “It is an interesting divide. When you talk to some ex-footballers who have been in the media for maybe 10 years they can still talk about the media derogatorily, as if they are not part of it. I don’t ever take it too seriously though. When they say that though, they tend to look down on people who haven’t played before.

“Every big-name player now seems to find his way into the media. Even Chris Judd – his parting words when he retired were, ‘You won’t see much of me.’ Now 18 months later he seems to be everywhere on radio and TV. He is excellent media talent though.”

Barrett said the money is an attraction for players heading to the media. “When some players stop earning around $800,000 to maybe $1m, a job as an assistant coach might see their earnings dropping to around $150,000. If they get the right gigs in the media they might make that much money for a few hours a week. The assistant coach might be working seven days a week for 10-12 hours a day.”

Players that Barrett expects to do well in the media when they retire include Hawthorn’s Luke Hodge and St Kilda’s Nick Riewoldt. “Patrick Dangerfield is becoming as big a media talent as he is a footballer. Nathan Buckley is as good a media talent as anybody, even while he is still a coach. “He is compelling listening. The more he is under siege the more you want to listen to him and hear what he has to say. Buckley and Dangerfield, while they remain a coach and a player, are as big as any media identity.”

Partly because of the polarising effect of Sam Newman, people seem to either love or hate Nine’s AFL Footy Show. So when a contender for its crown arrives in the timeslot it certainly drives plenty of media interest. That contender this year is Seven’s The Front Bar which has moved from after the Friday night game to 8.30pm Thursdays, up against The Footy Show.

“I like The Front Bar,” admitted Barrett. “I liked it on AFL.com.au, which is where it started, and then late on Fridays on Seven. And I wouldn’t mind it moving back there,” he added. “It has clearly presented a challenge to The Footy Show.” 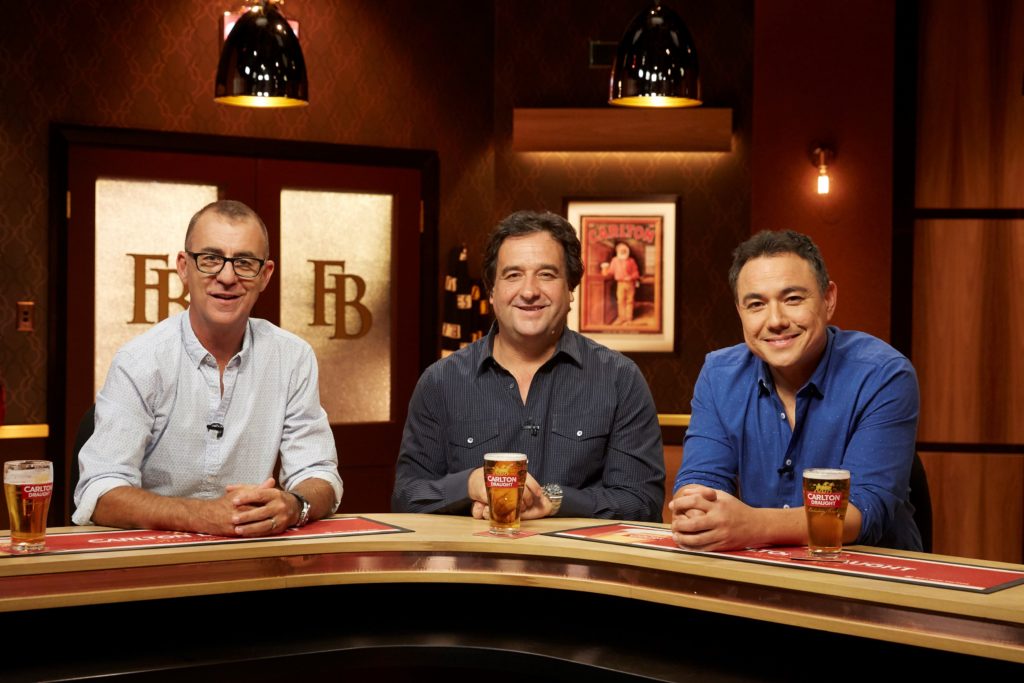 Seven’s The Front Bar with Andy, Mick and Sam

Without asking Hutchy to report on his own performance, Barrett offered the following insights on what has been a big year for the Crocmedia CEO.

“He was already pretty loaded up with commitments even before taking on The Footy Show co-hosting job. I don’t know how he does it. Even with all his different roles he has still managed to fit in one trip to New York without missing an episode of anything. He certainly seems to be handling the demands on his time. He is not bulletproof, but close to it. He is an old-fashioned dealmaker. I’ve seen him do some significant deals on a napkin in a bar.”

Thursday: AFL Footy Show (“That is where most of my stress comes from. If I put my head on the pillow on Wednesday night without knowing what my story for that week’s show is, it will be a sleepless night.”)