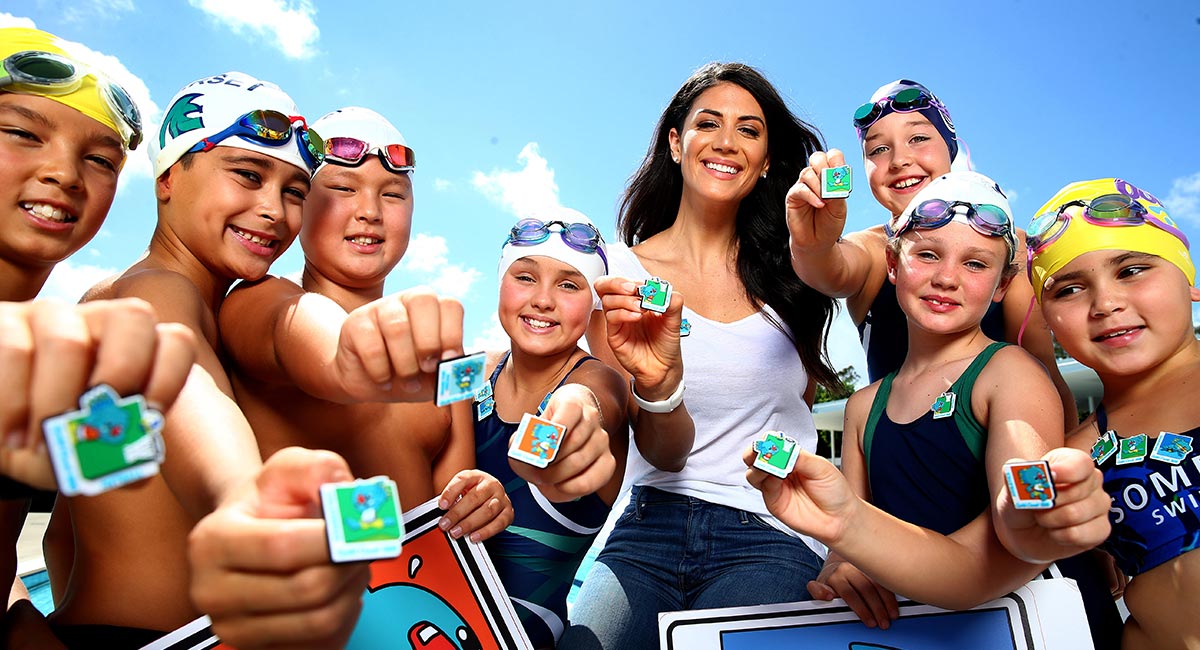 Gold Coast Bulletin editor Ben English said collecting the pins was a great way for Aussie kids to get involved in the Games and support their sporting idols.

He said this year marked the first time in the history of a major multisport event that an equal number of medal events for men and women would be held. “Our pin collection features five of the most high-profile sports and, in part, is a nod to women’s sporting achievements,” he said.

“These are among the highest participation and most popular sports played by women and girls across Australia, so it’s fitting that we’ve assembled a group of gun girls and boys to meet Steph, one of the nation’s most celebrated female swimmers who won three gold medals at the 2008 Beijing Olympics and was awarded the Medal of the Order of Australia in 2009.”

The pin collection has been endorsed by and produced in partnership with GOLDOC, whose motto for these Games is “Greater Together”.

Representing Swimming Australia, Stephanie Rice encouraged all children to collect the Commonwealth Games pins and to get behind an amazing team of local athletes.

Rice – who won gold at the Melbourne 2006 Commonwealth Games – predicted women’s efforts at the upcoming Games would captivate the nation.

“I remember how exciting it was to compete in front of a home crowd at my first Comm Games,” Rice said.

There are 22 participating newspapers in the official Commonwealth Games Pin Collection including The Courier-Mail, The Daily Telegraph, The Advertiser, the Herald Sun, Gold Coast Bulletin, Townsville Bulletin, Cairns Post and Geelong Advertiser.

The campaign is being supported by print and digital advertising across all participating mastheads, together with a social media and PR campaign.

The first pin and a free collector’s card will launch on Wednesday April 4 with five pins for readers to collect in total. Readers can collect each pin for $2 with purchase of any participating newspaper.

Each pin features Borobi, the very proud, energetic koala and the official mascot of the Gold Coast 2018 Commonwealth Games. The first pin on Day 1 encapsulates the Games’ spirit with Borobi encouraging collectors to Share the Dream.