• They were crazy days, but the proof was always in the ratings.

From 1998, many of these shows came from a street front studio in the Entertainment Quarter, Fox Studios. Back then, the place would be crawling with school kids trying to get up close with their favourite musicians. You could see bands like the Foo Fighters for free, or dance alongside US actor Jerry O’Connell in Room 208, a dance competition show that was so popular, it became the first cable show to grace the cover of The SMH’s TV Guide. 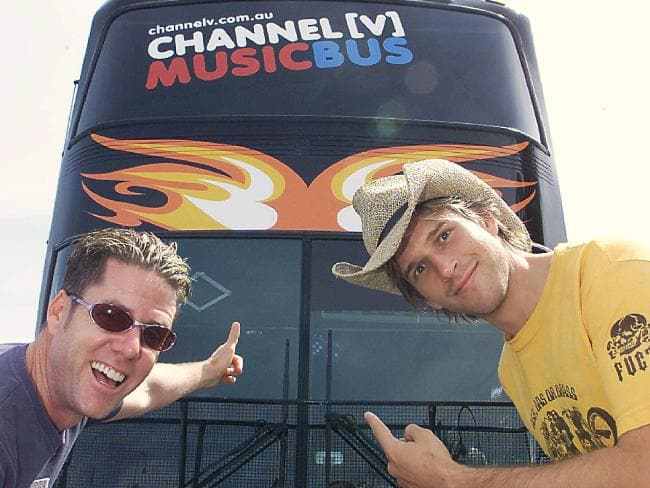 The backstory of Room 208 was interesting. Channel [V] was memorable for taking its staff away on wild conferences and Jabba and I would often share together. But fed up at everyone partying in our room, we begged for separate rooms, then stayed where we originally were. That meant everyone went crazy in the spare room across the hall, and till all hours too. The next day, despite hangovers and a lack of sleep, we workshopped a new show idea and named it after the site of our debauched shenanigans … Room 208.

None of this would have happened without Barry Chapman, our mighty boss who also thought it might be fun to hire a bus. It was. Music fans around Australia, some of whom were watching us 24/7, then got to see us in their town, with a couple of hot Aussie bands, as we travelled up and down the east coast for several summers.

They were crazy days, but the proof was always in the ratings. [V] and its sister channels always outrated the MTV channels, when they were competitors on the Optus network, and then on the same platform. Now MTV is the last one standing which proves having the more recognisable brand name is sometimes the most important thing of all.