The number of new cars on the road fitted with DAB+ broadcast digital radio has tripled in the past year, helping to lift digital radio uptake to 25.3%

The number of new cars on the road fitted with DAB+ broadcast digital radio has tripled in the past year, helping to lift digital radio uptake to 25.3% of the population in the metropolitan capital cities, according to new data released today by Commercial Radio Australia.

More than 307,500 new cars were sold with DAB+ digital radio installed in 2015, up from 98,400 a year earlier, as more vehicle manufacturers upgraded the in-car entertainment systems offered in their new models.

“Australians love listening to radio in their cars, and it remains by far the most popular entertainment choice when driving,” said Joan Warner, chief executive officer of CRA.

“As people are discovering the great sound quality of digital radio in their cars as well as the additional stations, we are hearing anecdotally that it’s having a flow-on effect on sales of digital radios for the home,” she said.

Twenty-seven percent of new vehicles sold last year were fitted with digital radio, and a range of manufacturers have announced the technology will be standard in many of their new 2016/17 range models, including the Porsche Cayenne, Toyota Prius i-Tech and Mitsubishi Pajero and Lancer.

Ms Warner said digital broadcast radio was now standard in 80% of new cars in the UK and the radio industry was reaching out to brands including Mazda and Hyundai to encourage them to start offering DAB+ in Australia.

The total number of DAB+ digital radios in Australia has now reached 2.44 million, including 460,000 in- car units, as well as portable digital radios and home receivers sold through retailers.

Meanwhile, the latest quarterly GfK DAB+ Digital Radio Report shows the number of people listening to radio via a DAB+ device has grown to 3.35 million in the five capital cities where digital radio services have been launched. This reflects an increase of 179,000 listeners since the last report issued in November 2015.

The report showed 2.47 million listeners tuned into digital broadcasts of their favourite AM and FM stations each week, and 1.40 million listened to new digital-only radio stations.

“Radio listeners have never had more choice, and new formats focusing on children’s programming, more news and sport, chill out music, 80s and 90s, and classic rock are starting to gain a following,” Ms Warner said. 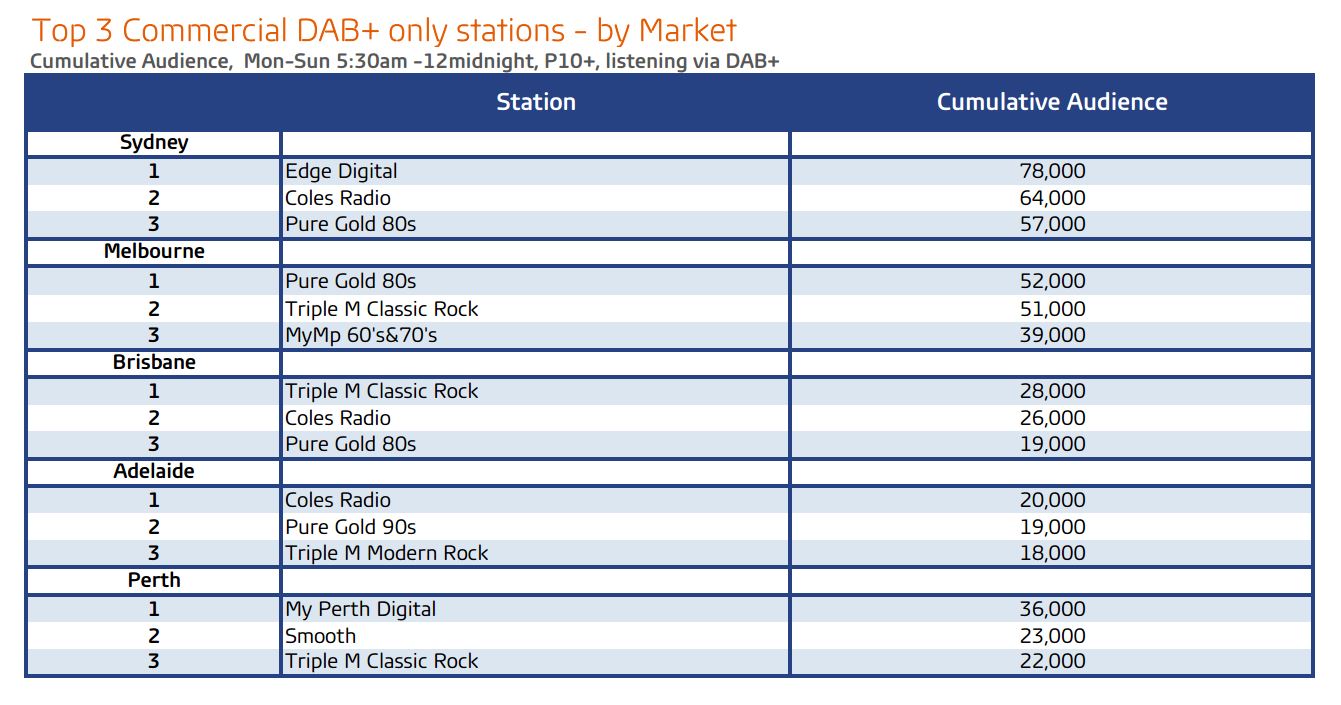 The report is based on average results recorded across GfK’s three most recent radio ratings surveys – Surveys 7 and 8, 2015 and Survey 1, 2016.

Free to air digital radio launched in Sydney, Melbourne, Brisbane, Adelaide and Perth in late 2009, and trial services are on air in Canberra and Darwin. Listeners can enjoy up to 30 new digital-only stations in each market, including pop-up stations focused on events or seasons.