Commercial radio stations in the metropolitan capitals have signalled their intention to start focusing on sales for DAB+ only stations, with the announcement of DAB+ digital only station listener numbers released today by GfK in a DAB+ Digital Radio Report.

The report is an average of results from surveys 2, 3, and 4 this year and shows the total DAB+ audience is now at a high of nearly 3.2 million people (3,164,000) across the five state metropolitan cities. The extra DAB+ only stations have attracted 1.36 million listeners each week in the five capital cities of Sydney, Melbourne, Adelaide, Brisbane and Perth.

This is in addition to the more than 2.2 million listeners who listen via DAB+ to their favourite AM/FM stations. Overall, 24.1% of the population in the metropolitan capitals are now listening to local radio via DAB+ digital radio broadcasts.

“We are releasing these figures now to highlight two important achievements. Firstly, the development, popularity and ongoing success of DAB+ broadcast technology and devices in Australia. Secondly, to highlight that the radio industry’s innovation and investment in a plethora of additional free-to-air DAB+ only broadcast stations is also proving popular with listeners,” said Adam Lang, chair of Commercial Australia (CRA) and COO of Macquarie Radio Network.

“DAB+ only stations deliver more content to target audiences, which not only adds choice for listeners but also gives advertisers new opportunities to speak to specific listener groups,” said Joan Warner, chief executive officer of CRA. “These strong numbers show that Australians are embracing the diversity offered by the new free-to-air DAB+ stations while also continuing to enjoy their favourite existing stations via DAB+.

“The digital radio market has matured and there is an appetite for targeted advertising, the DAB+ numbers are now comparable to multichannel digital television and networks are able to offer advertisers niche opportunities and further monetise DAB+ digital radio.”

Free-to-air DAB+ digital radio launched in the five metropolitan capitals in late 2009. There are now more than 45 extra DAB+ only stations on offer in the five metropolitan capitals, including targeted formats such as sport, talk and news, children’s programming, country, chillout and dance music and short-term pop-up stations focused on events or particular seasons.

Sales of DAB+ devices have reached more than 1.9 million. Twenty-seven vehicle manufacturers in Australia are now including DAB+ digital radio and 276,822 vehicles with DAB+ have been sold.

With the addition of the number of vehicles sold with DAB+, it brings the total number of DAB+ devices in the market to over 2.2 million.

Commercial radio will join the ABC, SBS and community radio on the recently announced Digital Radio Planning Committee for Regional Australia to plan the rollout of DAB+ to regional Australia. 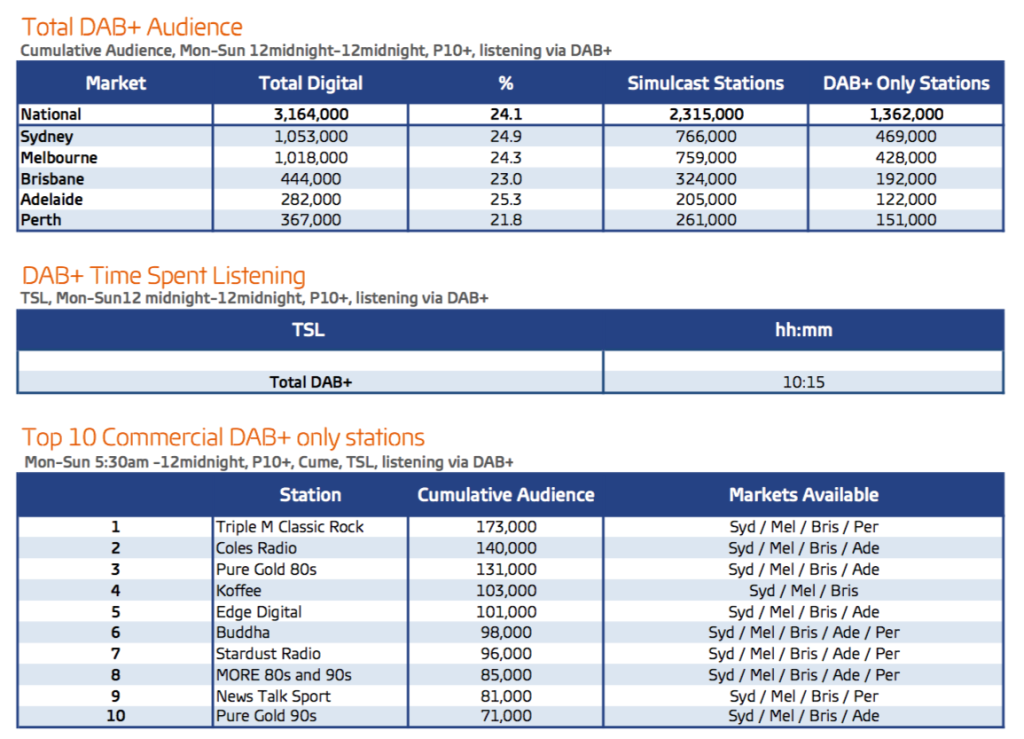