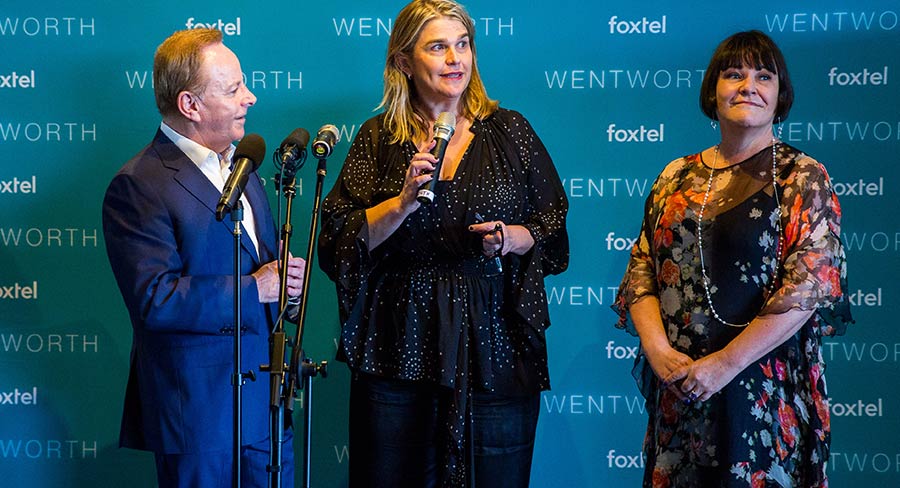 Walsh spoke with Mediaweek after the Wentworth announcement.

The TV veteran is in his element when working with talent and this year Walsh also hosted the Picnic At Hanging Rock launch event at Hanging Rock.

As he announced another 20 episodes of Wentworth had been ordered from executive producer Jo Porter and Fremantle, Walsh shared the stage with some of the prison drama’s cast including Susie Porter, Leah Purcell and Wentworth veteran Kate Atkinson. Walsh spoke with Mediaweek after the Wentworth announcement.

Is commissioning drama and then launching it the best part of your job?

Of course. The creative process is the absolute reward for having a job like mine, and each and every year is different as we adjust to changing consumer behaviour and a very dynamic marketplace. There are more and more options available to consumers and it absolutely keeps you on your game. Making a decision like this on Wentworth was very considered and we gave a lot of thought to continuing the series or moving on.

When we stacked up all of the creative opportunities from giving the show some longevity, it was obvious that this was the right decision to make.

How important is it for Foxtel to get co-production dollars?

I’ve read some commentary over the last week from some of the other players in the Australian pay TV market that Australian drama, now by necessity, has to have international money to justify the expense. That is certainly one perspective but it’s not Foxtel’s perspective. We are an Australian company, we are a proud Australian company. We make and commission television essentially for Australians, content that will resonate with our customers.

If those shows happen to pick up sales internationally, that’s fantastic. That means we can reinvest and regenerate those funds into making new stories, new Australian stories, but we don’t commission with a lens of saying it’s got to have international presales. That to us is a bonus. If we were to do that, then we potentially would lose the unique and distinctive Australian flavour to our narrative and that would be a concern.

Obviously Wentworth will now take us through until 2021. We’ve spent the last six months taking submissions from various producers for another series to replace A Place To Call Home.

Next year we’ve got a big year. We start the year with Secret City Under The Eagle, which is the follow up to the original Secret City and it reunites Anna Torv with Jacki Weaver. Danielle Cormack joins the cast along with Don Hany.

We also have a second season of Mr Inbetween and I can see that running for a few seasons. It’s certainly attracted US interest in a way that we didn’t expect, but FX has picked it up for the rest of the world and that will be back for a second series.

We have two new projects. Tim Minchin’s The Upright which is currently shooting in South Australia, and we have The End which is a co-pro with Sky in the UK and that’s shooting on the Gold Coast.

We also have Lambs Of God which stars Ann Dowd, Essie Davis in a beautiful production which is in post at the moment and we’ll have that also for 2019, and Wentworth.

The next major series commission, to replace A Place To Call Home, we will announce in 2019 and go into production late next year with a view to it being on air in early 2020.

How challenging has 2018 been for you?

My memories of this year will be change and reinvention.

Foxtel needed to change to address changing consumer behaviour, and the company and my team, we all needed to reinvent to meet the dynamic market that we’re now working in.

People are watching scripted content in a different way than they were two years ago and that’s where free-to-air television has found it challenging with dramas because what the streaming services have done is condition people to be watching dramas interruption free, and that’s certainly what we do at Foxtel. We drop all the episodes in VOD and so people watch those episodes uninterrupted.

It’s been a very dramatic year in terms of change.

Foxtel is looking at new ways to present our content and the recent launch of Kayo Sports is indicative of that move.

Have recent changes at Foxtel seen you question you future there?

I never ask myself that question because I don’t feel that I have finished my contribution to the industry as yet. I’m excited by change, I have increasingly changed the way that I approach the creative process at work. We’re bringing through a lot of young emerging talent into the business rapidly and that’s important.

Is Foxtel still examining its business model, or is the plan set for the future?

We’re not working on the model and we have our absolute business plan.

They also embrace VOD, so our on demand part of the business is doing particularly well, and we have to super serve those customers. At the same time, we need to grow our business in the streaming space.

The Foxtel cable and satellite business is robust and strong and we have a great deal of loyal customers. At the same time, we’re developing our new products to serve the market that is quickly emerging in the streaming space, and I think we’ll continue to be Australia’s first choice for home entertainment because we will have diverse methods of delivery, and still the best content available in the Australian market.