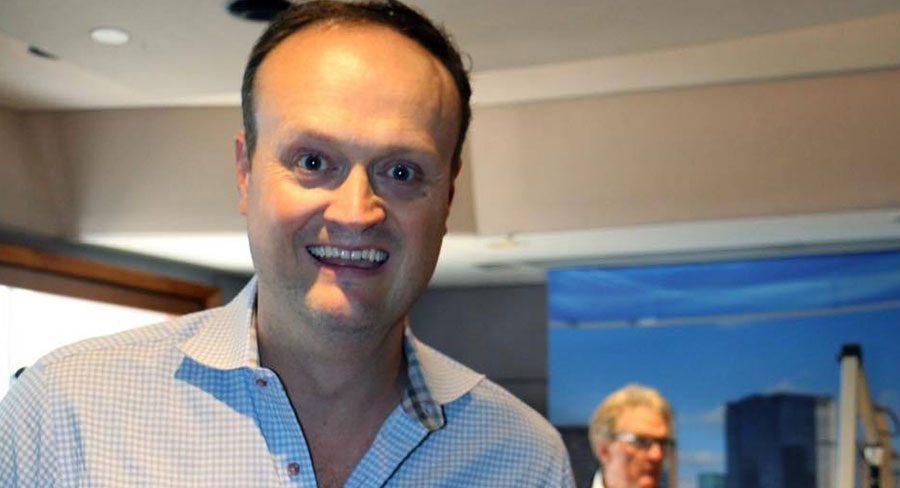 • Blanks reflects on his big break

New York’s biggest Australian radio star has been recalling how he landed his US gig as he passes a milestone in the Big Apple:

He was marrying Amalie. After the wedding I had a little idea that looking back on was quite crazy. At the time I was an out of work accountant living right near Bondi Beach, Sydney. Cash was draining quickly and no one was hiring accountants before the Sydney Olympics. After that awesome New York wedding I had some free days in the city. My crazy idea was to pitch New York radio stations to be someone’s exclusive Sydney Olympics correspondent. I rang 20 radio stations with the idea and every one of them hung up on me because they couldn’t understand my accent. One station I got past the switchboard to someone’s voicemail. That voicemail had a celebrity recorded greeting and that celeb was the late Aussie star, Steve Irwin (what an omen!). Bruce Goldberg, the guy who’s phone it was, was the executive producer of the Scott and Todd Show at WPLJ New York. He called me back straight away. Big thanks to Bruce who took a chance on hearing my idea and had me go into the radio station the following day to pitch him the Olympics concept. So I went in on a hot August morning in 2000 and after a nervous chat and Bruce throwing my sweat-drenched one page pitch paper and dreadful demo tape in the trash, he surprisingly threw me straight into a radio broadcast studio. Someone ordered me to put headphones on and I saw the “ON AIR” light turn on. I was on the air with a legendary radio duo Scott Shannon and Todd Pettingill with news guru Patty Steele and traffic star Joe Nolan weather legend Bill Evans, producer “Monkey Boy” Joe Pardavila and show booker Diana Ferrito. By this stage of the morning I was figuring out that although I was not familiar of this radio program it was a huge one! Being 17 floors above Madison Square Garden were handy indicators of hugeness. Many thanks to Scott and Todd for making my first moment on radio a fantastic experience and kickstarting one heck of a journey on your show. And also ironing out the last name of Blanks!

This radio spot was from the show I’ve been on for the last six years, the Scott Shannon in the Morning show on WCBS-FM 101.1 New York’s Greatest Hits, where we talked about my 20th Anniversary in the radio business. Some funny pictures are painted in this wild piece of radio and some wonderful nostalgia…..bravo Super Shan, Patty Steele and exec prod Louis Pulice … good fun…. and Cameron and Amalie just celebrated their 20th wedding anniversary! Glad you two got married and thanks for letting me sleep on ya couch with your cat all those weeks!