The last weekend of spring offered an interesting top five

After a burst of activity a week ago, weekend box office slid 22% to just under $12m. The last weekend of spring offered an interesting top five that was bookended with two movies close to smashing their way past $20m and included an appearance from André Rieu. 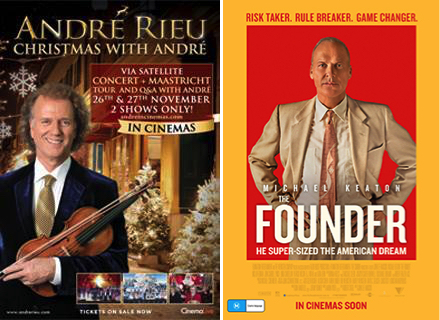 The second weekend of the first movie from the new franchise from Harry Potter creator J.K. Rowling dropped 44% and shed 86 screens. The movie still managed a pretty impressive weekend though with a screen average of $8,761 from 622 screens. The first of the five movies to be made around the new property came close to accounting for one of every two tickets sold across the weekend. After less than two full weeks in release the movie is set to pass $20m early this week. It is the best-performing movie at the box office since Suicide Squad made it to $23m after its second weekend back in August this year.

Not a name we usually see on this chart, unless it is with a Cinema Live event which was the case this past weekend. The actual show was not so much of a live event (as the distributors noted in promotional material). Cinemagoers in Australia and New Zealand saw a delayed Q&A with the great man while the bulk of the two hours was a 90-minute Christmas concert recorded 12 months ago. That didn’t stop Rieu fans pushing the gross just over $1m with a screen average of $8,370 from 130 screens.

The best-performing new cinema release was this story about the founder of the McDonald’s fast food chain – Ray Kroc. The film opened on 274 screens with an average of $3,203.

The third weekend of the sci-fi movie starring Amy Adams, Jeremy Renner (how many films does he make a year?) and Forest Whitaker was down 33% from its previous weekend. Still on 272 screens, it averaged $2,869.

Best of the rest: Bad Santa 2 wasn’t able to make the top five on debut. Sitting at #6, distributors weren’t carried away by festive optimism as they opened the film on 205 screens, which took an average of $2,876.