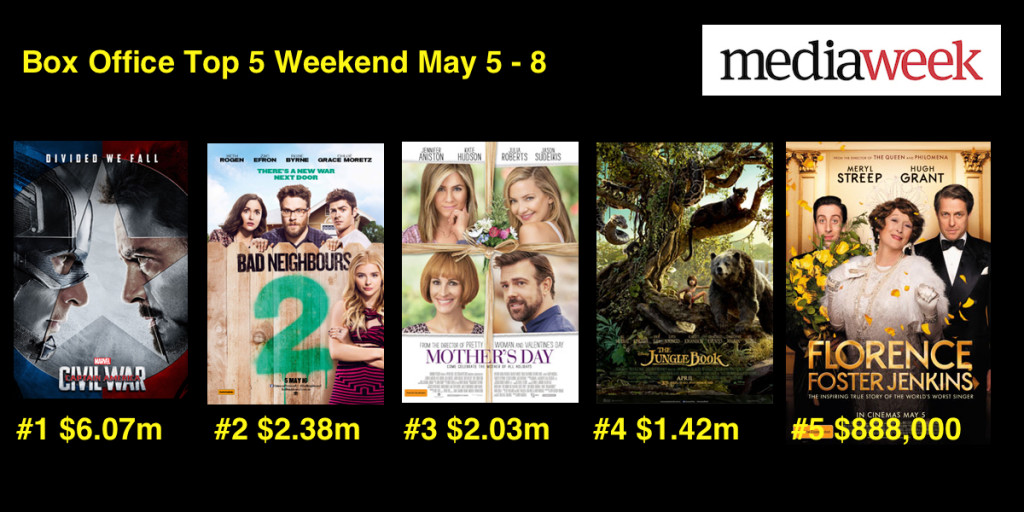 Combined weekend box office for the top 20 movies was over $15m for the third successive weekend.

#1. Captain America shed 50 screens to 627 over the weekend with a screen average of $9,683 as it earned $6.07m with a total that should soar past $25m before it finishes its second week of release. Globally Captain America: Civil War has already taken in $680 million and is on track to cross the $1 billion mark in coming weeks. In the US it opened to $182 million, the fifth highest domestic opening of all-time.

#3. Mother’s Day – Not sure how many people take their mums to movies on Mother’s Day, but maybe quite a few do given this movie took $2.03m, an increase of 71%, on its second weekend to pass $4m in total.

#4. The Jungle Book is now over $26.5m with a fourth weekend of $1.42m contributing to the total. It is the third movie in the top 20 close to or over $35m – the others are Captain America: Civil War and Zootopia.

#5. Florence Foster Jenkins – The only member of the top five under $1m with $888,000 on debut. The intriguing movie about a controversial wannabe opera singer played by Meryl Streep opened on 267 screens.

The single biggest screen average of the weekend was for the Indian sci-fi thriller about time travel, 24, which opened on just 17 screens with a screen average just over $11,000 and a weekend total of $187,000 to rank #9.