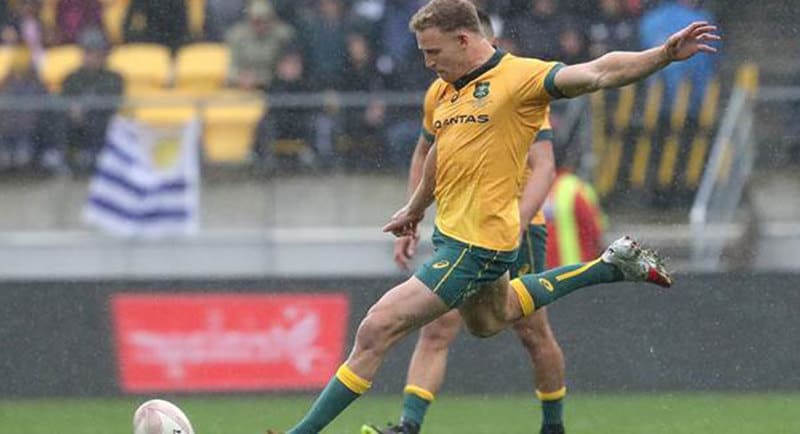 • For the first time, the Bledisloe Cup will be played over a four-game series

The Wallabies will face off against the All Blacks in the second Bledisloe Cup match this Sunday from Eden Park, Auckland. Coverage will begin from 1:00 pm on Fox Sports, and on free to air broadcaster 10 at 1:30 pm.

The new generation of Wallabies showed the world they are more than capable last week as they look to smash two of the biggest hoodoo’s in international rugby. The first, a Wallabies winless Bledisloe Cup streak from 2002, the second the infamous Eden Park, Auckland winless streak dating back to 1986.

The two sides battled to a tie last week in the world’s first Test match since the COVID-19 lockdown. After trailing 13-3 in the early minutes of the second half, the Wallabies hit the All Blacks with an almighty comeback. Reece Hodge’s monumental 60-metre penalty kick was millimetres away from giving the Wallabies a spectacular 1-0 series lead, in turn breaking a curse which hasn’t seen the Aussies win on NZ turf in 19 years.

For the first time, the Bledisloe Cup will be played over a four-game series and feature two standalone matches played in New Zealand in October on consecutive Sundays, and two hosted in Australia which will double as The Rugby Championship fixtures.

On 10 Scott Mackinnon will host the broadcast, along with Gordon Bray, and former Wallabies great and 10 News First sports presenter, Matt Burke.

An extended pre-game coverage will be live on Fox Sports from 1.00 pm with kick-off at 2.00 pm on Foxtel and to stream on Foxtel GO.

Greg Clark will call all of the action alongside Phil Kearns and Rod Kafer. On the panel will be presenter Tony Squires joined by Wallabies legends George Gregan and Justin Harrison and All Blacks great Andrew Mehrtens.

After this game the Wallabies will then return home to Australia for The Rugby Championship, also involving New Zealand, South Africa and Argentina.

The remaining two Tests in the Bledisloe Cup series are set to take place on Saturday, November 7 at Suncorp Stadium in Brisbane, before travelling to Sydney for Game 4 on Saturday, December 12 at ANZ Stadium which doubles as a finals match of The Rugby Championship.