The overall ad revenue of the Australian news media sector was down by more than $30 million YOY in Q2 2016. However, the advertising on digital increased by 14.4% YOY.

Australia’s news media sector reported $576 million in advertising revenue in the second quarter of calendar year 2016, according to the News Media Index. This is a drop of $32 million year-on-year.

The News Media Index was announced in May 2016 and is a world-first partnership between Australia’s four largest news media publishers and Standard Media Index (SMI) to enhance commercial transparency for advertisers and investors.

The quarterly index reveals all print and digital revenue, as well as whole-of-industry revenue, and is independently verified by SMI. This is the second release of industry-wide ad revenue data. 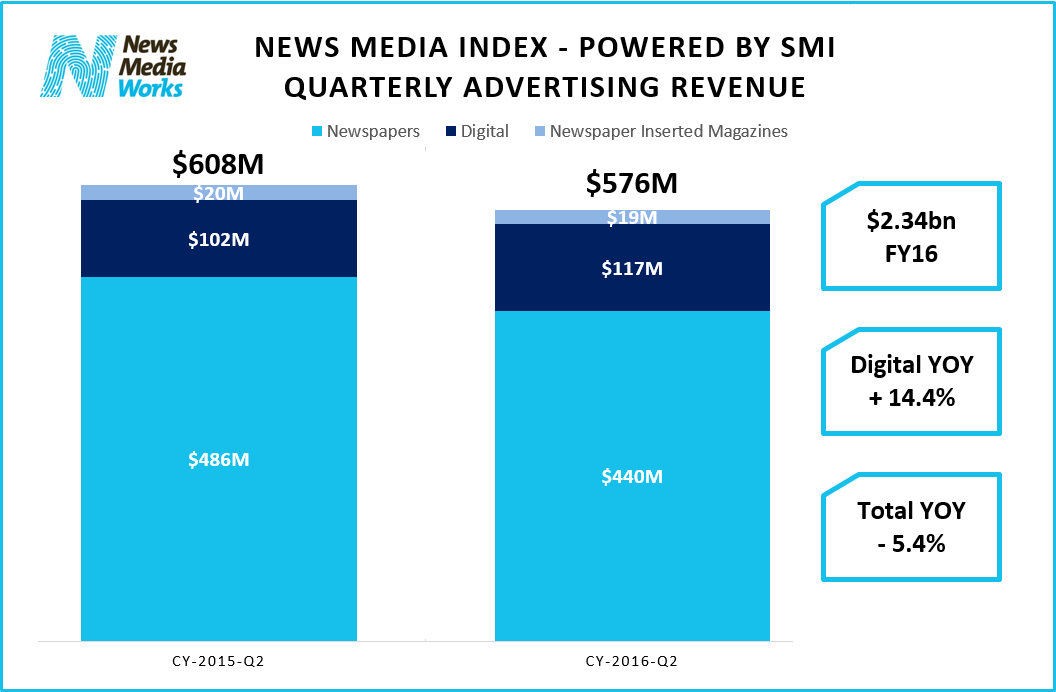 The News Media Index, which contains all ad revenue data from the publishers’ financial systems, addresses misconceptions by agency buyers, advertisers, investors and commentators about the true size of the sector. 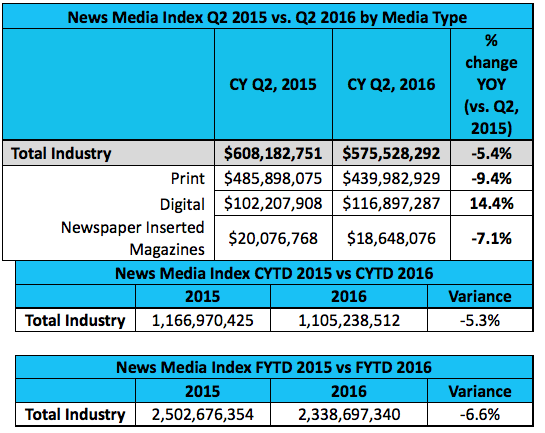 In Q2 2016, the sector’s total advertising revenue contracted by 5.4%, not the larger -13% as reported in SMI agency-only data for newspapers.

NewsMediaWorks CEO Mark Hollands said: “Our latest revenue results again illustrate the true size of the sector and the robustness of the news media business in challenging economic times.

“Growth of 14.4% in digital revenue for Q2 demonstrates the ongoing success of the industry in its transformation to create a profitable balance of print and digital news media offerings. For the entire fiscal year, digital revenues have risen 17.5% compared with FY15.”

“Importantly, direct revenues have held up well with a small decline of 1.2% in Q2 compared with the corresponding period in 2015.

“The buying decisions of media agencies continue to be out of synch with those of direct advertisers. The recent agency-only spend data from SMI shows investment off 13% for Q2 for newspapers when compared with Q2 2015, while the whole of industry picture shows the decline to be much smaller at 5.4%.

“This disparity is significant. Advertisers with close publisher relationships, and who understand the engagement of their audiences, see the value in news media brands and remain with them because they represent a successful marketing investment,” Hollands said.