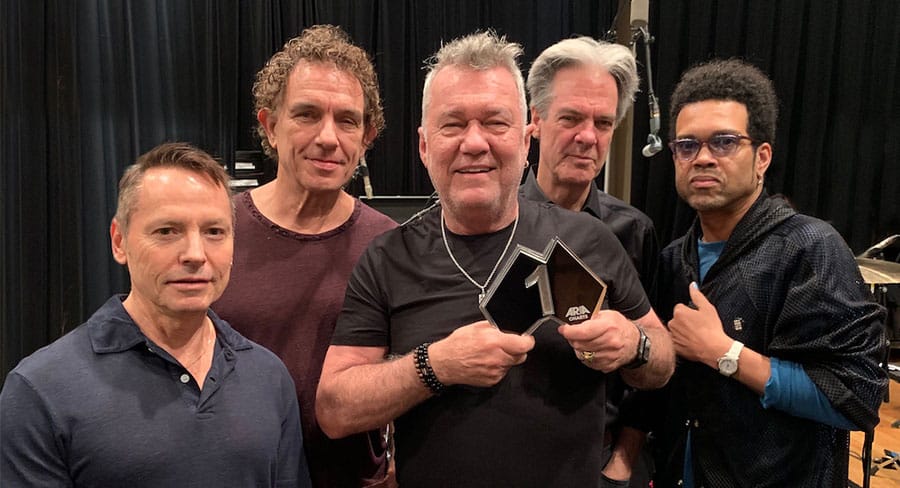 It’s the week before Christmas and just one new entry on the chart this week.

Most of the chart movement was from tunes that have been hanging around the chart for the best part of the year.

And speaking of hanging around…Tones and I remains on top spot – now 30 weeks on the chart and 20 at #1. Dance Monkey has now topped the UK chart for 10 weeks, setting a new record after passing time spent at #1 by Whitney Houston and Rhianna.

The new entry came from Harry Styles with Adore You new at #14. The track comes from his forthcoming album Fine Line.

The other interest perhaps are the major Christmas singles making their mark this week:

Jimmy Barnes has made his traditional chart attack late this year – and he brought his Cold Chisel (pictured) colleagues along for the sleigh ride. Chisel’s Blood Moon has debuted in top spot, pushing Robbie Williams from the top of the chart and stopping Michael Bublé from claiming another #1 with his Christmas album. The Canadian crooner still has one well to go to get his Christmas collection back to #1, something Graham Norton boasted about on his UK TV show last week which Bublé guested on.

Blood Moon has been well-reviewed and the band’s release of a ninth album comes three weeks prior to the Cold Chisel summer tour that starts off at what should be a memorable New Year’s Eve gig in Fremantle. Over 175,000 tickets to the outdoor Blood Moon Tour 2020 have been sold in Australia and New Zealand with A Day on the Green shows at Sirromet Wines in Queensland (1st show), Victoria’s Mt. Duneed Estate and Rochford Wines, Heifer Station in Orange, NSW and NZ’s Wharepai Domain show all sold out.

Blood Moon is the fifth #1 Chisel album on Australian charts, and the first since 1998’s The Last Wave of Summer. Chisel now also sets a new record for the longest time between #1 hits – 38 years – from Swingshift in 1981 until now.

#6 Camila Cabello with Romance. The second album from the Cuban-American singer/songwriter.

#13 Kylie Minogue with Kylie – Golden – Live in Concert. This is Kylie’s 19th time in the top 20 albums and is her third live collection to chart.