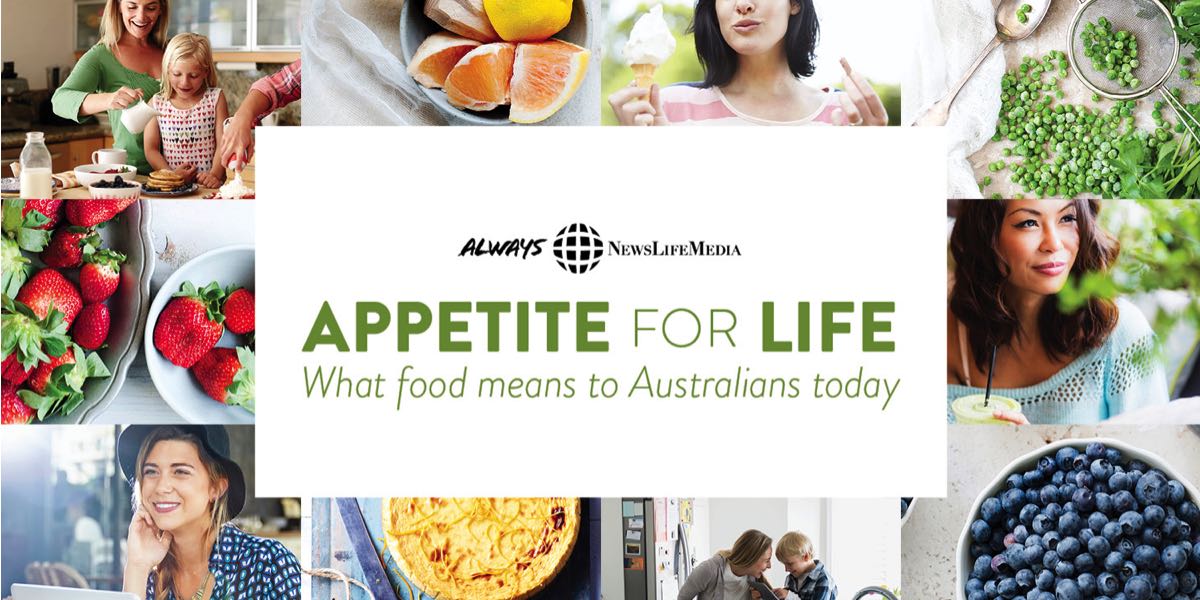 NewsLifeMedia reveals Appetite for Life research: What do the findings mean for publishers?

An average Australian will spend four and a half years in their lifetime eating, reveals NewsLifeMedia’s Appetite for Life study.

NewsLifeMedia boss Nicole Sheffield and food brands publisher Fiona Nilsson presented the findings of the study to a crowd of over 100 people at a breakfast at the Museum of Contemporary Art in Sydney this morning.

MasterChef’s Matt Preston was the MC for the morning. He also moderated a panel with NewsLifeMedia food publication editors. The panel included taste.com.au editor Brodee Myers–Cooke, delicious.’s Kerrie McCallum, Kidspot Australia’s Kim Wilson and donna hay magazine’s editor-in-chief Donna Hay. Preston guided them through each of the five key findings, plus another category, to gather comments from each editor about how the changes in the food landscape impact their brand. This article will explore the findings from a media perspective where relevant.

The key findings are:

This trend is being driven by Millennials, where food meets ideology (the values they stand for) and biology (taking a personalised approach to health).
With the changing perspective in food, Hay talked about the skew in how the audience of donna hay magazine accesses its content. A few years ago, the ratio was 50:50 for mobile to desktop. Now, at 5pm, it has changed to 90% mobile, highlighting the audience’s demand for immediacy. “Ten years ago, we were lucky to infiltrate people’s cooking repertoire maybe once every month. Now, we are infiltrating three to five times a week, which is super exciting. [We’re] somewhere where I thought we’d never be,” she said.

This finding looks at tackling the boredom in the kitchen. Nowadays, people are after recipes that give traditional dishes a modern spin, which are quick to cook – or as NewsLifeMedia puts it “fast and fabulous”.

What does this mean for publications?

For Kidspot, whose primary audience is parents, the key is to give them recipes that can be whipped up in 10-15 minutes. Wilson revealed that the websites’ audience peaks at 3-5pm when the kids are being picked up from school and when the mums are making a dash to the pantry to see what’s there.

Where Kidspot audience slides, taste.com.au picks up. The primetime for the website is dinner time, 5-7pm, when users are looking to be inspired. With Donna Hay, the audience “has a bit more time” than the Kidspot audience Hay said. So it’s more about the luxe food that can take longer than 15 minutes to make.

3. The chat and chew gap

The finding looks at the gap between what individuals say and their behaviour.

Here the finding identified the implications for brands like NewsLifeMedia is to leverage food-specific media, brand integration, as well as celebrity and user content.

From a media perspective, this finding highlights how integral social media is to consumers in their day-to-day life.

Speaking about this category, the biggest trend Donna Hay said she’s seen with her readers is the rise in “luxe foods”, where the readers want to eat food that not only tastes good and is healthy, but food that is also “Instagramable”.

In her 25 years’ career and countless national and international interviews the first “new question” she’s been asked is, “How can I make my food look better on Instagram?”

This question isn’t just asked by people on the streets but by “serious magazine titles who want tell their readers” about Instagramming their food, she said.

How the food we eat impact other aspects of our lives. Here the challenge for brands is to find a cultural connection with their audience. For example, Kidspot with mums.

This section highlights the importance of being a reliable source of information for consumers.

The proliferation of blogs and user-generated content has “worked right into our hands,” taste.com.au’s editor Brodee Myers-Cooke said. With research finding that one in three surveyed are not satisfied with the recipes they try by following user-generated content, magazines have bubbled to the top as reliable sources of information, the panel unanimously agreed. But “this hasn’t happened overnight”. Kim Wilson said it’s taken a lot of leg work.

The challenge that publishers need to tackle in the digital age is to get the readers  interested in what they have to offer in 10 seconds or less.

“Every content has to be a hand grenade that the audience is willing to pull the pin on,” Myers-Cooke said.