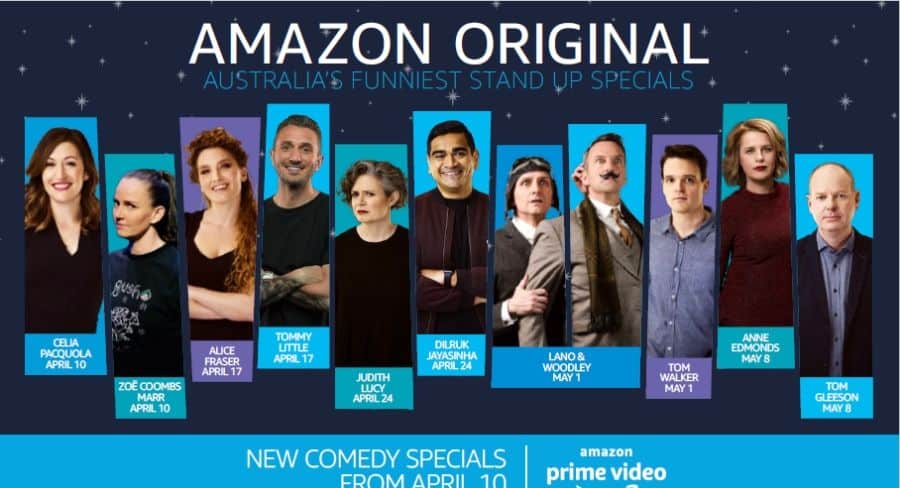 Amazon today shared the first trailer for ten Australian Amazon Original stand-up specials that will be coming to Prime Video in Australia and around in the more than 200 countries and territories.

The Australian Amazon Original stand-up specials is exclusively coming to Amazon Prime Video from April 10, with two specials being released each week over a five week period.

Gold Logie winner. Chief celebrity interrogator. Host of the highest-rated Australian quiz show on TV. All-round hard man (especially in Cairns). There’s not much Tom Gleeson didn’t do in the last year – and Australia can’t get enough of him. Celebrities such as Karl Stefanovic, LeeLin Chin and Andrew Denton keep lining up to be dragged over the coals by Tom on TheWeekly’s Hard Chat.

Celia Pacquola’s All Talk was a highlight amongst the 600-plus shows at the Melbourne International Comedy Festival, earning Celia a nomination for the 2018 Melbourne Comedy Festival Award for Most Outstanding Show. She also recently took home the Helpmann Award for Best Comedy Performer, beating out a star-studded line up of some of Australia’s top comedians. Celia is a multi-award-winning performer, but it is her genius as a writer that makes her stand-up so damn good, taking stories in unexpected and delightful directions. Sharp, frank, honest, deft and smart as hell, Celia is as good as it gets.

Idiot or genius? For many, the jury has been out on Tommy Little, but he’s here to set the record straight. Tommy is back on Australian soil after surviving the Antarctic marathon and has a cracking story to share. A life of bad choices and dubious decisions has proven to be professional gold for Tommy, who effortlessly mines his life for big laughs across the country. His 2019 tour, Self-Diagnosed Genius, proved to be his biggest yet.

After reflecting on her entire history with men, Judith Lucy has concluded that maybe it’s time to shut up shop. “Whatever it is that I’m selling, a lot of straight guys simply aren’t that interested in buying it. And I’m including people like my father.” Judith Lucy vs Men toured in 2019, exploring stereotypes, Judith’s own desires and recounting her full history with the opposite sex, leaving it up to the audience to determine whether she should ever date again.

After 12 years apart, Colin Lane and Frank Woodley have reunited to realise Col’s dream of making some important theatre, telling the epic story of the pioneers of flight, the Wright brothers. The only thing that could possibly get in the way is… well… Frank. Fly has all the ingredients that have made Lano & Woodley Australian favourites for more than 20 years.

What’s Wrong with You? – Anne Edmonds

Eddo let her alter ego Helen Bidou take her spot at the Melbourne International Comedy Festival last year but now, against her better judgement, Anne has returned and she wants to know… what’s wrong with you? Not just you, but the whole lot of you. Humanity has clearly flushed its own head down the drain and she can’t decide whether to pull you all up or leave you down there. Clear-eyed and in no mood to suffer fools, Eddo is as angry as she is over it.

After returning to the stage as herself last year (after years of performing with a neckbeard in her award-winning guise as ‘Dave’), Zoë Coombs Marr earned a nomination for Best Comedy Performer at the 2018 Helpmann Awards with Bossy Bottom. Playful, surprising and a little bit silly, it was an absolute hit with fans and critics from Melbourne to Edinburgh.

After a massive 2018 delighting and frightening audiences around the globe with his show, Honk Honk Honk Honk Honk, Tom Walker is back and, this year he’s decided to strip things back a bit. With a few less words in the title (just two, Very Very) and many less words in the show (he keeps saying this), this brand new hour promises to be, well, frankly, we don’t know. We do know, however, that Tom teaming up with the award-winning comedian, theatre maker, writer and all-round creative genius Zoë Coombs Marr to direct the show is making for the most exciting and exhilarating new partnership in comedy. Put Very Very at the top of your list.

Dilruk Jayasinha’s live shows have been received with popular and critical acclaim, and his most recent tour culminated in knockout performances at the Edinburgh Festival Fringe and London’s Soho Theatre.

Alice Fraser’s critically-acclaimed solo show, Savage, is about life, death and paper towels – a hilarious and heartbreaking show that straddles the line between comedy and tragedy. In 2015, Savage sold out seasons and earned astronomical critical acclaim at comedy festivals in Melbourne, Sydney and Canberra, as well as getting glowing reviews from some of the hardest critics in the business during Alice’s debut season at the Edinburgh Festival Fringe.