“Ahoy Hamish”, “Ahoy Andy” said the hosts of the Hamish & Andy podcast as it returned for 2021 this week. After a three-month “enforced layover”, Hamish told listeners on their first podcast for the new year – “It’s great to be unmuzzled”.

Joining them as always is long-time radio-turned-podcast colleague Jack Post. And from right at the top of the new Hamish & Andy podcast, the now radio star in his own right was under pressure. He was questioned about trying to organise free roof racks for himself or his radio station Gold from a store run by Andy’s brother-in-law and sister. (A claim Jack denies.) 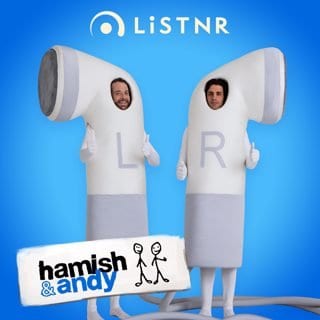 The first episode of the fourth season of the Hamish & Andy podcast had an update on the second printing of the sold-out Hamish & Andy Power Moves book.

Head of the Hamish & Andy merchandise division Horgs was on the show to explain what is happening with the new edition. “It will not be available until June,” he told the disappointed hosts and potential customers. As to why, he noted the book is printed in China and there is a waitlist at the printing plant.

Horgs also had to take a customer service call from a listener who only just received the book she was hoping to get for Christmas. The book was such a success it took some time to process all the orders, said Horgs, also pointing out that Australia Post delays didn’t help. He said a few complaints weren’t too much to worry about after sending out 30,000 copies to a largely satisfied customer base.

Hamish & Andy admitted the second print run might cost $1 extra and will be clearly embossed “second edition” on the cover in an effort to keep the first print run more collectible. The handsome-looking volume can be found in the H&A Shop online. However the only item currently in that store is currently “out of stock”.

The listener with a special skill on the first Hamish & Andy podcast show back was able to guess the type of an electric hand tool just by listening to the noise it makes. Fernando didn’t get them all correct, but it was nonetheless an impressive display.