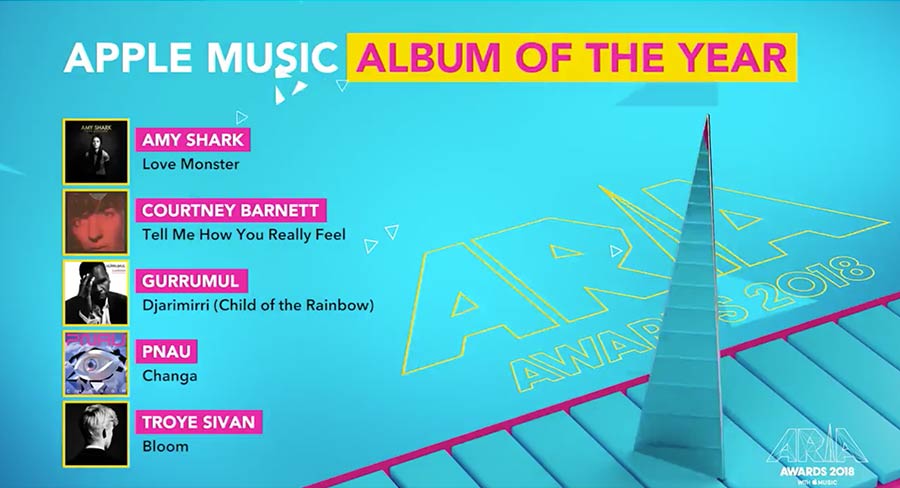 With seven weeks to go until ARIA Award winners are revealed, the nominations event was held at The Art Gallery of New South Wales.

Hosted by Nine’s Richard Wilkins, the nominees in all categories were announced.

The winners will be revealed at The Star Event Centre, Sydney, on Wednesday November 28, 2018. The Awards Ceremony will be broadcast around Australia on the Nine Network, hosted by Keith Urban.

Highlights of the nominations ceremony included Gurrumul posthumously winning two ARIA Awards for Best World Music Album and Best Cover Art, along with receiving seven nominations. His album Djarimirri (Child of the Rainbow) debuted at #1 on the ARIA Charts, making Australian chart history by becoming the first indigenous language album to debut at #1.

It was also a big day for Gold Coast’s Amy Shark, leading the nominations tally with nine. The singer-songwriter has been nominated for Apple Music Album Of The Year, Best Australian Live Act, Best Female Artist, Best Pop Release, Best Video, Apple Music Song Of The Year, Producer Of The Year, Engineer Of The Year and Best Cover Art. The two-time ARIA Award winner has had huge success with her 2x Platinum single I Said Hi and her critically acclaimed debut album Love Monster, which came in at #1 on the ARIA Album Charts. Melbourne’s Courtney Barnett follows closely behind with eight nominations for her second studio album Tell Me How You Really Feel. Released by her own independent label Milk! Records, it reached #2 on the ARIA Charts and, since the release, Barnett has toured her record globally and graced the stages of The Tonight Show With Jimmy Fallon, The Jimmy Kimmel Show, Seth Meyers and CBS Saturday Morning.

Gearing up to head out on a headline US tour, Tash Sultana has commanded world attention with the release of the highly anticipated debut album Flow State. Nominated for six Awards, the ARIA #2 charting album also cracked the top 10 in the Billboard Top Albums Chart at #8 and #3 on the Billboard Independent Album Chart.

Dean Lewis has today picked up five nominations for this year’s ARIA Awards. The Sydney artist’s 3x Platinum single Be Alright spent five consecutive weeks at #1 on the ARIA Singles Chart and is currently in its eighth week at #1 on the Australian airplay charts. The track has also scored major global radio and playlist support, having been streamed over 175 million times.

5 Seconds Of Summer and Troye Sivan have both scored four nominations for this year’s ARIAs. 5 Seconds Of Summer’s track Youngblood peaked at #1 on the ARIA Charts, spending eight consecutive weeks at the top. Their album Youngblood also reached the top of the ARIA Albums Chart. Troye Sivan’s sophomore album Bloom peaked at #3, making it Sivan’s highest-charting studio album in his home country.

ARIA has welcomed Apple Music back for the 2018 ARIA Awards and announced their support across two categories, Song Of The Year and Album Of The Year.

With Apple Music, ARIA is giving fans the power to determine the winner of the coveted Song Of The Year award. From today until November 21, fans can cast their vote by simply listening to their favourite song on Apple Music.

Denis Handlin, ARIA Chairman and Chairman and CEO of Sony Music Entertainment Australia and New Zealand and President, Asia, said: “On behalf of the ARIA Board, congratulations to all of today’s winners in the Fine Arts, Artisan & Best Comedy categories. It is a very talented group of artists and creative contributors, and we celebrate their outstanding achievement by winning an ARIA Award in their particular genre or craft.

“I would also like to congratulate all of the nominees announced today for the 2018 ARIA Awards with Apple Music. We are excited to offer Australian music fans a truly unique and memorable experience for the 32nd Annual ARIA Award celebrations, together with Apple Music and other partners. We look forward to a wonderful night of awards, music and magic moment performances at The Star Sydney.”

Dan Rosen, ARIA Chief Executive, added: “2018 has been another remarkable year for Australian artists both at home and across the globe. The artists honoured today as winners in the Fine Arts, Artisan and Best Comedy Categories show that the high quality of artistic achievement in the Australian music scene is spread across a wide range of genres.

“The Artisan Award winners exemplify that hard work, innovation and creativity are not limited to those who play the music but also those who contribute to the recordings behind the scenes. It is also with great excitement and anticipation that we look forward to November 28 when we reveal the winners of the remaining categories and bring more ARIA magic moments to the stage.”