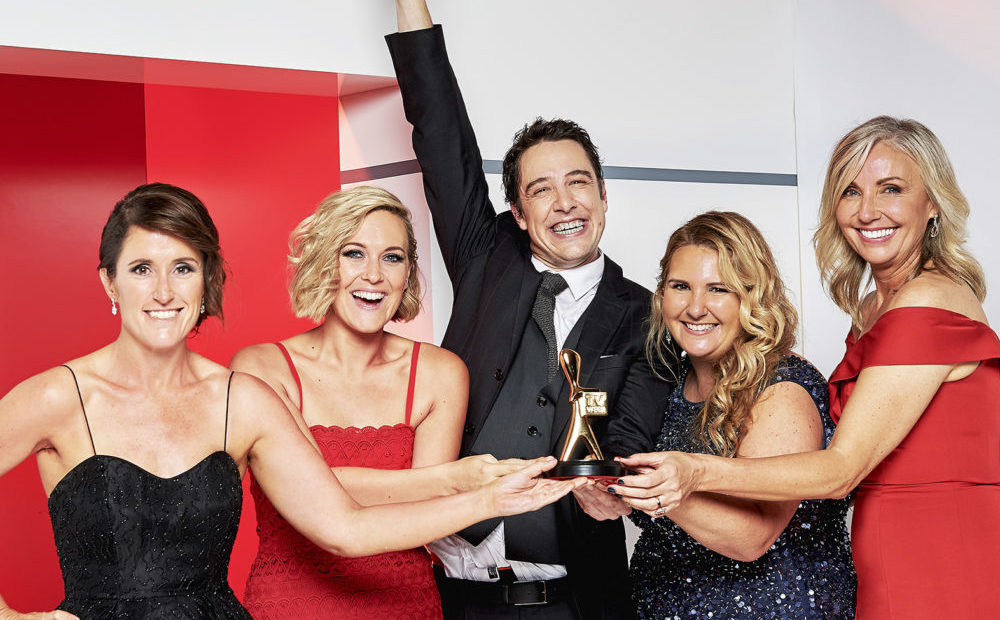 Best Presenter: Waleed Aly (The Project, Network Ten)
There was surprisingly plenty of controversy surrounding the nominations of both Aly and Peter Helliar for the Gold Logie. The are-they-aren’t-they-worthy debate seemed generally a waste of time in what is a popularity vote by TV viewers. In the end they weren’t worthy of the Gold, ending the show’s winning streak after successive wins for Carrie Bickmore (2015) and Waleed Aly (2016). The series however was still a multiple winner with two Logies this year.

Best New Talent: Rob Collins (Cleverman, ABC) (The Wrong Girl, Network Ten)
Plenty of people can put up their hand to help celebrate this win along with actor Rob Collins. His series Cleverman is a joint production by Goalpost Pictures and New Zealand’s Pukeko Pictures for ABC TV in collaboration with Sundance TV and Red Arrow International. Meanwhile his work on The Wrong Girl is another victory for Playmaker Media which produced the series about a breakfast TV show for Network Ten.

Best Entertainment Program: Have You Been Paying Attention? (Ten)
The hit Monday night series returns to Network Ten on Monday May 8, which is not a day too soon for the network. It will join MasterChef Australia to help boost the channel’s Monday numbers. Produced by Working Dog, the show started life late in 2013 and then ran for close to 30 weeks in the following three years. TEN has again ordered a similar amount for what will be series five. With the utmost respect to regulars Sam Pang and Ed Kavalee, the program boasts more talent off air than on with a production team that includes Rob Sitch, Santo Cilauro and Michael Hirsh. Working Dog member Tom Gleisner gets to pull double duty, however, hosting and working as an EP.

Most Outstanding Entertainment Program: Have You Been Paying Attention? (Ten)

Best Reality Program: The Block (Nine)
This was the fifth win for The Block and the TV veterans who are Cavalier Television – executive producers Julian Cress and David Barbour. They are joined by Nine’s EP on the format, Justin Sturzaker. Although they had a bit of a break earlier this year with no additional series of The Block or its spinoffs, things are about to get very busy. Production started this week on series 13 of The Block with relocated homes filling the empty Elsternwick block Nine purchased for this season. Meanwhile Cress and Barbour also secured the purchase of St Kilda’s Gatwick Private Hotel, meaning they could start work on the next season later this year if need be.

Best Sports Program: The NRL Footy Show (Nine)
The program’s continued success at the Logies puzzles many observers given its relatively low ratings. That audience is very loyal though. The NRL wins comes after a big week of speculation about the future of the AFL Footy Show, which has just started a new year with co-hosts Rebecca Maddern and Craig Hutchison. The show sorted its own future, however, with a big ratings surge for a regular Thursday night episode a week ago. Best Lifestyle Program: The Living Room (Ten)
Melbourne-based production company WTFN has moved into the Ten building in Sydney where it works on this show, which airs for 40 weeks every year. The Living Room has been nominated every year since it launched in 2012 and this was its third win. Special mention of host Amanda Keller too and her introduction to the Hall Of Fame winner on Logies’ night.

Best Factual Program: Gogglebox Australia (Foxtel – Lifestyle/Ten)
The series is a hit on two networks and it has now won two Logies in successive years from a total of four nominations. The business model that sees the Endemol Shine production broadcast on first Lifestyle and then a day later on Ten should perhaps be used more often by both broadcasters to help spread their investment dollars. The win can further add momentum to Mediaweek’s campaign to try to get Gogglebox on air for 40 weeks of the year instead of 20!

Most Outstanding Drama Series: A Place To Call Home (Foxtel – showcase)
This series too has been on two channels, but not at the same time. Created by Bevan Lee and produced by Julie McGauran and John Holmes for Seven Productions, the series first aired in 2013. A second season followed on Seven in 2014 before the show was dropped. An outcry from fans and some negotiating from Foxtel’s Brian Walsh saw the show return in 2015 and 2016 with new seasons on Foxtel’s SoHo and then showcase channels.

Most Outstanding Miniseries or Telemovie: The Kettering Incident (Foxtel – showcase)
While Seven’s Molly cleaned up in the Best Drama category – plus individual wins for its star Samuel Johnson in two categories – it was Foxtel and its drama series that dominated when it came to Most Outstanding series with three of the four acting awards. Porchlight and Sweet Potato Films and executive producers Victoria Maddern and Vincent Sheehan won this award plus their castmember Henry Nixon was also a winner.

Most Outstanding Supporting Actress: Debra Lawrance (Mum, Please Like Me, ABC)
After nominations in 2014, 2015 and 2016, the Josh Thomas-created sitcom was a two-time winner in 2017 in the Most Outstanding section of the awards. Executive producer Todd Abbott delivered one of the best acceptance speeches of the night, clearly moved by what this series has been able to achieve in Australia and around the world over four seasons and 32 episodes. Josh Thomas’ manager Kevin Whyte was sitting at the Please Like Me table on Logies night and his Guesswork TV business has been a backer of the series with support from the ABC plus Hulu and Pivot for the US.

Graham Kennedy Award For Most Outstanding Newcomer: Elias Anton (Danny Kelly, Barracuda, ABC)
Another winner for Matchbox Pictures and producers Tony Ayres and Amanda Higgs for one of the better dramas on television in 2016. Anton is a worthy winner while it is disappointing Matt Nable didn’t get an award for his work in the series. Ayres and Higgs could well be winners for Seven Types Of Ambiguity this time next year.

[In addition to winning a TV Week Logie Award, the Graham Kennedy Award for Most Outstanding Newcomer winner will receive a one-year management contract in LA with Australian Artists Management, as well as a TV Week photo shoot.]

Most Outstanding Children’s Program: Little Lunch: The Nightmare Before Graduation (ABC ME)
A first-up win for producers Robyn Butler and Wayne Hope in their debut as kids TV producers. If you’ve overlooked this previously, there is a fair bit of entertainment on offer for grown ups too in this mockumentary comedy series about 15 highly significant minutes of a child’s life: snack time in the primary school playground.

Most Outstanding News Coverage: Sky News Election Coverage 2016 (Sky News, Sky News/Foxtel)
A first-time Logie win for Sky News Australia after a number of nominations over the years. Election coverage doesn’t get any better than this and the channel should be a regular winner at least once every four years.

Most Outstanding Factual or Documentary Program: Conviction (ABC)
Conviction gets a repeat screening on May 2 and is an examination of how detectives brought Jill Meagher’s killer to justice. Age journalist John Silvester is the narrator and associate producer. The doco is a DD&B Production in association with ABC TV, Film Victoria and Screen Australia. Producer/director/cinematographer/editor is Terry Carlyon and co-producer is Robyn Miller.